« An Interview with Shaun Chamberlin, author of ‘The Transition Timeline’
The G20 Talks: When a Picture is Worth a Thousand Words »

An Evening in the Dark 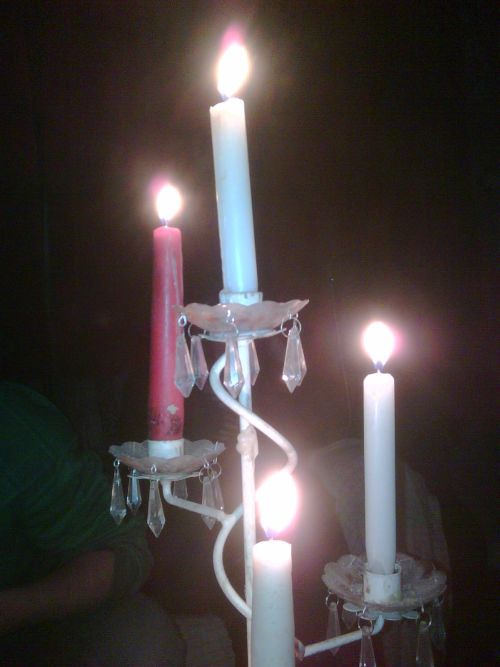 Saturday night was Earth Day, when, as a sign to the world leaders heading to Copenhagen, people around the world were invited to turn their lights off for an hour so as to make a detectable difference to energy consumption. Lights at the Sydney Opera House, the London Eye and the London Gherkin were all turned off, as well as in millions of homes around the world. Not one to be left out, at 8.30pm we duly got out the candles and switched off the lights for an hour.

Of course at the end of the day, if you have low energy bulbs, having your lights on or off doesn’t really make much of a difference to your energy consumption. It would probably make a more substantial and noticeable reduction if for that hour people were invited not to boil the kettle, put their washing machine or tumble drier on, or to use the hairdryer. Anyway, the symbolism of millions of people reaching for the offswitch for an hour is powerful, so we did.

We got out some rather nice candles, lit the fire and gathered all kids from various corners of the house. Our hour was spent playing Uno (a favourite card game), reading ‘The Faraway Tree’ to my riveted 7 year old who loves it, playing guitar with my eldest, chatting and generally enjoying the rather nice atmosphere of all being together. 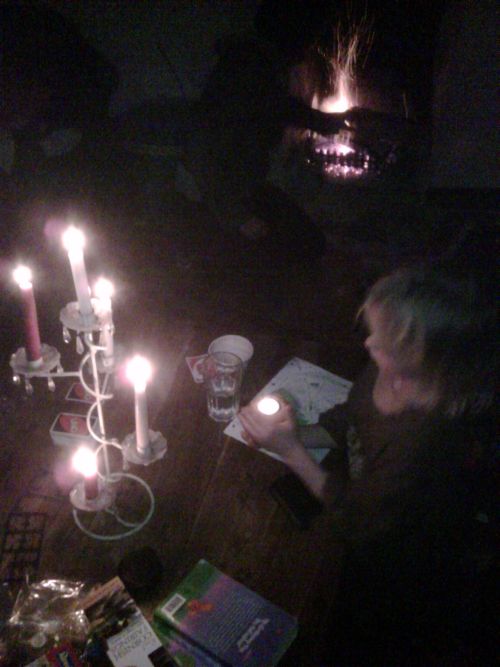 It was a great example of the multiple spin offs that can come from such things. Although, in the recent discussions here about whether one person not flying makes any difference, my sense is that we return, once again, to the power of stories, and also, almost, of ritual. To be part of an event where you know that millions of people (hopefully) around the world are doing the same thing with the same motivation at the same time gives one a deep sense of connection and re-enforcement. It also, for people with young children, creates an evening they will remember, will tell their friends about, and will also remember the reason why they did it.

Also, to know that around the world, millions of people were sitting in candlelight thinking “actually, candlelight is really nice, we should do this more often” was great too. It is another example of taking some of the fear and mystique out of some aspects of a lower energy world. It wasn’t just about turning off the lights, it was also about taking time to spend with family and friends, slowing down for a while, de-electrifying our lives for a short while….

We certainly had a better Earth Day than some.  Over at Grey Lynn 2030 Transition Town in New Zealand, a writer there had planned to do candlelit Earth Day with her family.  She explained to her dad what Earth Day was about and his succinct response was “bugger Earth Day, I’m watching the League”.  The Western Morning News on Tuesday, under the fantastic headline “Climate change candle sets house alight” told of a family near Totnes who had done the Earth Hour thing, turned the power off, lit a candle and then gone for a walk (tip for the day folks, don’t light candles and then go for walks).  They only just got back in time to avoid the fire getting completely out of hand.  So, if you spent Earth Day sitting with candles and having a chilled, quiet time… remember, you were lucky…

Hi Rob – I appreciate that this post is about the symbolism of the event. Unfortunately lighting candles is likely to cause more C02 emissions than leaving on a light bulb. One candle has the same CO2 emissions as one 7 watt CFL bulb which provides 40 times as much light! I hope you didn’t light too many candles!

See: http://www.stubbornmule.net/2009/03/burning-candles/ for the details.

As for lighting the fire – well that’s a real disaster!

Glad you all had a nice evening nonetheless!

Fair point Tom…. do the figures for CO2 from cfls include the embodied energy of them? Also, my candles didn’t create any problems in terms of mercury when disposed of…. yes, yes, I know about the fire, will be getting an efficient woodstove soon which ought to help…. it’s that or the anaerobic digestor that no-one is planning to set up anywhere near us soon to keep us warm!!

(I suspect mercury fillings in ones mouth 24/7 are much worse!)

Anyway – I’m distracting from the message of your post and the game of Uno!

For info, here’s a link to an interesting piece George Marshall from COIN wrote on why Earth Hour might not be such a good idea: http://www.guardian.co.uk:80/environment/cif-green/2009/mar/27/climate-change-carbon-emissions

I think if it’s done in the way Rob describes though, it can be great. It reminds me of a week-long power cut we had in my village many years ago, when me and my family spent each evening gathered around the fire in the living room rather than scattered ’round the house watching many TVs, and it felt really special.

Earth Hour, what did we learn? And more importantly how will we change our behaviour?

I mostly read by windup head torch for the hour and did some gardening jobs, some yoga, and tidied up our room. I also took a stroll a few blocks around mainstreet Hamilton Bermuda. There did seem to be quite a lot of lights off but not nearly enough. I appreciate the statement of solidarity with those fighting to deal with climate change but Earth Hour should provoke change.

Myself, I intend to be more careful about turning off power strips, and thus all the devices attached to them. I already read by windup headtorch most nights and will continue to. I never use the tumble dryer as we have very high quality solar drying potential here in Bermuda, though I never used it in the UK where we had somewhat lower quality solar resources. So today I hung out my clothes in the warm breeze. Later, I’ll be walking the hour or so it takes to get to my friends house for dinner and a film.

But what would it take to go further? I like this idea found on Living the Frugal Life.
http://livingthefrugallife.blogspot.com/

“Some of the blogs I read that deal with preparing for life after peak oil, or the next great depression, or political collapse strongly suggest turning off the electricity at the junction box for a weekend or a week, just to see how well you can function without it, and to see in what areas you’d like to be better prepared or equipped. I’ve never done this. But having just turned off the lights for an hour and a half last night, I can see that some sort of light other than oil lamps would sure be nice, if it came to that. Perhaps solar lanterns, or some hand-cranked battery powered lighting. Reading by oil lamps would probably ruin my eyesight sooner rather than later. It took less than an hour with the lights turned off to learn this.”

Thanks to Cliffird Wirth over at Surviving Peak Oil for the heads up on that Frugal Living site.
http://survivingpeakoil.blogspot.com/2009/03/peak-oil-financial-planning-living.html

Well….I tend to think that Earth Hour should consist of everyone turning everything off (apart from vital life-preserving things). So – I duly flicked the main switch in my house – and the LOT went off for that hour (fridge/freezer and all). Never mind embodied energy in candles – it was just me and my wind-up lantern and wind-up radio to listen to. THIS is what I think would make a noticeable impact – when it was clearly visible at the power stations that there had been a noticeable reduction in demand for power during that time.

i agree with ceridwen that turning everything off and living without any electricty for an hour once a year would be a very powefull symbolic act, and actually could be very enjoyable, think of the happy hours spent camping, when forced to sit around and play traditional games and chat to each other by torchlight…

and ceridwen keep up your good work on MSE 🙂

Yes we burn’t our beeswax candles that we made earlier in the year from our own bees and played backgammon…I hadn’t thought about flicking the mains switch. Next year if there is a next year, as in next year for earth watch not year generally!!