« Giving One of the 2009 TED Talks. Gulp.
Some Notes from the Final Day of TED Global in Oxford » 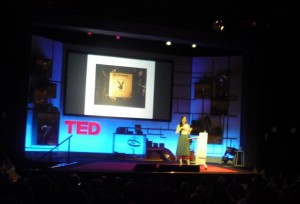 What an extraordinary day.  I missed days one and two of TED, which, if they were anywhere near as good as today, was a big loss.  A day of fascinating speakers, even the ones I disgreed with were interesting…  Set in the Oxford Playhouse, the day was well presented, well hosted, and had a great buzz. It divided into 4 sections.  I’ll just give a few thoughts on some of the presenters.  Over at the TED blog is a detailed write up of each speaker and some good photos, far more detail than I am going to manage!  So the first session was called ‘Radical Development’.

First speaker Paul Romer was, to my ears at least, dangerously deluded.  The solution to the world’s problems, he argued, was the building of new ‘Charter Cities’, in effect free-trade zones.  Guantanamo Bay, he argued, should be turned into a free-trade zone run by Canada, and we could build new cities in the deserts of Africa which could house the growing world population and be a driver to the world economy.  No talk of resource constraints, resource depletion, the possibility that free trade hasn’t been an unbridled success everywhere, no mention of food growing, no mention of lots of reasons why building new cities in the desert is really not a very good idea and that there are very obvious reasons why it hasn’t been done before.

Mark Koska talked about his invention, a new kind of syringe that could not be reused, thereby meaning that in the developing world millions of people would not get hepititus or AIDS from dirty needles.  Great idea.  Then Michael Pritchard, who has invented the LifeSaver bottle, which you can use to filter even raw sewage and it will turn it into sterile water.  To demonstrate he filled a tank with river water, sewage and other horrible stuff, stirred it up, filtered it through his invention and drank it.  An amazing thing, and the role it can play in disaster areas and in the developing world is huge.  Fantastic.  I want one.

William Kamkwamba is a young man from Africa whose parents couldn’t afford to send him to school, and so he taught himself physics by reading books, and then built wind turbines for his village using scrap materials.  Fabulous.  Really inspiring.  Then it was me.  Seemed to go OK to me, I just about remembered everything I wanted to say.  Tim Brown, a designer, then talked about the need to lift design from thinking about individual products to big thinking, taking Brunel as an example. 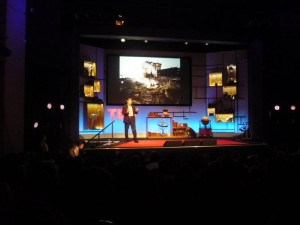 The second session was called In the Shadows, and as the name suggests, it went into some of the darker issues of our times.  First up was Taryn Simon, is a photographer who specialises in taking pictures of the things we never see, the inside of long term nuclear waste facilities, CIA headquarters and disease laboratories.  Beautiful but chilling. Then Misha Glenny, the former BBC correspondent, talked about organised crime, and how 15% of global GDP is now generated by organised crime, as he set out in his book McMafia.  Very sobering.  There was also a guy whose name I didn’t catch who is a photographer who photographs the landscapes created by oil extraction.  He was the second person (as well as me) who talked about peak oil, very passionately, accompanied by his striking images.

Loretta Napoleoni talked about terrorism, and its role in the world.  The session finished with Emmanuel Jal, an extraordinary young man.  He told the story of his youth in Sudan, seeing his village burnt down, some of his family killed, and by 8, he was a boy soldier.  His life was hellish (he refers to himself as a ‘war child’), until a few years later he was smuggled out of Sudan by an aid worker.  He now travels the world as a hip hop artist, raising money for building a school in his village.  He ended his part with a rap song about Emma McCune, the aid worker who rescued him, which moved many to tears. 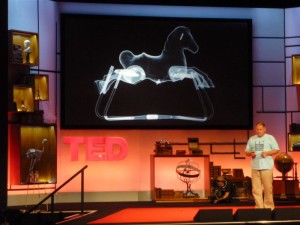 First session after lunch was called Revealing Energy.  First up was Ross Lovegrove, a designer who talked about how his work is inspired by forms from nature and biomimicry.  He was followed by music, the Radio Science Orchestra, and then Nick Veasey.  I was immediately drawn to him due to the fact he was wearing a New Order t-shirt, and his talk was very interesting too.  He is an x-ray artist, taking amazing photos of ordinary things using xrays.  Very striking.

Steve Cowley is a researcher into nuclear fusion.  His talk was about the potential of fusion as an energy source.  There are about 40 years worth of oil and gas he told the audience, but over 30,000 years worth of lithium for fusion, which can be found in seawater.  Lots of people say that nuclear fusion is 30 years away, he told the audience, but in fact at his laboratory they have already managed to create a fusion reaction.  So when might we actually see it come on stream?  Well, ah, 30 years.  Although he is clearly excited about it, for me it is so far away as to be almost irrelevant given the rapid onset of other energy depletions. 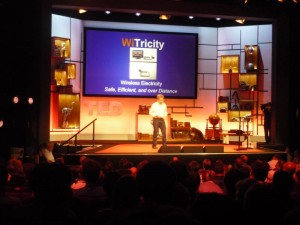 Eric Giller was the one that a lot of the geeks in the audience were excited about and had been buzzing about in the breaks.  He has developed a form of wireless electricity, which means that electricity can be sent through the air rather than needing cables.  Devices could recharge themselves withut being plugged in, we’d not trip over leads any more, and save loads of copper in cables.  The demonstration went fine, for people who find that kind of thing exciting.  He didn’t do it over great distances, just a couple of feet, but it seemed to work.

Bertrand Piccard is a French balloonist who has gone on to develop a solar powered plane, and intends to fly round the world in it non-stop.  He told the audience that his aim is not to create planes that can carry 200 people commercially, but rather it is a symbol that renewables can do anything.  It is about what can be achieved when we believe in the impossible, and when we thrown uncertainties overboard.  Very impressive, and also realistic about the potential of what he can achieve.

The last session was called Worldview Rethink.  First speaker, Parag Khanna, gave an absorbing account of how borders are changing, and the geopolitics of the world affect us all. Geoff Mulgan gave a great talk about capitalism and how, following the economic collapse we are only just starting to see the beginning of, we will need to prioritise and put other thing up there as important.  When the government bailed out the banks, he said, they were bailing out the past, not the future.  Why should we now boost consumption, rather than think about what we consume, he asked.  He called for a different kind of economy, one based on care and relationships, mentioning Transition as one of the things we need more of.  The only way to progress, he said, is by doing experiments. 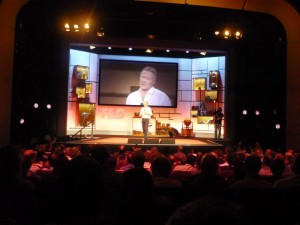 Rory Bremner was fantastic, a much needed bout of hilarity, great impressions and funny reflections on the conference.  The day ended with Karen Armstrong, a religious scholar, talking about the Charter for Compassion that will be unveiled in November.  A fascinating project, and her talk about the power of compassion was very touching.  And that was that.  Ah but no, there was more.  What was termed the ‘Bonus Session’ at another venue round the corner.

After some odd but intriguing music made by ‘Felix’s Machines’, TV comedy producer James Balog talked about the things we can’t see, which was a humourous chat. 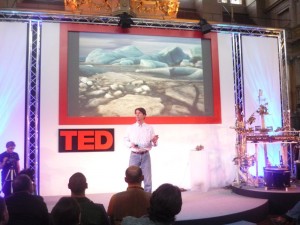 Then there was one of the highlights of the whole thing, Manuel Lima, of the Extreme Ice Survey.  He is a nature photographer who specialises in ice.  His organisation has set up time lapse photography on glaciers and on the ice sheets, and he showed speeded up sequences of huge ice fields collapsing.  Amazingly presented, agonising to watch, something everyone should see (check out their website).  The day ended with Nigeran novelist Chimamanda Ngozi Adichie who discussed the power of stories and how people often only want to tell, and hear, one story about Africa, whereas there are many more than the usual ones about hunger and war.  It was a beautiful speech, a testimony to the power of writing.

By then, I actually had a cracking headache!  So I had something to eat and headed off into the night.  What a day though.  Quite astonishing.  From the madly deluded and the frankly pointless to the life saving and the world changing.  I laid my head down to sleep with the Manuel Lima’s images of melting ice shelves in my mind.  Boy do we have a big task on our hands.

Just FYI, James Balog is the man from the Extreme Ice Survey. He’s definitely *not* a TV comedy producer! 🙂

You got the names wrong at one point… James Balog is with the Extreme Ice Survey, not the TV comedy producer.

Wow Rob I am very pleased your talk went well after reading your presentation slides before you went. I think the tireless work you are doing to spread the message is amazing and I thank you for taking it on and thanks also for finding the time to blog about it too.

In Critical Path, Buckminster Fuller explains why he does not support nuclear fusion or fission: it burns another earth savings accoun: what Earth is made of. So, caution and study his thinking bofore” Go for it!”