The Great Reskilling: what to do with left-over Runner Beans 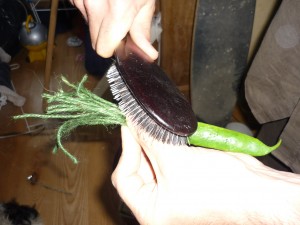 A firm brush and the fibres soon start to separate

Here is a top tip I wrote which appears in the latest edition of Permaculture Magazine, out now.

“One of the key frustrations about the end of the summer months is stringy runner beans.  You nurture them, weed them, give them a frame to climb up, yet by the end of the season, many of them are tough, fibrous, and inedible.  Last summer, I sat with a large trug of large, stringy runners, thinking of a use for them other than the compost heap.  The solution came to me after reading John Paul Flintoff’s ‘Through the Eye of a Needle‘.  I have discovered a way of extracting those fibres that prove so hard to digest, in a way that they are actually useful.  Here’s how. 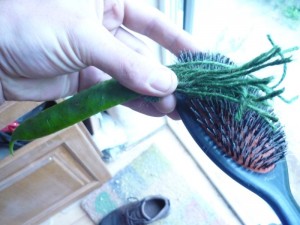 First select the longest beans.  Then freeze them.  Then put them into a pan of boiling water containing vinegar and borax for 4 minutes and then plunge them straight into cold water.  Then leave to dry for a couple of days in an airing cupboard, and then, using a metal tooth comb, start brushing the bean, holding at one end and brushing away from yourself.  The fibres emerge easily (see picture), and once you have a sufficient amount, they can be spun to form a strong fabric, akin to hemp.  Initially it can be scratchy to wear, but conditioner helps greatly.  My first product is a rather stylish jumper, knitted entirely from one year’s inedible beans, and at permaculture gatherings, it accompanies my slugskin trousers just beautifully and is much admired and discussed.  Indeed, as one admirer put it to me this summer, when it comes to fashion, I’m no ‘has-bean‘!

Rob, we all know you have problems with dates… we’re still in March!

Pity there is no photo. I imagine it might look especially fetching with some fish scale sequins.

If some of us don’t quite have the time and resources to make full size clothes (!) there is potential perhaps to create a range of “Eco-Wear” clothes for our kids Action Man, and Barbie dolls..?

Good source of clothing fibres Rob, very ingenious. But I would just make fizzy soup with them in my Vitamix.

The easiest thing is to extract the big voluptuous purple beans and cook them up,(they’re delicious!) then offer the stringy remains to your goats, compost heap or wormery!

I agree with Bev, above….dried beans are delicious in winter soups! If I have to use borax and fabric softener, spend the energy to freeze the beans, boil the water and use hours of my time to comb the fibers, spin them into “bean yarn” and knit a jumper, I think I’d rather give the pods to the chickens and let nature go to work! Isn’t that what permaculture is all about anyway?

First freeze then boil just doesn’t seem to be an energy-friendly solution… How about using the beans as animal feed?

Spaghetti growing on trees but with a permaculture twist! Shame it’s eight days early. I so hope this makes it to the Energy Bulletin!

Oh, this is about the pods; I thought from the title it would be about the beans (seeds). We prefer them as baked beans, better than Navy beans or such; our substitute for limas, which don’t grow well here (Willamette Valley, Oregon). I don’t think I’d have the patience to do more than compost the fibers. We need them there anyway. Like straw, they help with soil aeration.

As Jane has suggested spaghetti harvesting. Maybe some folk are too young to remember Dimbleby’s report?

For anyone wondering that people are on about with the spaghetti references, check out http://www.youtube.com/watch?v=27ugSKW4-QQ

Also, I just got my new Permaculture Magazine, and it wasn’t in there! Ooops.

I like the way the bean pods separate so nicely into two-ply yarn (or is that three-ply, a bit hard to tell in the photo) … how wonderful that with runner bean fiber you apparently don’t end up with roving, and there is clearly no need to spin and ply the resulting fiber, the bean “did it all for you” as it grew. why do we bother with sheep and spinning wheels anyway? … LOL

Hook, line and sinker – until the spaghetti reference. Doh!

Sadly, as this is in a permaculture publication, we can’t decide whether it is a joke or not.
Seriously though, I think peas and beans are very underrated in the UK as a future food source. Also, for the small grower, there is the attraction of being able to dry them, so ensuring a 52 week supply instead of a 2 week glut. I grow the white variety called ‘Czar’ for this. The main problem is applying just the right amount of drying heat to sackfuls of the pods. Too much heat and they cook – too little and they rot and/or germinate.
Anyone grow runner beans as perennials?

I think the reference to slug skin trousers should be a clue!

cracking me up, Rob. You need to keep track of the percentage of folks who buy into this- in spite of the hints, and the photos!

I have also indulged in humor occasionally.

“a long serious of attacks”

I can only plead an excessively low caffeine titer.

Ah.. I am reassured now… the peak oil meeting post has now overtaken the runner bean story by 3 votes! Order has been restored to the Universe.

What to do with left-over runner beans « Transition Town Farnham
4 Apr 9:14am

[…] to do with left-over runner beans 1 04 2010 A fascinating post by Rob Hopkins recently, filed under the category of “the great […]