« A Discussion about ‘Ways of Knowing’ in Transition …
Presenting: Transition Streets… » 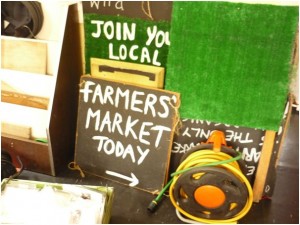 In Transition initiatives, often it is local food projects which are the first PRACTICAL MANIFESTATIONS to get established. They can be one of the first opportunities to practice SOCIAL ENTREPRENEURSHIP meaningfully, and offer a good place to start creating STRATEGIC LOCAL INFRASTRUCTURE.

(We are discussing the patterns on Transition Network’s website to keep all comments in one place. Please leave feedback and comments, suggestions for alternative pictures, anecdotes, stories and projects for this pattern here).

Probably the most obvious manifestation of the oil addicted and carbon hungry lifestyles we lead is our food system. A more ineffective model for turning oil into food is hard to imagine. In our communities, money pours out in vast quantities every day, in order to subsidise a globalised food system which is unjust, unsustainable and which has ruthlessly destroyed competition, usually in the form of the small scale grower and processor. Everyone needs to eat. Yet the current system that feeds us is so terrifyingly oil vulnerable that we are all the poorer and less resilient for it. 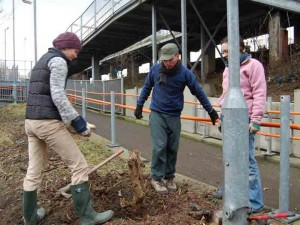 Food is often the place where Transition initiatives get started, where the first projects emerge. Here is a taster (pardon the pun) of some of the projects underway, they take many different forms. Some initiatives start by planting productive trees in urban spaces. Transition Town Totnes has planted over 200 hybrid nut bearing trees throughout the town, including almonds, sweet chestnuts and walnuts, each of which has a local ‘guardian’ who looks after it1. Transition Town Finsbury Park planted fruit trees around their local station2, and Taunton Transition Town developed their ‘Tasty Borough’ scheme with the local Council, planting traditional apple varieties around the town, leading to a dreadful pun on their website about wanting to “put Taunton Deane at the core of the apple country”. Transition City Lancaster’s urban tree growing project is called ‘Fruity Corners’3. 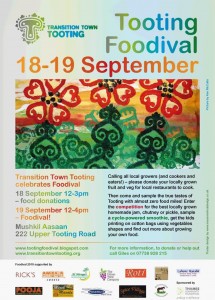 Transitions Stirling, Cambridge4, Bristol5, Stratford6, Clitheroe7, Totnes8 and Falmouth9 have begun ‘Garden Share’ schemes which match people who want to garden with people with gardens they no longer use, providing vital access to growing space, like a Dating Agency. Transition Town Tooting use food as a great way of engaging community and bridging cultural divides, with their Foodival, which runs once a year. Growers from across the area bring their surplus produce, and it is cooked by a range of local cooks in a range of ethnic styles10.

Some Transition initiatives, such as Brighton11, Tunbridge Wells12, Bramcote and Wollaton13, Ashtead14, Forest Row15, are creating community allotments, where people for whom an allotment feels like a daunting sized piece of ground, get together and share an allotment. One of the earliest incarnations of this idea was in Transition Canterbury, where they also keep a very informative blog about what they are learning and how it is progressing. 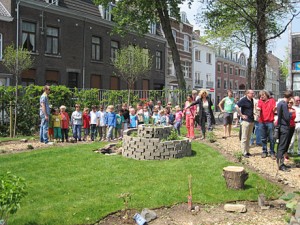 Other Transition communities, such as Wandsworth in London16, Louth17, Ashburton18 and Brighton19, set up community gardens where people learn to grow food together and to support each other. Some places are experimenting, inspired by the Fife Diet20, with eating a seasonal and local diet. Transition groups in North Cornwall and in the New Forest22 are exploring the practicalities of eating a more local diet, and what it can teach us about food relocalisation. Some places are setting up their own community-supported farms, for example Glastonbury, Matlock23, Stroud and Kippax (near Leeds). Here the community owns shares in the farm and is involved in what it grows. Transition Town Kinsale set up a CSA with a local farmer to produce potatoes and oats for its members24. Transition Town Dorchester are creating a 2 acre community farm on land made available by the Duchy of Cornwall for a peppercorn rent25. Many places produce a local food directory to help people source local produce; Forest Row, Glastonbury, South Kerrier in Cornwall26 and High Wycombe27 have all done so, Transition Cheltenham going for an online version rather than a printed one28.

Transition Stroud have gone one step further and set up StroudCo, a ‘food hub’, which gives people access to local food at cheaper-than-supermarket prices29. Transition Town Kingston have launched a door-to-door delivery of locally grown organic vegetables, called the ‘Ground Up Co-op’30. Transition Towns Totnes31, Stroud and Frome and also a number of initiatives in Somerset, have done detailed analyses looking at how much food could be grown in their area, what degree of food self-reliance is feasible. There are many many more food-related initiatives underway in Transition initiatives across the country, showing great ingenuity and creativity.

When starting a local food initiative, weaving in an element of THE GREAT RESKILLING to all aspects will greatly deepen its success and its ability to build resilience in the wider context. Finding innovative ways of ENSURING LAND ACCESS will be crucial to the success of local food projects, some of this might come about through ENGAGING LOCAL LANDOWNERS. There are some very useful models out there such as COMMUNITY SUPPORTED AGRICULTURE/FARMS/BAKERIES which have a good base of experience behind them now. Keeping in mind the need for MEASUREMENT in order to start building up a body of evidence to back up your project would also be very helpful, essential when it comes to finding ways of FINANCING YOUR WORK.

If we accept that oil is, or at least, has been, cheap energy, then anything that arranges that cheap energy for maximum accumulation of wealth – is more efficient. Efficiency in the industrial age is defined as efficiency in converting oil to wealth. And the current systems do that admirably well.

Any food produced under the current system is almost a secondary (tertiary?) effect.

And that, I think, is part of the communication problem between those striving for (industrial age/cheap oil) efficiency, and those looking to preserve the "old" economy – food, security, and shelter as they were defined before oil, coal, and the industrial age.