**A Wexford Farmstead – the conservation of an 18th Century farmstead in at Mayglass** – Roberta Reeners (ed.). The Heritage Council 2004 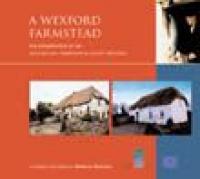 Ireland’s legacy of earthen buildings has suffered greatly over the last 40-50 years. Despite there being many excellent examples of cob (or ‘mud wall’ as it is known) houses, a large proportion of them have been lost, mainly due to a mixture of neglect, inappropriate maintenance or to an association with poverty and harder times. The skills and artistry of those who built such buildings have, almost entirely, gone unpraised, and their skills have all but died out. Still when I speak to people about the new cob house I am building, and say that it is a continuation of an indigenous tradition, most people are unaware that such a tradition even existed here. This new book will hopefully change all that.

Until Frank McDonald and Peigin Doyle’s ‘Ireland’s Earthen Homes’, there was no record of earth buildings in Ireland, and very few people out there would speak up in praise of them, for fear of being accused of wanting to drag Ireland back a hundred years. Their book is a beautiful introduction to the history, the construction and the charm of these old buildings. Its’ last chapter is dedicated entirely to the Mayglass house, which at that time was in the process of gentle decay into the soil from which it had been created. Since then, the house has been painstakingly restored by the Heritage Council, and preserved as one of the finest examples of Irish vernacular architecture. This book is a record of the house and its restoration.

Despite being written by a number of different authors, the book reads like prose, weaving a spell around the reader, until you can almost smell and touch this house so steeped in history. Originally built in the early years of the 18th century, the house was a family home until the death of its last inhabitant, Seamus Kirwan, who died in 1996. It is a traditional Wexford farmhouse, with cob walls, a thatched roof and a clay floor, built with materials from the surrounding land, and in a style that defines it as being of the area. By the time of Seamus’ death, the house was already in a state of some disrepair, which only accelerated following his death.

The restoration was painstakingly researched and carried out to a very high degree of professionalism. Restorers not only looked at the building, but also at its contents, its fabrics, furniture and other remnants of its days as a family home. This, combined with an interview with Seamus recorded just before his death and reproduced here almost in its entirety, provides a fascinating glimpse into the house and the lives of those who lived in it. Those of us involved in natural building often talk about buildings being built from the materials which are around and under the site (clay, sand, straw etc…), but what struck me about this book was how clearly it details how the house was also shaped by the people and the cultural landscape from which it arose. An article by Celestine Rafferty sets out the history of the house in terms of its inhabitants, and sets out a family tree as far as is possible. What comes across clearly is that everyone involved in the restoration, be they thatchers, furniture restorers, biologists or local historians, developed a deep love and respect for this most humble and unpretentious of buildings.

There are many books around about old buildings, full of beautiful pictures of quaint old cottages taken on misty mornings, so why is this book so different? It states very clearly and passionately that these old vernacular buildings matter, they are important and we need them around us. If we sit back and watch them crumble to dust, we not only lose their physical presence, we also disconnect from something much deeper, a connection with our history and with a people who had a resourcefulness and a frugality which, as we begin to enter a future of energy descent, we need more than at any time in recent history. These people, with no oil or petrol or machinery at their disposal, built beautiful warm homes, rooted in the landscape, using materials with almost no environmental impact, homes which stood for 300 years (up to 500 in some cases).

Compare these to what we build today, where we burn 2.5 gallons of oil for each 1m2 of concrete block wall, and then go on to design buildings that would look as out of place anywhere else in Europe as they do here, and drag building materials from all around the world in order to create something we have to spend the rest of our lives working to pay for. I wonder how many concrete block homes built today will still be standing in 300 years (or even in 50), and also whether anyone then will be remotely interested in restoring them.

Cob building has excellent potential as one of the mainstream building techniques of the future, but before that can happen, we need to overcome the stigma that is still attached to it (one of the press articles about the launch of this book referred to it, albeit respectfully, as a ‘mud hut’). This can be done in two ways, firstly by cultivating a respect for Ireland’s remaining earthen homes, and helping people to see the rare gift left by their ancestors. Secondly by building new structures which allow people to see the potential of this extraordinary building material, and its many advantages over conventional building materials. This book focuses purely on the first, and completely ignores the second. Not one of the contributors to this collection suggests that cob could be used again for building new houses – it might have been a useful addition to the book to have had a chapter looking to the future, looking at natural building in Ireland and the importance of the Mayglass house in that context.

In short, this excellent book is a much needed record of one of the Heritage Council’s most important projects to date, preserving this historic house, and offering us an insight into the people and the landscape which gave birth to this, and many other, beautiful vernacular houses. Although we live surrounded by cement, and can end up feeling that it has always been thus, this book reminds us that the current age of industrial and petrochemical building materials is a temporary blip in history. As the depletion of oil reserves starts really kicking in over the next 10-15 years, we will look to buildings such as the Mayglass house for inspiration as to how we are to house ourselves in a way which is both sustainable and also which has proven itself over time. It could prove to be one of history’s most precious legacies.