In my work teaching natural building I often found myself using cookery metaphors. Clay plasters need to be mixed to a consistency of cookie dough, clay slip needs to be like a runny yoghurt rather than milk, a good final cob should be like a loaf of bread… people relate to this much more than technical lists of mixes. It gives natural building a familiarity and a resonance that clicks with people, in the same way that Jamie Oliver on telly knocking a 2 minute chocolate mousse together does. The modern cook book is a very different thing from a Mrs Beaton first edition. Jamie Oliver, Nigella Lawson; the books produced by these celebrity chefs are awash with gorgeous pictures of delicious meals, groovy chefs at work, they make good food beautiful, everyday and relevant. 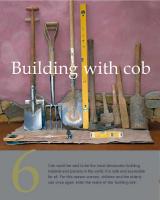 ‘Building with Cob’ is the latest addition to the cobbers library, and in many ways it has the feel of one of these cookbooks. The authors and the publisher are really to be congratulated on producing such a sumptuous book, lavishly illustrated with photos of cob that looks good enough to eat, and delicious curvy organic-looking houses. Cob has an indefinable quality that sets it apart as a building material. There is something about its monolithic undulating and gentle walls that touches people deeply. Having built a few cob structures, I feel deeply connected to this most ancient and yet most modern of building materials. I often tell apprentice cobbers on courses that they have a cobbing gene, and that once they become familiar with working with cob, they will find they know how to do it. It is instinctual.

Adam Weisman and Katy Price travelled to Oregon in the US and trained in cob building with Linda Smiley and Ianto Evans of the Cob Cottage Company, authors, along with Michael G. Smith of the classic book ‘The Hand Sculpted House’ (which seems ridiculous, as Cornwall is one of the birhtplaces of cob building, but it has all but died out there). On their return to the UK they set about promoting the idea here, and through the company they set up, Cob in Cornwall, they have done just that. They have built a number of beautiful structures around the UK, some of which appear in this book. Like ‘The Handsculpted House’, this book is deeply passionate about cob and its potential, but it focuses less on the personal transformative qualities of working with it, and more on the practicalities of building with it.

The book covers the history of earth building and the scale of its use around the world. They look at choosing a site, working out if you have suitable soils, and making mixes. Unlike the Handsculpted House which holds that the ‘purest’ way of mixing cob is by foot on tarpaulins, this book takes a much more pragmatic approach. They take no strong position as to which is the best approach, although they do argue quite strongly that mixing cob in a cement mixer is a non starter (it tends to form balls and the straw doesn’t get mixed in…). Every stage of the process is documented, from foundations through wall-raising to roofs, in a style that is easy to read, engaging and beautifully illustrated. They don’t shy away from the fact that it is very hard work. “Building with cob is an extremely rewarding and fun process. Make no bones about it, it is very physically demanding work, and you will be sure to sleep well at night after a day of cobbing. The best way to build with cob is with a team of people that you really enjoy being with, and who are not afraid to get dirty