« Permaculture at its best.
An Historic Evening In Kinsale »

Peak Oil and the Fine Art of a Good Shave.

I know it is a bit early for New Year’s Resolutions, but I have already made one of mine. I am going to teach myself to shave with an old fashioned razor. What’s this got to do with **Transition Culture** and energy descent you may wonder? Well, read on.

I did grow a beard once, and it’s not an experience I wish to repeat. Facial hair grows to a point where it becomes unbearably itchy under the chin, usually the point where one shaves it off. Only those determined to grow a beard persevere beyond this point. I did it once, when I was travelling in Pakistan many years ago, when it seemed like a useful tool for blending in in certain situations. It looked terrible though, and the one photograph of it has thankfully disappeared over the years. Despite having firmly decided from that day on that I certainly am not a beardy kinda guy, I also, like I suspect, many other men, have a love/hate affair with shaving.

I love being cleanly shaved, but hate the faff of getting to that point. I also hate the expense of razors, the throwing away of razor heads, and the industrial infrastructure that exists to provide me with the wherewithal to do something that people did perfectly well for millenia before. That is why I have resolved to buy and learn how to use a cut-throat razor. 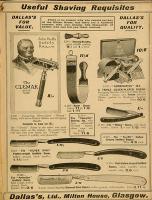 Traditionally loved by football fans and barbers with premises next to sausage factories, cut throat razors are making a comeback, and also for me represent relearning one of the basic skills that will be needed in an energy descent culture. When the globalised supply system that keeps me in Wilkinson Sword super 3d twisty turny hi-tech blades becomes unreliable, a beard is not an option, sorry. I still hold that the best shave I ever had was in India, with a cut throat razor, sharpened on a leather strop, in a little roadside barbers. I was initially wary, visions of Sweeney Todd running through my head as I reclined in the chair, exposing my all-too-vulnerable throat, but once he started I have to say it was utterly blissful. When he had finished, and I thought that was it, but, joy of joys, he lathered me up and we were off again! Bliss.

One of the things that most renewed my interest in traditional shaving was an article on the net called “A Cut Throat Business”, by James Whittall. He writes;
>Absolutely nothing is more masculine than a shave tool that can take your head clean off. Straight razors practically drip testosterone from their unprotected blades. These bad boys are the reason safety razors exist. They are unassailable icons of dangerous living.

>At times called the open razor or cutthroat, straight razors are making something of a comeback as men rediscover the nearly lost art of the traditional shave. And don’t kid yourself: straight-razor shaving is an art – one that takes practice, the rock of eye, and a steady hand. Rush the job and you’ll be reapplying your Adam’s apple with Krazy Glue. 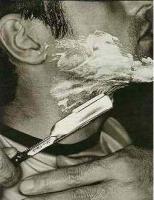 He then goes on to set out a very clear and passionate guide to shaving with a straight razor, looking after your razor, keeping it sharp, how to shave yourself and not end up with a face looking like a Quattro Staggioni pizza.

He provides some links to some wonderful resources, which if you are interested are worth checking out. These include the fantastic Razor Central, which covers everything from choosing a razor and sharpening it, to the practicalities of shaving different parts of your face, Classic Shaving, with its thorough guide to ‘stropping’ (keeping the blade sharp using a leather strap – hard to see how the word also came to mean huffing about in an angry mood as my kids are wont to do on occasion), and Uniclectica who set out clearly the tips you’ll need to looking after your blade.

This then leads on to where to actually buy the things from. You could try Carter and Bond of London, Executive Shaving, the English Shaving Company, or Eurocosm.

Luke Leadbiter has written a book called “Teach Yourself the CutThroat Shave”, printed on card so you can stand it up in front of the mirror while you teach yourself to shave. So, I’ll let you know how it goes. Being a bit of a coward, I think I will try and find someone in the town here who already does it and who can initiate me into the fine art. Feels like something I’d be more confident about if someone showed me, rather than learning from a book. It’s a bit like learning to use a scythe really, it’s all about learning when something ‘feels’ right.

Like so many things that we have forgotten due to the great binning of traditional knowledge that took place during the Petroleum Interval, shaving is one of those essential life skills that we can reclaim from the multinationals. We will need to develop a certain degree of self-reliance when it comes to keeping the nation’s chins stubble-free. Of all the most notable peak oil advocates, Richard Heinberg is the only one who comes to mind who doesn’t have a clean shaven chin. From my meeting some of the London peak oil community at October’s conference, it was also clear that beards were to the minimum. In the same way that Heinberg has written of his conscious decision to stay in suburbia and make the best of it, I wonder whether his decision to keep the lower slopes of his face forested was similarly consciously thought through? For the rest of us, we need to start planning for our post carbon stubble. I must add at this point that my partner Emma is a little worried about this, having observed my accident prone nature over the years. I once did a course in stained glass window making, from which I returned every week dripping blood from some gash or other.

At Fuelling the Future, Quentin Gargan gave an excellent presentation where he spoke about just how long it takes to learn how to garden a particular piece of ground. He based his thoughts on his own experience on a West Cork smallholding, and how much understanding needs to be built up in terms of soil, varieties that will grow well, pests, dry places, wet places. His conclusion was that we need to start now to build up the skills and the understanding. Similarly, the idea that we will just be able to switch over to using cut throat razors without having taken the time to hone the art could lead to lots of nicked chins is somewhat deluded.

Like gardening or insulating the house, now is the time to master the skills, while we have the luxury of time and space and resources. Either that or grow a beard. And as you can see in this carefully constructed artist’s impression, in my case at least, that’s not really a scenario worth contemplating.

Nice one Rob, had me in stitches…

(Hope it doesn’t leave you in stitches too!)

I’ve been considering switching to a cut throat shave for a while, but didn’t realise they were such a big investment. Over £150 if you buy a belt with it!

Very interested to hear how you got on. Frankly, it has taken me an enormous amount of effort to “master” this method of shaving.I have been using an open razor off and on over several years and only gradually taught myself how to hone and strop the razor to the required degree of sharpness (which is damn sharp!) and whilst I now have developed the neccessary dexterity to give a decent shave all over the face to the point where I am pleased with the results, it has been learned with the aid of much styptic pencil! Open razor shaving is definitely an art.