« Please support the Powering Down Blogathon.
Steve Bell on Iraq »

Amid the ocean of ‘sustainable’ concrete salesmen, property developers and petrochemical insulation companies, three things stood out at EcoBuild as beacons of post-peak sanity. The first of these was the strawbale lecture theatre build by Barbara Jones and Bee Rowan of Amazon Nails. It was a beautiful example of strawbale building, with sections of the walls lovingly plastered. It was great to be able to do a talk about natural building in a strawbale theatre. They had built it in just two days, with sections of it being plastered with lime showing the different coats. 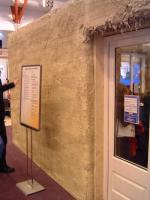 It was, speaking as someone who has done a bit of bale walling myself, a lovely bit of strawbale building, fine straight walls and perfect corners. Barbara has been doing strawbale since 1995 when the got a scholarship to go to the US and study strawbale building there. I was lucky enough to do the first course she ever did when she came back from the US, which was held at Redfield in Buckinghamshire, where we built a shed. I then worked with her to build Marcus McCabe and Kate Mullaney’s house in Co. Monaghan. She is deeply passionate about strawbale and has become incredibly skilled about it and has pioneered many new techniques and approaches. Barbara, Bee and their team of helpers were incredibly busy all day talking to people. She said that things are going mad for them at the moment and they can hardly keep up with all the work being offered to them. They are currently working on 2 strawbale bungalows in the middle of Birmingham, and a huge strawbale auction rooms somewhere near London. 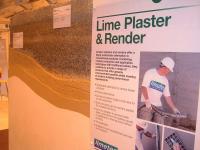 The second thing was a great hemp and lime house, built by Hemcore together with Limetec. The outer walls, as well as a demonstration sample of the floor and the roof were built of hemp and lime. Internally the walls were made from unfired clay bricks. As a building system it promises maximum insulation in the envelope and maximum thermal mass on the inside (cob would have been just as good yet infinitely more sculptural). Unlike all the hemp and lime I saw done (and did myself) in Ireland which all came from France, all the materials in this house were from the UK. 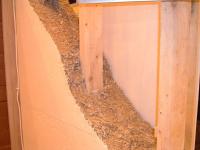 I asked the rep about using clay instead of lime, but he didn’t know much about that. They had done a lovely job with this show house, with walls sections showing the various layers of plaster. I think that hemp is one of the most exciting things that we should be growing far more than we do. The land that the ‘keep the cars running at all costs’ brigade think should be growing biodiesel would be far better used to grow hemp, for food, fibre and building material (and another hundred or so uses…). This house was a wonderful example of the potential of this material. Hard to build in curves though….

The last thing that got me excited was the work of Earthship Biotecture Europe in Brighton. I chatted to Daren Howarth who it turns out I had met years ago… lovely guy, besotted with the Earthship model. They have already built one there, which has been very popular. They are now applying for planning for a development of 16 Earthships as a small settlement, an amazing project. 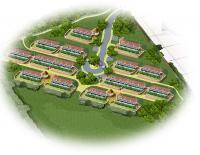 I asked Daren, as we stood looking at the plans for the project (see left) “so which one of them is yours?”. He replied that the land around Brighton is so expensive that he can’t afford one himself, even though he has dedicated the last few years of his life to pushing forward their development. There’s selfless and passionate activism for you. My only reservation with the Earthships is the amount of cement they use, but I may be behind the times on that, that’s my memory from what I read about the first ones. They are certainly striking and impressive structures, and are designed as whole self-sustaining eco-systems. You can see a short film about Earthships here.

So, despite the bulk of the exhibition’s exhibitors appearing to have somewhat loose definitions of ‘sustainability’, there were some things that gave hope for the mainstream adoption of building practices that can nuture the local rather than undermine it and which could be continued into a post-peak world. In the case of the strawbale and the hemp and lime houses, they were especially powerful because people could see them, feel them, smell them. Hopefully some people went away with their ideas of what a house can be profoundly altered.

My dream is to build a house out of hemp, so you’re post about how it’s being done was such a thrill to read and look at!

I put a blurb about your post with a link and one of your photos here: http://www.43things.com/things/view/1151351

Thanks for spreading the word!

I am from Sri Lanka.

I have a plot of agricultural land bordering a paddy field and I want to build a cottage in that plot of land using only natural material.

I would like to get your advice on this, as I am in the reseach phase of my project and want to finish it soon.

Clay- straw bricks is one option I am thinking about.