Notes From the Book Launch for Stephan Harding’s New Book ‘Animate Earth’, plus your chance to win a copy of the book!!

Last week in Totnes Stephan Harding gave a talk to launch his new book ‘Animate Earth – Science, Intuition and Gaia’ at the Civic Hall in Totnes. What follows is both a record from my notes of his talk, followed by another great **Transition Culture** competition giving you the opportunity to win a copy of the book. The introduction was by Fritjof Capra (which I missed, arriving late…oops…). Stephan co-ordinates the MSc in Holistic Science at Schumacher College, where he is also Resident Ecologist and is a widely respected authority on the Gaia theory and on the new understandings of science arising from systems theory. He is a gifted and engaging speaker, presenting relatively complex ideas with humour and clarity. 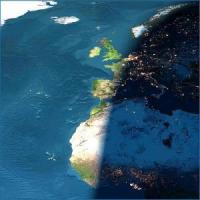 He began by outlining the environmental crisis that underpins his approach and which motivated his writing the book. He showed a number of charts, all showing exponential upward curves, pollution, climate change, losses of biodiversity and so on. We live on a planet in crisis, he said. Our very society is changing, everything is on the move. We are living through the 6th greatest extinction in history and it has been caused by our culture, the same culture that has educated us, made us what we are. Stephan said that he felt very concerned about this, the incredible loss of complexity and diversity. Most books on the environment write from within the same paradigm that caused the problems in the first place. The title of the book, ‘Animate Earth’ comes from the latin, *’animus’* meaning ‘soul’. He asked the question “can we bring a sense of soul to science?”.

To begin telling the story of the book he went back to the time of the Greeks. Hesiod (700BC) wrote about Gaia, he saw the Earth as a personality, with wisdom to be tapped and from which we can draw inspiration. He termed the phrase ‘anima mundi’ or ‘soul of the world’, a mysterious power that move the wind and the birds and so on, also of the knowledge or soul of the world, being full of knowledge and meaning.

All indigenous peoples have held this view, seeing the Earth as sentient, full of soul. We have now lost this sense. How did that happen? This is very complicated, Stephan said, but at some point historically it was pushed out of the picture. Francis Bacon wrote “we must endeavour to establish and extend the power and dominion of the human race over the Universe”. For Galileo everything in the Universe could be reduced to mathematics. Descartes wrote “I have described the Earth and the whole visible Universe in the manner of a machine”.

They all saw the Earth as having no soul, as not being ‘animate’. From this we have evolved this terrible misunderstanding which has led our culture to believe that the world is an inanimate object to be used. Is it a surprise therefore, Stephan mused, that we have ended up in our current crisis? ‘Animate Earth’ draws in part on the work of Carl Jung and his insights into why our culture has gone so wrong. He developed what is now called the ‘Jungian Mandala’. This has four elements arranged like the our cardinal points. These are Thinking, Intuition, Feeling and Sensing. We now need to develop a science that enshrines these values.

He first explored the element, **Thinking**. To explain this he turned to Gaia Theory. In Gaia Theory we are seeing ‘anima mundi’ returning to our culture, through the work of Lovelock and Margulis. In the 1960s science held that the world had two element, the Biota (all the living stuff, the flora and fauna) and the Abiotic Environment (rocks, water, atmosphere and so on). Science at that point held that the rocks ran the show, that the Biota was a second class citizen.

The Gaia Theory was a major paradigm shift, as it postulated that there were feedback loops between the two, that the Biota had a huge impact on the abiotic, that the two are tightly coupled. The term ‘Gaia’ to describe this system of emergent self-regulation, was coined by novelist William Golding, who was a good friend of Lovelock’s. Gaia Theory is much more than just a theory. The concept of Gaia is an ancient archetypal idea, for the first time in 4,000 years scientists within science talked again of Gaia as a living being.

Stephan talked of the idea of Gaia in action, the idea that if you understand Gaia you can be, as it were, ‘Gaia-ed’, she can take over your psyche. He then went on to talk about these tiny plankton-like things called coccolithophores, only 4 microns across, unicellular beings which photosynthesise and live in huge amounts in the ocean. They like particular areas of the sea, not tropical seas, in fact they especially like the coasts off South Devon it transpired! They are found all over the planet, and live at the surface of the ocean. The amazing thing is how they regulate the Earth’s climate.

As they proliferate they release sulphuric acid, which acts to seed clouds and generate rain. The clouds that they seed are not just any old clouds, rather the kind of dense white clouds that reflect solar energy back into space. These tiny beings, which would conventionally be seen as irrelevant, create massive clouds which greatly affect the climate. He quoted Lyn Margulis, “microbes rule the Earth”. So the process goes that the coccolithophores bloom and release di-methyl sulphide (DMS), a form of sulphuric acid, this forms clouds which then shade the sea and cool the surface and lead again to further blooms, a feedback loop.

This feedback loop is much more complex in reality, he said, but it illustrates the point. So why do these tiny beings emit the DMS that seeds the clouds? Do they do it for the good of Gaia? No. To combat their drying out? This could be part of it as DMS does prevent their drying out. One of the most likely explanations is dispersal. The DMS can help the algae disperse. When the coccolithophores bloom they quickly use up the nutrients in the sea, so they either die or they need to move to fresh waters. When they emit DMS and create clouds, the clouds rise and the resultant updrafts suck algae up as water vapour which is then carried until they are dropped down later into more nutrient-rich waters.

He then moved to the second element of the Jungian Mandala, **Intuition**. He led a guided visualisation imagining ourselves as coccolithophores riding along on the cloud on the way to new waters. We can, he pointed out, use intuition to draw us into new ways of seeing the world. The third element is **Feeling**. This connects to Deep Ecology and to its statement that “all life has intrinsic value, irrespective of its value to humans”. The final element is sensing, sensing the wind and so on, feeling a deep connection to the Earth and all its processes. All beings have the right to exist, independent of their value to humans.

And that was that (I’m sure I missed a lot out due to only being able to write so fast…). I am reading his book at the moment, and am finding it a very readable and informative account of the Gaia Theory but somehow it goes much deeper, almost acting as a mediation on Gaia, providing a deep connection with her and her intricate processes. As someone who had all enthusiasm for science driven out of me by education, and whose head seizes up when a formula appears, the way Stephan presents ecology and science makes it accessible and fascinating. He writes about relationships between different elements as if it were a drama. This is a wonderful book, one which I am really enjoying, and one which is deepening my understanding of Gaia Theory and making it alive, relevant, everyday and yet also sacred. It feels to me to be a book of the most profound importance.

Our dear friends at Green Books have very kindly offered a copy of Stephan Harding’s new book to the lucky person whose correct answer to the following question is drawn first from the hat.

*James Lovelock, the originator of the Gaia Theory, is also responsible for an invention for which history probably won’t thank him quite so much in the long run. Is it;*

*a. Nylon tights
b. The satellite TV dish
c. The microwave oven
d. The ‘nodding dog’ often seen in the back of cars.
e. The mobile phone.
f. Barney the Dinosaur (as in “super-dee-dooper”)*

Hi Rob. Found you again by following the link from Walnut Books. I like the article for Stephan Harding’s book. I was considering a visit to Bath June 8th to hear him speak about it but am not sure I will make it. You article was very informative and enough to make me want to get a copy anyway. I will guess the answer to your quiz is it b) the satellite TV dish?

A quiz question for you what does Stephan Harding and Matt Adams have in common?

Hope you and family are well