« Margaret Wheatley – Bringing Chaos to Dartington… (in a manner of speaking)
Is Our Collective Oil Dependence an Addiction? Your Thoughts Please… » 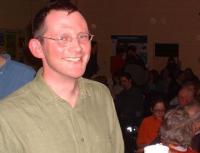 Over the next couple of months I am doing a few talks in various places, which you might be interested to know about. Do come along if you can. I keep trying to record any talks that I do but I haven’t yet worked out how to edit sound files in such a way as to be able to put them on the Net. The schedule at the moment is as follows;

**Tuesday 18th -Wednesday 19th July.** The Fifth International Conference of the Association for the Study of Peak Oil and Gas (ASPO-5), San Rossore (near Pisa), Italy. ‘Plan B – enabling relocalisation as a response to peak oil’.

**Wednesday 16th – Sunday 21st August.** Shambala Family Camp , somewhere in Devon. One talk on Energy Descent Planning and one on Natural Building (cob, strawbale and so on…).

I think that’s it for now…. there will be an evening class in Totnes starting in September called **Skilling Up for Powerdown**, I’ll let you know about that as soon as it is firmed up…