5 Great Things About the Eden Project #1. The Edible Landscaping…

For a long time I have had the idea of a restaurant which is landscaped in such a way that the food that people eat is grown around them. It would be a kind of more ethical version of “I’ll have the third lobster on the left please, could you boil it alive for me”, being more of a “can I have the third Lollo Rosso on the left and some of that rocket over there…”. It has long been a dream, but until last week I had never actually seen it in reality.

Outside the restaurant at the Eden project is a beautiful example of edible landscaping. It is one example of how the Eden team do everything with great care and attention. The mix of colourful salads, beautifully and eye catchingly arranged, was one of the finest examples I have seen of how beautiful food growing can be. Unfortunately the salads were not for the visitors to eat, not producing enough, instead the salads grown there are for the employees to take home. 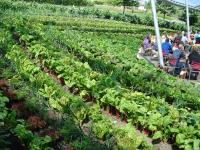 What was important about it for me was that here is an example of edible landscaping seen by many thousands of people, which is beautiful, eye catching, enticing, and completely kicks into touch the idea that food growing is not attractive. By placing this garden right next to where people are sitting to eat, it makes the connection very clearly with the food we eat and how we need to bring its production closer to home.

**Tomorrow’s Great Thing About the Eden Project – the Biomes….**

Here in Southern California we have an inspirational example of how beautiful growing food can be, the Path To Freedom urban homestead project. Their website includes marvelous pictures which show their property, together with notes about their incredible yields under intensive growing.

Additionally, a local professor has been doing a series of Edible Estates projects. The most recent one was a one-weekend ‘makeover’ of a suburban property, ripping out the lawn and replacing it with edibles. (The website seems to contain text notes – I didn’t see many photos.)

For more references about Edible Landscaping, I have put online the bibliography from an Edible Landscaping talk I gave in Los Angeles in April; your readers are welcome to it. Several of the books are UK and Australian publications. My list includes books with full-color photo layouts showing ‘how beautiful food growing can be.’

Patrick Whitefield, in Permaculture in a Nutshell, emphasises that in the future our food will be ‘gardened’ rather than farmed. He cites yield and land use figures to support his conclusion.

Here in Los Angeles, I encourage people to try edible landscaping because I believe that by getting one’s hands back into the soil, one reconnects with the earth, its cycles, its seasons. Growing our own food ‘touches’ us, inside and out, body and spirit. Then it becomes undeniable that we must change our way of living with respect to the planet.

There is a problem that I see with this, unfortunately. A majority of people these days are absolutely ignorant of agricultural practices, and will get completely squeemish if they see a single insect on a lettuce leaf. My son, who has recently become a vegetable entheusiast (thanks to “Supersize Me”) nearly rejected eating salad one night because our backyard lettuce had a few aphids on it. And having worked in food-based retail before, I know that a majority of people (particularly the affluent) are even more particular and stubborn about the “appearance” of their food than my son is. Most return customers to such a restaurant will probably be both who are familiar and comfortable with the enormous biological community that is nature. The moment someone more timid sees a bird fly over and do what birds normally do to cars, it will be “Check, please.”

Hey, Joanne…Although my initial inspiration for growing my own came from my dad’s relatives (almost all homesteaders and the children of pioneers) and my mother’s aunts (who, in 1970’s, still had their victory gardens), the Path to Freedom project has truly been a modern inspiration to us. I pass along their website to any of my friends also interested in “saving the world” as a way to show them what they can do to truly make a difference, since lobbying the government is like lecturing a blind and deaf man.

We have been integrating veggie gardens into our landscaping designs. Great fun and excited clients.