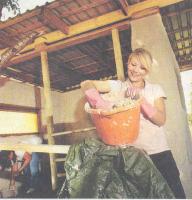 Young people hanging out on street corners and in bus shelters has been a regular part of British life since street corners and bus shelters were invented. Sometimes they can get a bit too bouncy, and sometimes can get up to all kinds of mischief. For the most part though, they just want to ‘chill with their homies’ and talk about teenager stuff to other teenagers (which usually, sadly, tends to revolve around ringtones…). Naturally sometimes this can be threatening to other people who use bus shelters and street corners. Responses up to now have ranged from the police chasing them off the streets to ASBOs (not ASPOs) and trying to herd them into youth clubs. But natural building? How might cob, strawbale and clay plaster have a role to play?

A lovely story in yesterday’s Guardian called Eco-shelter gives teens a place to go focused on a village called Nassington in rural Northamptonshire. The local youth had been getting somewhat fractious in the bus shelter and people had complained. What were the local Parish Council to do? Leader of the Council, Sarah Rodger, who sounds very young and groovy for a Parish Councillor, called a meeting between the Council and the teenagers. She discovered, according to the piece in the Guardian that “they didn’t want a one-night-a-week youth club, they wanted a place where they could just be together without adults – a bus shelter of their own.”

Hence the idea of the eco-shelter was born. It was conceived and assisted by the kids as well as the local Connexions youth service, Northamptonshire Young Farmers, and the Local Network Fund. A group of young people put together a grant application to the Camelot Foundation to fund the building. Although unsuccessful, Northampton County Council’s youth service was so impressed with their innovation and commitment that it stumped up the £3,500.

The resultant shelter has car tyre foundations, strawbale walls and lime and clay render. The article in the Guardian writes that “its strawbaled insulated walls and roof are covered with a lime render”. A lime rendered roof? Either that’s a mistake or its a novel and somewhat puzzling technique unique to this project…. looks more like corrugated iron in the picture. The kids were involved in the building process, learning the techniques and the joy of working with clay and straw. For many of them it was their first experience of natural building. According to the article, for Lucy Kisiel, 17, it was her first lesson in woodwork and lime rendering. She says “the whole process has been fascinating and really fun. We had no idea what the parish council did before. Now we get on really well with them.”

What a great thing. What can we learn from this project? Firstly it addressed a real need, a need percieved by both sides. It sought to bring together rather than accentuate ‘them and us’. It was fun and artistic. It was also well thought out, taking only a week to build (that’s going it some!). If it works for this project, when why couldn’t the building of a new building at a school be done like this? The planting of a garden? I’d be fascinated to know whether the kids feelings about sustainability had increased or decreased through involvement in this project. Struck me that this story debunks the myth that young people have no interest in anything to do with sustainability. The trick is to design projects that harness their latent creativity, while at the same time meeting a need. Be interesting to see what, if any, vandalism the shelter gets over the next few years! Wonderful.

thanks for the inspiration. Here in our small town, we are setting aside an area in the community center for a teen cafe. They will sell tea and cookies and play music and talk. Dana

This pale imitation is the yearning of socialism straining to break free of its capitalist bonds.

Let’s get the present farce of aa society we live in over with, so we can make the whole world run like this example, finally. Nothing idealist about it: this stuff just worx — if you can remove the narrow-minded vested capitalist (and its bureaucratic) interests out of it.

Unfortunately the hut has been seriously vandalised. It may have by been people from outside the village, but we are not certain. The building is now roped off. The render on large areas of the outside walls has been knocked off and the rain is now penetrating the straw bales underneath.Very sad after such an effort