A Trip to the Agroforestry Research Trust’s Forest Garden. 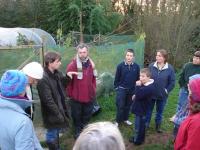 Martin Crawford started his forest garden at Dartington 15 years ago. It has now reached a point where it is very developed, and was referred to in Dave Jacke’s Edible Forest Garden books as the best example of a forest garden he has seen. Martin is internationally recognised as one of the foremost practitioners of agroforestry in the world, (but amazingly very few people in Totnes have heard of him!).

The forest garden covers about 2 acres, and is filled with a dazzling arrany of plants, chosen for their edible, medicinal or other uses. In essence, a forest garden is a garden modelled on a natural woodland with its many layers, but which only uses species which are functional, be it fruiting plants, medicinal, or any of a wide range of uses. Martin also runs the Agroforestry Research Trust who produce information literature as well as an extensive catalogue of trees, seeds and plants. He showed some of the Skilling Up For Powerdown students round, and introduced us to a number of unusual trees and shrubs.

The first tree we visited was **Szechuan Pepper** (*Zanthoxylum schinifolium*)(see right), a tree that grows to about 5 metres. After 12 years it produces around 1½kg of small fruit which are like pepper corns. These can be dried and ground, being a pepper substitute. It is a high value crop, being worth about £450 per kg, so each tree could yield about £675 a year, more than many farmers earn from 1 acre. It tasted just like a spice my partner brought back from India, which the Tibetans call “erma”, which is used in their noodle soups. It does amazing things to your tongue, making it feel as though it’s been taken over by some strange tingling sensation…

All over the ground in the first part of the garden we went into was **Japanese Blackberry** (*Rubus tricolour*), a low growing, shade tolerant shrub. Martin grows it more as a thick ground cover that, as a byproduct, produces an edible berry, which looks like an orange raspberry, and fruits in July and August. He also grows various **Eucalyptus** species, as medicinal trees. There is a very medicinal oil in the leaves, which on a larger scale can be made into essential oils, but which can also be put into boiling water and used to make a steam bath to ease congestion with a cold. 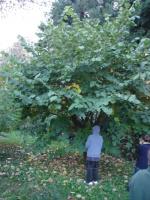 One of my favourite discoveries was the **Plum Yew** (*Cephalotaxus harringtonia var. drupacea*). It looks like a small yew tree, grows to about 4 metres high and makes a fruit which looks like a dark brown acorn, pointed at both ends. It is delicious, tasting like butterscotch, rather like a creme brulee to me (I was alone in this opinion!). He grows a **Large Leaved Lime** (*Tilia platyphyllos* – see right) as a salad plant. The leaves are edible like salad, and Martin’s tree has been coppiced, meaning it makes leaves lower down than it would otherwise do. Martin harvests the young leaves as salad green throughout most of the growing season.

He showed us a **Flowering Quince**, often found in peoples’ gardens as an ornamental, but most people don’t know that it can be eaten. It is sometimes known as the Northern Lemon. It is not a fruit you can just eat, like an apple, rather it is cut into small pieces and sucked like a lozenge, tasting like an acid drop sweet. He grows a range of **bamboos**, both for both timber and for food. Apparently they emerge from the ground at the diameter they will be for the rest of their lives, they just grow taller, incredibly quickly. Martin mentioned that it is the only plant he has ever actually heard growing!

The garden contains a number of nitrogen fixing trees and shrubs, adding the nitrogen to the soil that otherwise would need to be provided artificially. These include **Italian Alder** and various **Acacias**. He grows a variety of **Hawthorns**. Even though our native hawthorn isn’t much to speak of as edible fruits go, there are other varieties from around the world that have more going for them. The Chinese Hawthorn is very productive, large red fruit that are best cooked, and a couple of other American Hawthorns which were a bit sweeter.

He had a **Medlar** tree, a fruit prized by the Elizabethans, which is picked when the first frost has been on it, stored for a couple of weeks in a cool place and then eaten. It has a flavour a bit like date puree, and is often eaten with brandy and cream. Martin makes medlar jam. He had a large Mulberry, which he has to keep top-pruned to stop it getting too big. His variety is the **Illinois Everbearing Mulberry** which makes a black fruit like an elongated raspberry, over a long fruiting season throughout the year.

The ground cover in most of the Forest Garden was perennial herbs, such as a variety of **mints**, **tansey**, **oregano** and **lemon balm**. These act as a ground cover and also, Martin believes, produce antiseptic oils to the health benefit of the garden as a whole. They are also useful herbs, for medicinal and culinary purposes, as well as attracting beneficial insects. He grows his **raspberries** not on canes, the logic being that as the fruit grows, it weighs down the plant, making it harder for the birds to find the fruit. He has some recently planted **Almond** trees, which have yet to fruit, but which he feels confident will.

One of the other trees that was an exciting discovery for me was the **Chinkapin**. Walnuts and sweet chestnuts are huge trees, far too large for any garden. The Chinkapin however grows to about 5 metres, and looks like a sweet chestnut, producing a smaller nut. So now a garden owner can grow nuts too! It was a fascinating tour, Martin being incredible knowledgeable on the subject. Despite the increasing darkness and the subzero temperatures, it was a great trip.

What’s the hardiness zone there?

Thanks Rob – now I have four reasons to come to South-West England! (You’ll have to guess the others.)

I find Martin’s dedication and knowledge very inspirational. We need gardens all over the country that are growing unusual edible perennials to see what does well in different areas (various soil types and weather conditions).

Earlier this year my partner’s father , Colin Bullough, very sadly died of a brain tumour. He had just retired and was looking forward to tending his newly planted forest garden in Aberdeenshire, Scotland. This is about the most different climate there is from Devon within the UK (it’s cold and relatively dry in Aberdeenshire, compared to warm and damp in Devon). He had been inspired by a course he had been on with Martin. When I saw Colin before he bacame ill he proudly showed me his quinces, fruiting hawthorn’s, eleagnus bushes, autumn raspberries and many other wonderful and unusual plants – nearly all of which had been sourced from Martin.

Colin was completely new to this type of gardening having previously never heard of such strange things – but he was inspired (he also had a well-thumbed copy of Patrick Whitefield’s Forest Garden book). Being into Peak Oil and sustainability I enthusiastically told Colin how important an experiment his Forest Garden was. I’m not aware of any other such edible gardens in Aberdeenshire. He was too modest to admit that it was as important as I believed!

In his memmory, his family are now tending and expanding the garden as a memorial to him. His son has just ordered many new plants from Martin that we will plant this winter.

For me this is a wonderful example of how people can be inspired by seeing something new – even in their later years – and really start to make a positive contribution to our knowledge of perennial edibles – a crucial part of our future. So if you’re sitting at home thinking it’s too late or your garden’s too small to plant unusual trees – I’d say ‘No it’s not! – get on the phone to Martin and order some tasty trees!’

Hardiness zone is zone 10.
So really as mild as you can get, at the moment, and the same for the Mediterranean.
However it is wet as hell, so is really quite a lot different from the Med. But frosts and minimum temps are the same.

I am pretty sure it is the height of the bamboo that is what is unchanging not the diameter, otherwise the bamboo would always be pencil thick, since that’s how it starts.
Rather that each shoots grows its FULL height each year, regardless of age.
And the shoots get thicker each year.
Think that’s how it is, anyway.

hello, i an currently designing my 2nd forest garden. is there any possibility that i could visit in the next 3 weeks or so. also do you know any one who has grown a garden for the use of textiles and growers plants such as fibres and dyes and do they make there products on site or run work shops?