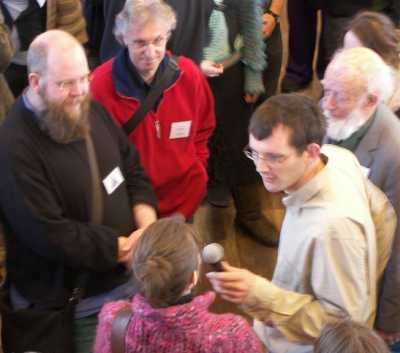 The next day began with a great exercise, mapping the Transition movement physically in the hall. Firstly people were asked to arrange themselves geographically as a huge physical map of the world. Sophy and I then walked among the assembled throng, stopping in various places to ask how their Transition initiative is going, and so on.

A second session of workshops then followed, and I didn’t get to go to any, as I was giving a lively and well attended workshop myself, on the 12 Steps of Transition. This meant I missed such gems as workshops on cities in Transition, reviving the cottage economy and engaging young people, but hey, you can’t have everything. 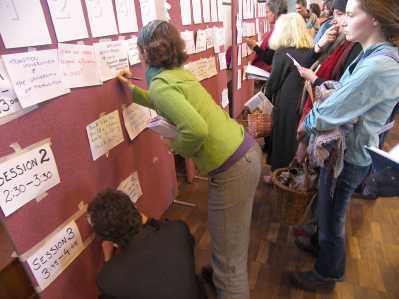 The next few hours were taken up with Open Space. At the beginning, Naresh explained the process and how Open Space works. Then people began to come forward and to offer their questions for sessions. 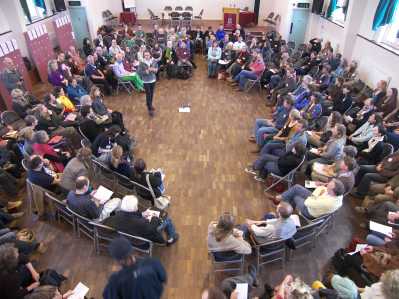 The timetable soon filled up, and sessions covered subjects such as “working with local government without committing suicide”, dealing with backlash and making Transition projects more inclusive, as well as some that just offered the opportunity for people to get together and sing. One of the sessions featured our first stab at making the conference more virtual, with John Lough from Portland in the US, video conferencing via. Skype to participate in the session on Transition Cities.

The 3 sessions of Open Space drew to a close with a feedback circle which garnered peoples’ responses to the process and to what they had discussed. This was then followed, for some of us anyway, by a football match, where the ethic of co-operation not competition was temporarily but ruthlessly ditched. The game ended with my team unexpectedly pulling back to 3-3, with Sophy Banks limping off injured halfway through and Hide from Japan emerging as a major Transition footballing talent, and it was a wonderful change from sitting and talking, recommended for any conference. 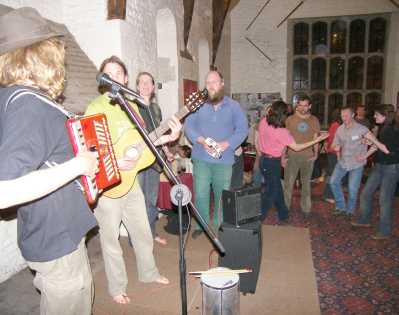 The evening featured an Open Mike hosted by, appropriately, ‘Open’ Mike Grenville from Transition Forest Row. A wealth of strong acts got up and did poems, songs, stories, even yours truly did a rather ropey version of ‘Egyptian Reggae’. It all ended up with the guys from Moving Sounds, who were here filming and running workshops, leading an amazing percussive shake-down that had the whole place up and dancing into the early hours.

You can see many more images from the weekend here, thanks so much to Mike Grenville for being the official photographer.

A fantasic weekend, many thanks to all involved, both the organisers and the delegates who made it what it was.

As your keeper Rob I suspect that the real end score should have been more like 4-3 against, but I am sure that we can just forget about that “dis-allowed” goal :o)

Excellent event, Steve and I have been trying to work out exactly how come we’re STILL talking about bits of conversations and workshops and THINKING soooo much about it all….am beginning to think Rob ‘n co. brainwashed us…just what was in that chocolate cake pudding?

We’re very inspired and really happy on getting back to see how many of our veggi seedlings had emerged when we got home….finding it most difficult to work today!

Oh go on then, Rob’s obviously too modest, but the Transition world deserves to know that it was 3-3 thanks to a Hopkins hat-trick!