« Something for the Weekend
2008 Transition Network conference film premiered »

Edible Edges: a walk around Totnes with Patrick Whitefield. 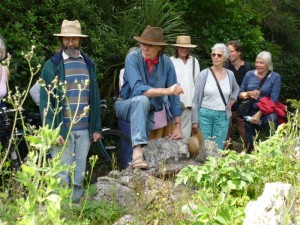 ‘Edible Edges’ was a 3 hour walk around Totnes on Saturday 28th June which looked at the food growing potential of our urban corners and unloved spaces, attended by over 20 participants. The walk was in the company of Patrick Whitefield, one of the UK’s leading permaculture teachers and writers, and author of, among other things, the seminal Earth Care Manual. The day raised a number of important questions about the practicalities of growing food in urban areas, the possibilities and the challenges. 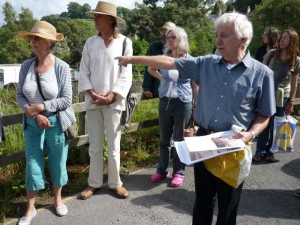 The walk began in Heath’s Nursery carpark, in the centre of the town, with a talk by David Heath, son of George Heath who had previously run a market garden on the site (the story of Heath’s nursery is told in detail in The Transition Handbook. David wove a compelling picture of a vibrant garden, the bustling shop it supplied, as well as the hard work it took to run the garden.

The walk then visited five different sites across the town to look at the challenges and the opportunities inherent in trying to weave some degree of productivity into them. I can only tell you about the first four, as I had to leave before the end. The first one was the lower section of Heath’s Nursery car park, which is ringed with grass and features two south-facing walls. We looked at the tension between growing vegetables or growing fruit.

Vegetables take a lot more attention, a lot more input and are more prone to being vandalised. Fruit takes a lot less looking after, is ideal for just having a few work days through the year, and, as Bob Flowerdew remarked when he was in Totnes last year, gives you a higher return for the amount of energy you put in. In a place like Heath’s Nursery, the group concluded, the best option would be to grow fruit against the south-facing wall.

The second site was the Civic Square in the centre of Totnes. This features two planters containing fairly dull ornamental shrubs. The Civic Square is home to a great deal of Saturday night revelry, and after much discussion, it was decided that it was probably best to not change anything here. As a rule, generally the best places to start, both in terms of having any chance of producing useful yields and in terms of sustaining the energy of those involved, are those where crops are safe and protected, as opposed to the opposite. 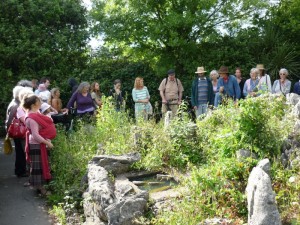 The third place was a rather overgrown rockery near the Rugby Club. Situated in a rather shady area, the group felt it would be good for a medicinal garden, although by the end it had come round to the idea of a nut tree underplanted with Nepalese raspberries, too prickly to warrant trashing, low maintenance (autumn fruiting raspberries being much less labour intensive than summer fruiting) yet still productive.

Then it was on to Totnes train station. The stationmaster, Colin, showed us round, and talked about the gardening he already does. Little known fact for you (I didn’t know this)… there is a small pond on Totnes station which contains a very rare iris that was planted there by famous Irish writer Sean O’Casey (immortalised, among other places, in Dexy’s Midnight Runners’ song Dance Stance), who lived in Totnes for a few years at one point. The iris in question had nearly died out, but now people travel great distance to get cuttings of it for their own ponds.

Anyway, our initial thinking was that a train station could be a good place to introduce edible elements, but Colin talked about, in spite of the CCTV coverage of the station, the amount of damage incurred by those returning on the last trains on Friday and Saturday nights. Even the hanging baskets are often to be found scattered across the platform.

From there the group went on to one final place which I missed, but I understand that that was a very interesting look at some land close to houses. Having access to Patrick’s great experience of reading land, choosing species and creating practical gardening projects added a great deal to the group’s reflections.

What became clear was that creating food gardens in urban spaces is fraught with difficulties although it is not impossible. Patrick summed it up very well, when he said that what we are trying to do is to put food producing systems in place in one paradigm, one that places no value on food growing and sees it often as an easy target for a spot of vandalism, in order that they are in place for a different paradigm, one that sees urban agriculture as an integral and necessary element of the urban landscape. This is like many aspects of Transition, trying to put systems in place now before most people even realise there is a problem that needs responding to.

It is like designing permaculture farms. We need diverse, polycultural farms which support a range of enterprises and crops and serve local markets, yet these systems must be set up in an economy which encourages and idolises monocultures and which strives to supply global markets. Various solutions have been proposed for tackling the ever-present danger of vandalism. One of my favourites was mentioned in a talk I saw years ago by Catherine Sneed, who said that she was involved in fruit tree planting in urban areas working with prisoners. When the first planting was mostly damaged, she decided to try a different tack, bringing the prisoners to plant the trees who were from that part of the city. “Now nobody messes with our trees”, she said.

So, lessons learnt? Vegetables are best grown in places where there is some degree of protection, where they are overlooked and/or looked after. Fruit is more suitable, but again, in places where there is a lot of people passing, they need more protection. The ideal is to make more land available for intensive gardening, such as allotments, community/school gardens and even market gardens. While we will need to see a significant fall in land prices and a major change in priorities for sites such as Heath’s nursery car park to be returned to its former horticultural splendour, there is still much we can do, with some determination, forward planning, and some help from our friends.

Dear Rob,
Thanks for this excellent report on a very pragmatic subject. It’s helpful to see how others are evaluating potential growing spots in terms of a number of factors that include the current paradigm.
Corinne

yes – very interesting. I think the big message here is about ownership. I understand that many TTs are concerned about inclusion – a m(iddle cl)ass movement. Engaging disaffected and disenfranchised sections of society needs creative and multifaceted approaches. There is a story about the legendary Bromley-by-Bow well-being centre in London. Someone from the centre found some’youths’ vandalising a nearby park. He stopped and talked to them. The next day they were fully engaged creating a mosaic/cobbled path across the park with a local artist. So vandalism was transformed into craft. The young people now had a positive and socially acceptable means of marking thir territory and would thence become co-guardians of the site. Get people involved. Make the thing theirs.

Interesting piece, Rob. I’m left wondering how the fruit and veg are to be harvested and used once they’ve been planted. Would you like people to just help themselves, or are you planning some sort of organised gathering/ditribution/sael of the produce? Keep up the blog, it’s the one I head to first on my RSS reader.

This was a very helpful and practical exercise, and I immediately want to incorporate such a food walk into our ecovillage design course later this month. We have taken on as a practicum exercise to redesign the downtown centre of Hohenwald, Tennessee, from the old (1930s) courthouse to the recently remodeled rail station 3 blocks away. Having read this, my head is already swimming with ideas for the courthouse lawn and the vacant lots near the railroad tracks, but I need to leave much of this to the imagination of the participants. Excellent post!

I was in Beauvais in France a month ago and saw an amazing little public garden in the town centre. Did not have a camera at the time and am desparately trying to get hold of pictures.

The jardin was surrounded by a mixture of espaliered apple and pears mixed with beech hedges.

The small beds and “rooms” within the jardin were divided by paths lined with herbs, cordon fruit bushes and vines, with more vines and roses tumbling over arches and trellises.

The beds housed a mix of fruit, vegetables, herbs and flowers, gooseberries, globe artichoke and chard, in full flower, alongside rosemary, chives and dahlia, kale, tomato and pepper transplants and loads of annuals.

The whole triangular plot covered the same area as a smallish town plot – about 30-40 foot on the short sides. There were a couple of crafty seats and “sculptures” as well.

I think that since the jardin was hedged with three entrances, it was partially protected and that planting within “hedged” beds provided a second psychological barrier to damage, even though much of the top fruit could be picked from outside.