A Great Transition Event at Conway Hall, London: hope springs forth in the cities 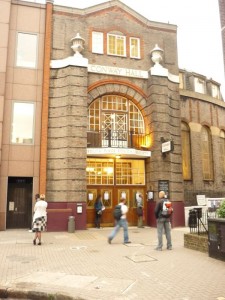 Attended a wonderful event in London on Tuesday night, organised by Wise Women, called “Transition Towns Come to London”.  It took place in Conway Hall, and was, I realised when I got there, the first actual public talk I have ever given in London.  A few people have asked for the presentation I gave, you can download it here, but as usual with my presentations, it probably doesn’t make much sense without notes as to what I actually said.  Mike Grenville started the evening with a powerful overview of peak oil and peak water, and of the need to act.  Then I gave my talk about Transition, during which I read out a rather wonderful quote by Brian Eno about the power of visioning given to me by Lucy Neal of Transition Town Tooting just before the talk.  I think I’ll go on to use it regularly…  A few people asked me for it, so here it is…

“Humans are capable of a unique trick, creating realities by first imagining them, by experiencing them in their minds.  …As soon as we sense the possibility of a more desirable world, we begin behaving differently, as though that world is starting to come into existence, as though, in our mind’s eye, we are already there.  The dream becomes an invisible force which pulls us forward.  By this process it begins to come true.  The act of imagining somehow makes it real…  And what is possible in art becomes thinkable in life”.

Then everyone was invited to arrange themselves in the room based on which part of London they come from, organised around north, south, east and west.  Duncan and Suzy then moved around the room with microphones, listening in to what was already happening or which interesting new connections had been forged.

It was a fascinating evening, allowing a snapshot of who is doing what in Transition iniatitives across London.  While there are clearly issues of scale that apply in London but not in places like Lewes and Stroud, there are also tremendous opportunities offered by cities.  Earlier in the day I had met, with people from representatives of various London Transition groups and from local food organisations, Rosie Boycott, now the London Assembly’s ‘Food Czar’.  She is very enthusiastic, and we discussed many ways in which she could help Transition projects.  Everyone left with their heads buzzing.  The next day I visited Growing Communities in London, a wonderful project offering insight into the potential of urban agriculture, but I will write more about that next week. I headed home feeling that the seeds of something extraordinarily important and historic are sprouting in London.

Many thanks to Polly and all the Wise Women for organising such a wonderful event.

Sounds like a great event Rob, and I can’t wait to hear about your visit to Growing Communities.
Have you seen Food Up Front too (foodupfront.org)? They are doing some really interesting work in using gardening to strengthen local communities.

Just wondering if you (or any of your great readers) know of any organisations like Growing Communities or Food Up Front that are working in Manchester or the North West?

Keep up the good work!

BTW, you should check out SPIN farming too:
http://www.spinfarming.com/

It was a great evening. A comment by Rob gave me a moment of inspiration, when mentioning a car park in Totnes being acquired by local GP’s which will also encompass a ‘sustainable growing’ area.

In East Finchley, London a wonderful 2.2 acre site containing 4 large greenhouses, outside growing space and numerous useful outbuildings has been on the market for £3m+. It would have made a terrific eco-centre, but £3m doesn’t grow on trees – even nutty ones!

However I’d heard recently an application had been made to purchase the site for a polyclinic, and that is where Rob’s comments chimed with me.

I checked back with the planning application and found that it had just been granted. Being Metropolitan Open Land the permission was granted with the proviso that a ‘garden’ is installed.

I’m left trying to decide whether to just accept that the owners have probably never heard of sustainable communities, nor have any interest in them, and will just put down some turf and a few rose bushes or whether to try to find and engage with them.

Alternatively, I can focus on our last remaining piece of semi-open greenspace, most of which Barnet Council is trying to sell off for housing, but are prepared to countenace a community project on part of it.

My energy levels for fighting battles have somewhat depleted with the passing years but it is inspirational to see that energy in succeeding generations in people like Rob and Duncan and the Wise and WEN women – and last night Roberto Perez. Carry on dragging us ‘up the garden path’!

Something is sprouting indeed in London. Whilst Roberto Perez was inspirationally expounding on permaculture last night, across town, a roomful of people representing the London Neighbourhood of Climate Camp were gathered, planning events and strategies to bring more to take action on climate change and build a social movement, Typically, there are 30-40 people meeting WEEKLY!!! Astonishing!

Last weekend, loads of them had been in Manchester with 180 people from across the country to discuss where next for the ‘climate camp movement’. It was the loveliest weekend of the year and yet they travelled for hours and sat all weekend indoors to plan together. Dedication personified.

Reason for writing now is to say how much enthusiasm there is in Climate Camp for standing up for the positive, as well as taking direct action against what we don’t want to see built. That can get lost in the focus on Kingsnorth but is very much on the agenda.

Last night in the bar, we reflected how interesting it is to consider what we mean by Direct Action. Its become associated with meaning a scarf over your face and a wrench in your hand, stopping something. Its easy to forget it also means standing up proudly with a smile on your face a spade in your hand and starting a food growing project …or starting a TT!

I’m newly exploring Climate camp and am v impressed by what I’ve seen. Lots of synergy and opportunities for cross fertilisation with TTN. Would encourage anyone to make contact with their local ‘neighbourhood’ via climate camp website if they havent already. Not all as busy as London, but there is something across the country: http://www.climatecamp.org.uk

Hello there, Glad to hear about all this important transition work.