The Transition Movie Blog No.2. 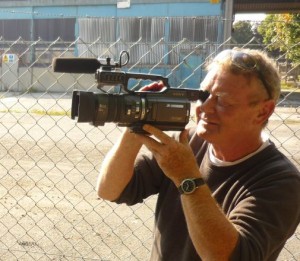 The documentary filming training course that was running next week has been cancelled due to insufficient response. We’re taking this as a good thing. It means you don’t need any training! Chris and I have spent this week poking around Transitionland for some exciting stories. We’ve found some real crackers. More on these next time. The place where transition was born, Kinsale, is going to feature in the film. Rob Carr from Cultivate has been doing some filming for a 10 part TV series in Ireland and he’s keen to help us out with our film.

Hopefully we can piggyback stuff they’re already doing! That’s what I call reduce, reuse, recycle…  Kinsale have some good foody stories as they’ve just filmed the 50 Mile Meal Award at a Gourmet Food Festival. They’re also going to film their brand new allotments in the making. So we’ve got the crucial food angle covered. Chris and I have already started filming around Totnes so watch out for us! Solar thermal challenge, nut tree project and more…

A few Graphic designers and Animators are keen to create us some top titles, idents and animations. There’s also some already out there on You Tube that we’re allowed to reuse and recycle. Not least the crucial 350 campaign. www.350.org Have a look and email your friends about it. It’s definitely in the zeitgeist because unbeknown to me Rob Hopkins just met the guy in charge at the Schumacher lectures in Bristol! I must have picked it up in the ether.

And finally, the coup of the week has been the music. The Bristol band Slow (see right), who are the musical voice of transition, have let us use their music for nothing! Have a listen to the track called ‘Seeds’ which is very apt for the Transition Movement. We may well use that for the end credits. If you have any other musical suggestions please let us know as we’re going to need a few more tracks.

My son filmed our apple cider-making party here in California. I haven’t seen what we caught yet, but it should be some good stuff.

Also, this weekend I should be meeting up with a film maker at Bioneers to talk about collaboration. And I’ll check with my compadres in the musician network for tune ideas.

The Irish Seed Savers Association has a good CD which might also be useful. http://www.irishseedsavers.ie/proddetails.php?proid=220&catid=31