« From the Transition Cities Workshop: Shilpa Shah’s Diversity Workshop
We Need Your Help: Seeking a Venue for the 2009 Transition Conference, and Some Designers »

I love my town.  Its not something we say a great deal in England.  In the US, people write songs about their towns and cities (Box Elder MO, Put Your Hands Up for Detroit, New York, New York…), as well as about the roads that join them together (Highway 61), but not here.  Other than bands like the Smiths, who sang songs about rented rooms in Whalley Range and other parts of Manchester, and one or two other bands (such as It’s Immaterial’s song about driving across England from the 80s), we don’t have a strong tradition of celebrating where we come from.  I noticed when I lived in Ireland that when two Irish people met, one would ask where the other came from, and pretty much regardless of where the person came from, they would say “ah, a beautiful place”.  Harder to do in England.  “You’re from Slough?  Oh”.   Anyway, last night saw my town at its best, and I want to write a few lines in praise of the place.

For the last few years, on the three Tuesday evenings in the run up to Christmas, Totnes holds its Christmas Festival, and the final one was last night.  What happens is that basically the High Street is closed to traffic (which feels so right that it is amazing more people don’t wonder why it isn’t done permanently) and filled with stalls, music, light, food, crafts, thousands of people, and all the shops stay open late. 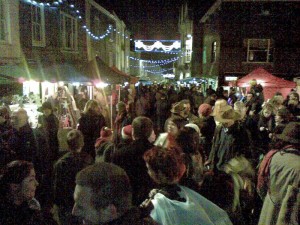 It is all done really well.  There are no tacky plastic snowmen, people walking around dressed as Santa or tinny Slade blaring out over loudspeakers.  Instead you will find local food, ordinary folks who have spent the previous couple of days making special chocolates in their own kitchens, making cakes and biscuits, mulled wine and chai, as well as local farms serving up their own meat in sausages and burgers.  There are people selling lovingly handmade soap, lotions and potions.

There are all kinds of buskers, schoolkids playing the violin, choirs, an amazing huge Samba band, Bert Miller and the Animal Folk playing outside the Animal Rescue shop, a few jazz crooners, and some drumming.  There is Thai food, Indian food, Chinese food, burgers, barbecues and all sorts of delicious edibles.  There are stalls selling locally made jewellery, local wood crafts, clothes, baskets and a whole range of other stuff.

The streets are packed with people, to the extent where it becomes hard to move around.  It is an amazing showing of the town at its best, beautifully lit, with music and food smells; the word most people had on their lips when I talked to them was ‘magical’.

It was an amazing contrast with the Woolworths on the High Street.  As anyone who has been following the news will know, Woolies are bust, and are closing after Christmas.  I popped in because it felt like an historic moment to see the demise of something that had been such a part of our lives for so long.  People swarming around looking for bargains, like vultures picking over the bones.  An amazing contrast with the vibrant, creative, local culture outside.

In which of the two does a town find its resilience, its ability to weather the economic ice age rapidly enveloping this country?  In the ability of people to work together to create a market place that runs the length of its pedestrianised High Street, small traders bringing homemade foodstuffs from their kitchens and farms and goods to sell and trade in a way that also encourages creativity, music and art?  Or in these ‘here today, gone tomorrow’ chains, with no local loyalty or connection?  In Woolies you hear no laughter, no music actually made by real people, no creativity, so smells other than floor cleaner, nothing that celebrates life.

On nights like this one gets a sense of what our towns and cities could be like.  In the oral history work I am doing one gets a sense of the diversity and richness of the markets, of the street traders, of the web of local food producers, bakers, fishmongers, butchers, creameries that flourished here until the supermarkets and chain stores moved in.   Of the noisy, untidy, colourful, human-scale nature of the street markets, before the idea of buying and selling thins became sanitised and regulated to a point where it lost touch with people and place.  Our towns didn’t just die, they were deliberately bumped off.  How we feed, clothe and amuse ourselves can be a cultural experience, about meeting and greeting each other, or it can be the cold, cynical and deadening experience that 10 minutes in Woolworths invariably is.

I do love this town.  This creative, eclectic, eccentric, frustrating, unique old place that has become home, is an amazing place to live.  A friend in town tells of her daughter going on a canoeing trip to Canada, and being in the middle of one of the Great Lakes in a kayak, seeing another boat and rowing over the say hello.  “Where you from?”, she was asked.  “Totnes” she replied.  “Oh, Transition Town Totnes!” they said.  Another friend, Andy Langford of Gaia University, born and bred in the town, told me that he attended a public meeting in the US where he got a round of applause just for saying he was from Totnes!  While the town doesn’t yet really deserve its reputation for being a cutting edge eco-town, on nights like last night, one can sense the potential, one TTT is doing its bit to try and draw out.

Not enough people write songs about their hometowns here.  I’m not a writer of songs.  I did write several many years ago, fairly dirgy affairs they were too.  I would hope though, as Transition Initiatives continue to embed themselves up and down the country, and lead to people reconnecting with place, that the creativity will pour forth.  I would certainly think that the inevitable and impending relocalisation of our towns and cities will give us more reasons to celebrate and enjoy where we live, more events like last night, more reasons to be creative and poetic rather than less.  Within the demise of Woolworths one can get a taste of the new world just waiting to be birthed.  May our Transitional acts of mass midwifery be fruitful.

NB. Apologies for the ropy photos, my camera is broken so these are taken on my phone.  Thanks and congratulations are also due to the Festival organising committee for pulling off another wonderful series of events.

I enjoyed the way my area of Poole was celebrated in song recently. See http://uk.youtube.com/watch?v=F8kfyDfU3IU (but please don’t look if you’re likely to be offended by strong language).

Harriet, that is quite wonderful! Thanks….

When I moved to Scotland, people would ask me ‘Where do you belong to?’ It seems like an interesting way of putting it. Certainly beats the question: ‘Where are you from?’ with it’s obvious answer, ‘My mother’.
Perhaps it’s not the place you left that matters so much as the place that claims you.

Anyone familiar with The Idler Book of Crap Towns? Much of the (very funny) cynicism of that book seems to be drawn from the fact that so many of our towns and cities have suffered from the ‘modernisation’ which has led to bad town planning, brutal and inhuman concrete and ring-road based architecture and identikit high streets and shopping malls full of the same corporate chain stores and ‘theme’ pubs, and the alienation this produces in the residents. As one contributor puts it; “Is there some conspiracy to homogenise the country (whole of the ‘western’ world) so that in the end we haven’t got a f**king clue where we are?”

One day we will look back at books like ‘Crap Towns’ and ask ourseves how we allowed ourselves to live like this.
http://idler.co.uk/category/crap-towns/

Can’t agree with your idea that there are no songs about our land. Try listening to ‘Show of Hands’. they are from South Devon – not a million miles from where you live. The UK definitely has a folk culture that celebrates where we live – but it just maybe a culture that you’ve never looked for.

The Wurzels! Glorious! (“I’m off to Barrow Gurney…” etc). Great in front of a live South Bristol crowd, singing along. (Don’t think I’d fancy the Pill ferry at night though…).

I agree with Graham. What gets me down about modern cities is that they are all much the same. Chain stores, mass motorization and “modernization” have rendered our towns and cities so similar and bland that they have lost their identity.

I felt a little sad seeing Woolworths go, but who knows, maybe Woolworth’s downfall is the first crack to appear in the British Clone Town world, and maybe it is the first tentative step towards a world of more human, pleasant and cultural towns and cities. 😀

I’d like to hope so peter, but at the moment the cracks are being filled with more of the same… Woolies niche in the system seesm to have been colonised by Poundland and the like…

Years ago we had many independant record shops in Southend, I even did a ‘record shop review’ in the fanzine I used to do back in the day – The Golden Disk and Downtown Records were good for your mainstream stuff and ‘rock’ records respectively, the latter staffed by heavy metal fans and aging rockers, the former by (quote) ‘girls who are very pretty but I expect they’ve all got boyfriends’. Record world on Southchurch Road was the first to stock punk records and was an outlet for all sorts of fanzines, the only place locally where one could pick up publications like ‘Sniffing Glue’, ‘ripped and Torn’ and other London based titles (and probably directly inspired me onto the self-publishing path I’ve followed ever since…), but Projection Records was my personal favourite as it not only kept up to date with everything post-punk and indie (when ‘indie’ actuall meant ‘independant’…), but was also a specialist in jazz records, opening my eyes up to all sorts of musicians and musical forms I might not otherwise have come accross, eg, Derek Bailey, John Coltrane, Keith jarrett, etc. the proprietor Barry Martin was a huge blues fan and always happy to support the local music scene even if it wasn’t his personal cup of tea – he once stood in on guitar for local punk band The Sinyx when the usual guitarist couldn’t make one of their gigs, and later joined R’n’B legends The Hamsters. Then there was Parrot Records,who had a manager who looked like Beethoven, smelled like a goat and was always outrageously rude to customers. Another local record shop proprietor, Guy Norris, even got an obit on the Southend Punks website when he recently died… then there was the little independant reggae shop in York Road market that always smelt of highly suspicious substances when one walked past…

Nowadays all we’ve got is Zavvi and HMV, and Zavvi will be gone in a few weeks…

Sadly that seems to be the case. I remember a line from Andrew Simm’s Tescopoly, comparing chain stores to invasive species, a very good analogy, I think. Still, you can only cement over the cracks for so long, but then it depends how long that “long” is.