« The Perils of an Economy Based on Bricks and Boutiques. Colin Hines speaks in Totnes.
Nine Tools for a Happier Society » 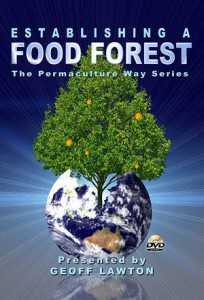 Geoff Lawton is a permaculturist’s permaculturist. As one of the first ‘wave’ of designers and teachers in Australia, he has been implementing and thinking about permaculture for many years, and has become internationally recognised as a repairer of landscapes, and a creator, even in the most unpromising ecosystems, of food forests and abundant, productive landscapes. For me as a permaculture teacher, he is one of the best role models there is.  He continually breaks new ground, not just in his work, but also in communicating these ideas. A short online film about his work in Jordan became a viral internet phenomenon a couple of years ago. This new film offers an inspiring and enlightening immersion in his work and thinking, and also a moving look at just how productive permaculture systems can be if they are sufficiently well thought out and designed.

This 80 minute-long film starts with a class in forest ecology, structure and pattern, with the first 20 minutes or so of the film being Geoff talking in front of a whiteboard to a permaculture course, explaining how forests are layered, and why we need to think of establishing forests in terms of time, looking, as nature does, at the creation of a forest being something that happens through a series of ‘waves’ of plants, with initial short-lived ground covering nitrogen fixers, supported by slightly longer living nitrogen fixing shrubs, making way, over time, for larger trees and then for the final overstorey, the productive trees, whether they be fruit, nut, timber, fibre or whatever.  While not especially visually edifying, it offers a clear and straightforward grounding that makes the rest of the film far clearer.

It is this conscious design, this mindful and conscious assembly of elements, that makes defines the permaculture approach, based as it is on the careful observation of nature and its patterns. The aim of Geoff’s food forest approach is the creation of systems which are productive and abundant yet which require very little maintenance. It is entirely possible to design and plant a forest which, within a relatively short period of time is productive and relatively self-maintaining (although writing this in England one can sometimes feel a bit despondent with hearing people in Australia say “look, here’s a food forest we planted 5 years ago, already reached canopy level, just look at all the fruit”. Here you’re lucky if the trees have even grown noticably).

Where this film really comes alive is the point when Geoff leaves the classroom and heads outdoors to introduce us to food forests at a range of stages. We see those just being started, as ground is sown with nitrogen fixing plants, to those that are several years old and starting to find their shape, and then to one planted 20 or so years ago which has become a dense forest of fruit and other yields. Geoff comes across in the film as someone who is deeply fired by the potential he has seen in this kind of approach, and its ability to offer us food, and a lot more besides.

Bill Mollison, the co-originator of permaculture, once famously said that “tidiness is maintained disorder”. For people wanting to see neat and tidy gardens with plants in neat rows, the kind of thing that organic gardening magazines are so fond of, this film may be challenging. The walk around Geoff’s vegetable garden, which he assures the viewer contains over 400 food plants, so many he has lost count, is, for the uneducated eye, a tour around a riotous jumble of all sorts of greenery. Alan Tichmarsh would throw his hands up in horror. Yet his careful explanation allows us to see deeper, to see the design underpinning it, to see the work that went in early on paper in order to allow this consciously designed system to flourish.

Although many of the plants he introduces us to are Australia-specific (the “chocolate pudding tree” sounds like something worth trying to breed for the UK climate) his design principles are universal. For anyone wanting to replicate his work here, your best place to start is with the excellent courses run by the Agroforestry Research Trust here in Devon.

Indeed, their model forest garden is probably the closest thing we have here to the kind of system Geoff is setting out in this film. This is an excellent film to show to Transition food groups, as it brims and bubbles with possibilities and vitality, and perhaps more powerfully, at the end of the film, as you stand with Geoff in a mature food forest, you get to feel what being surrounded by such landscapes could actually feel like, what a well designed perennial food system might feel like and sound like, as well as just intellectually understanding that they are possible

As we stare headlong into a future with less energy and more localised economies, and where the power to alter landscapes and soils granted to us by fossil fuels has started to wane, we will look for ways of producing food that build soils, feed people, protect soil, lock up carbon and increase our biodiversity. What Geoff sets out here is a journey into what that kind of system might look like, and I feel sure that you will like what you see.

You can order DVD copies of the film here, and below is the trailer for the film.

Very impressive! Thank you for sharing.

Fab thank you. And the “short online film about his work in Jordan” that you mention at the beginning is incredible too.

I also acquired a copy of this film earlier this week and heartily concur with Rob’s review. Definately a candidate for the Transition Westcliff film club!!

Is the DVD compatible with the PAL format (UK, Ireland and most of Europe)? The website says it is NTSC format but region free.

Plays fine on my DVD player. I’m in the UK

This is a great and inspirational film! Don’t miss the DVD extras: they show 30-, 300- and 3000-year-old food forests around the world. Very cool!

Hi Rob, I’d like to order the DVD, but on Geoff’s website it says that the international edition is good for North American DVD players–but will it play on UK ones? I’ve had problems with this before. Could you please find out how to order ones we can play here? Many thanks!

Plays fine for me too. And thanks Stephen, well spotted!

[…] Hopkins at Transition Culture posted a review of this instructional video from Geoff Lawton. Where this film really comes alive is the point […]

I’ve been interested in this DVD since it was announced. I think I just needed to read a couple of reviews to tip me over into buying it.

Geoff owes you a beer!

That is really inspiring. I may have to get this DVD!