An Update from Transition around the world

Last time I did this people seemed to really enjoy it, so here is a snapshot of news stories and Transition happenings from around the world over the past month or so, both successes and failures.  Transition Town Romsey launch a garden share scheme modelled on the one in Totnes, Transition Town Wivenhoe make good headway, but unfortunately, Malvern Council decide it is still too premature to endorse their local Transition initiative.  In Northern Ireland, Transition Omagh are starting to stir, and in the US, peak oil blogger ‘Peak Oil Hausfrau”, is wavering between feeling despondent and getting involved in Transition.

There is an interesting discussion about Transition in Kildare, Ireland, Transition Eudlo in Australia are getting excited about the publication of the Australia/New Zealand edition of Transition Handbook, there’s a German review of the Transition Handbook, and the River Journal takes a look at Transition Sandpoint (Idaho) in the context of other local climate change initiatives.  Up in Scotland, Transition Forres is struggling to find land for allotments, something also being pressed for by Transition Town High Wycombe, while Transition Keighley plan a hydro scheme on their local river and Transition City Lancaster venture out and do their first stall at an event. 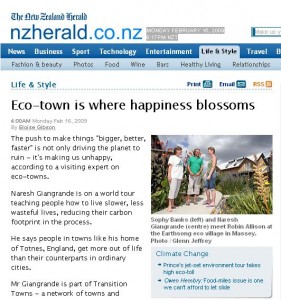 Transition West Kirby have been  busy planting trees.  In Canada, Transition Peterborough have been working with their local school, and Sophy and Naresh’s Transition Training tour has made the local papers (see right).  One of Scotland’s first Transition initiatives, Transition North Howe, is now unleashed! On an altogether odder theme, Transition Westcombe write beautifully about toast.

I’ve definitely decided to get involved in Transition! Our Steering Committee isn’t sure how the Transition Town concept will unfold in such a big place (500,000+ people in Oklahoma City), but we are dedicated to trying.

We now have our website up at http://www.goinglocalokc.com (although we’re not official yet – haven’t attended any trainings) and a new blog – Envision 2020 (http://envisionokc2020.blogspot.com/).

The Envision 2020 blog is our attempt to use the TT “visioning/backcasting” tool to picture a future with declining, expensive energy with a series of news articles from the years 2010 to 2025. Eventually, we may turn the blog to a collaboration to try to get the community more involved. I have to admit, it’s terribly fun to write.

Thanks for the mention!

Can I just clarify about ‘Malvern Council’ thinking it is premature to endorse our initiative. This was in fact the town council, relatively limited in what it can (or wants) to do in the town. Malvern Hills District Council, on the other hand, has been supportive so far, providing meeting space and other resources. The county council looks hopeful too.

This is a link to what is happening in Omagh

I see from the picture in the newspaper article that Sophy and Naresh are obviously pining for a bit of UK weather.

We’re saving some for their return in March…

Oklahoma folks! Dana from Transition Denver here….Denver is over half a million….we would be happy to share what’s working here in Denver….feel free to connect me via http://www.transitioncolorado.ning.com.

Round up of the week « Transition Town Farnham
20 Feb 1:14pm

[…] new ways of growing food can help create Food Forests and even green the desert – an update from Transition around the world, and – the Transition Conference […]