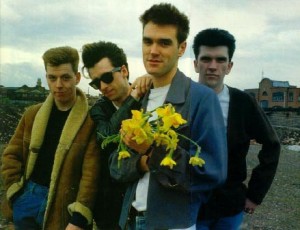 Been a bit of a break in the usual service, due to my computer dying. Should be rectified very soon. In the meantime, I gave a talk the other day to the “Environment, Economy and Culture Overview/Scrutiny committee” at Devon County Council, invited by them to explain what Transition is and what the Council might do in order to support it in Devon.  At the end of the meeting, they voted unanimously to investigate further and prepare a resolution on the subject.  Sitting at the back was Carl Munson, formerly of Traydio.com, now presenting on a radio programme in Exeter.  After the talk, we walked back through Exeter together, and following our walk and our chat, mostly about music, he penned the following blog post, in which he tries to weave in as many Smiths songtitles as possible.. how many can you spot?

Apologies if this observation has been made before, but Rob Hopkins is clearly the Clark Kent of the green movement. A mild-mannered permaculturist by day, Rob – in an instant – can become, (dare I say transition), into an eco-super-hero, gifted with an x-ray vision that sees through the twin challenges of peak oil and climate change, to a brighter future beyond.

I saw it with my own eyes this morning at County Hall in Exeter, where Rob was the guest of county councillors who wanted to get up to speed with the Transition movement. Not a hand in glove fit you might think if you believe – as I do – that Transition is really a ‘bottom-up’ phenomenon. What difference does it make, you might wonder, if some biccy-munching, tea-sipping councillors get to grips with resilience? Can they be the smiths of a positively-forged future? Heaven knows I’m miserable now, after my first visit to what seemed like an extremely pedestrian way to create change. But it all helps, thinks Rob, in a fair defence of the dead slow machinery of regional government.

Last night I dreamt of a positive post-peak-oil future, but what to do – in one’s waking hours – when it seems the world won’t listen? When the problems we face are screaming, at least to me, louder than bombs? Panic? No. It seems Rob’s mild-mannered, verging-on-diffident style is the way forward – he hit them with the stats and charmed their ears open. Thing is, he – and thousands of other grass-roots acivists around the world – have started something fired by their own passion and initiative. They don’t seem to need politicians, but the more the merrier I suppose, if they – the powers that be – can ‘get it’. Had it been left to me, it might have been a case of ‘bigmouth strikes again’ – the proverbial boy with the thorn in his side.

Centralised power, as far as I’m concerned is live a bee hive when the Queen is dead; lots of activity, but no real sense of leadership and true productivity. Getting these folks out of ‘job consciousness’ and into the spirit of true service, beyond partisan agendas and self-interest is like asking the shoplifters of the world to take part in a huge stolen goods amnesty. Can their consciences ever overcome their addiction to business-as-usual. Can egos be put to one side? It’s like asking the most macho Aussie to take a back seat, and let his ‘sheila’ take a bow.

If anyone can bring this about Rob, or should that be Clark can. Okay, that joke isn’t funny anymore, and on a more positive note, one councillor seemed to understand that the future will mean cultural change – in terms of diet, motorised mobility and more modest energy requirements. A change in diet, is not news who’ve long felt that meat is murder. Post-war meat consumption may seem backward and strange step, but if we’re to achieve food security, it has to be said: strange ways here we come.

Hard decisions will have to be made; priorities set. Pity the man who has a girlfriend in a coma. Surely his and her need must come before any ideas of my flying abroad? Thanks to Rob’s modesty and charm (a man who history may perhaps see as gifted as William Shakespeare, but as self-effacing as Shakespeare’s Sister), there really is a light at the end of the tunnel.

My message to Devon councillors and politicians everywhere: the time for action is now. But, how soon is now? I ask!  Will it be ‘hats off’ to the bureacrats? Or just another hatful of hollow? The worst of times to come? Or the very best of…?

Frankly, Mr Shankly, that post was truly awful. In fact I’ve re-read it and I’m still ill. I think I need to go back to the old house for a lie down now…

Get well soon Graham. Remember, I don’t owe you anything!

Well I wonder… 27? Have I got everything now?

Can someone reassure me please that this post was written ‘tongue-in-cheek’ and meant to be read as such?

‘Heaven knows I’m miserable now…? Smith’s song title? Can we have more quizzes like this on the blog please.

It made me oscillate wildly.

ROG – spot on!
Next week: Transition – the Boyzone remix (appealing to lovers of other genres and age-groups)

Yeah – but what difference does it make Carl?

I suppose Peak oil deniers don’t get to see this site, otherwise they’d have proclaimed ‘There is a Light That Never Goes Out’!

Did you mean ‘shake’, Klaus?

Hello all, sorry to intrude upon your thread by going off on a tangent… I am a student writing an essay about Transition and have put up a survey online for my research:

Please fill it in. Thanks!

This is what I meant, Paula: http://www.youtube.com/watch?v=gXLJElH_OR4

Sad. Deeply, deeply sad. You’re like a bunch of boys, pissing about around the back of the toolsheds, comparing Airfix kits. Idiotic.

Any chance of posting the notes of the speech you made to the council meeting Rob – I like the Smiths (I must do, I spent 40p buying their Greatest Hits on the last afternoon of Woolworths clear out sale) but am not sure a speech full of their lyrics will persuade our overview committee.