A Friendly Permaculture Critique of the Obamas’ Vegetable Garden 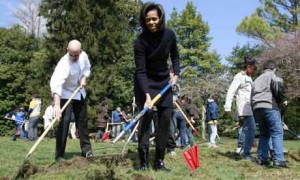 If I had written it as a Transition Tale in the Transition Handbook, it would have ranked as being even more ridiculous than the Beckhams’ cob retirement house.  However, here we are, and Michelle Obama has started to dig up part of the White House lawn and turn it into a vegetable garden.  According to the New York Times;

…whether there would be a White House garden had become more than a matter of landscaping. The question had taken on political and environmental symbolism, with the Obamas lobbied for months by advocates who believe that growing more food locally, and organically, can lead to more healthful eating and reduce reliance on huge industrial farms that use more oil for transportation and chemicals for fertilizer.

It is a fantastic development with enormous and potent symbolism.  According to the article, it will be used to grow 55 kinds of vegetable (go on, sit down with a piece of paper and a pen and try and think of 55 kinds of vegetable… I got to 25 and started to struggle…), the first time since Eleanor Roosevelt’s Victory Garden during World War Two. The plot will be 1,100 feet, just slightly larger than the average UK allotment, so while we are not talking a self-sufficient White House here, it is a powerful statement.  Here is a clip from the television about it…

However, I thought it might be useful to offer some constructive and supportive advice to the Obamas as they take their first steps into the world of gardening, from a permaculture design angle.  For this, I am indebted to the piece in the New York Times, and its map of their garden-to-be (see left).

First Tip. Put the garden nearer the house.  Bill Mollison, co-founder of permaculture, used to suggest growing your food “no further from the back door than you could throw the kitchen sink”.  Here in England, the traditional family vegetable garden was usually down at the end of the garden, ideally hidden away behind a low hedge, as though it were something to be slightly ashamed of.  The effort of trudging down to it was one of the reasons gardening died away as a mass pursuit sometime in the early 1960s.

Putting the vegetable garden up against the house, in aesthetically delightful raised beds on the south facing side of the house would make harvesting easier, would look great in the formal photos taken with visiting heads of state (“Vladimir, just a bit to the left so they can get the artichokes in”).  It would model to the nation that growing food, edible landscaping, is something to put centrally in our lives rather than tucking away out of sight of the house.

I blame Capability Brown and all those dreadful 18th century landscape artists, who popularised the idea that the view from the house is everything, that it should be sweeping and open, it should present the viewer with some idealised landscape, denuded of anything that is actually useful.  To be able to look out of the Oval Office window and onto an edible landscape would be very powerful.  Lose that lawn.

Second Tip. Add more fruit.  The design thus far is all vegetables and herbs, with rhubarb being the sole fruit.  When Bob Flowerdew visited Totnes and was asked how to get the people of the town growing food, he suggested by focusing on fruit rather than vegetables.  They are easier to grow, take less time and are more costly to buy than vegetables.  Some espaliered fruit trees, or perhaps an orchard… to return to the previous point, energy efficient layout would suggest that the vegetable garden go as close to the house as possible, the fruit can be further away.  Perhaps there is a route into and out of the White House that visiting dignitaries use, which would be planted with apple trees, grafted to form a tunnel?

Third Tip. Think holistically.  A vegetable garden is just one element of a sustainable lifestyle.  Why not put back the solar panels that Jimmy Carter put on the in 1970s which Ronald Reagan subsequently took off again?  If being off the grid is good enough for George Bush’s Texas ranch, surely it is time the White House stepped into the 21st century.  Insulate.  Draught proof.  Thicken those curtains.  Do an energy audit and work though its recommendations.  Visiting dignitaries being invited to use the compost toilet?  Now that would be a powerful message to the world!

Fourth Tip. Add more diversity.  Although the New York Times piece talks of 55 vegetable varieties, the map they publish shows 16 types of vegetable and 14 herbs.  While it is admirable that the focus, as a garden for a busy urban family, is on greens and salads, there could be a wider range of these.  Where’s the rocket, the mizuna, the mustard leaves, the amazing range of cut-and-come-again or pick-and-pluck salads?   As a model for the small family garden, salad mixes are an important element in making the most of small spaces.

Also, there are very few carrots, and those are tucked in with the herbs.  Why not grow them together with the onions (for their companion planting properties), and grow more of them?  Pulling carrots is deeply satisfying. Finally, potatoes.  Although in a small garden it is not worth growing lots of potatoes, as they can be bought so cheaply from local organic growers, for kids there is nothing like digging up your own potatoes and then eating them.

Geoff Lawton is fond of saying that all the problems of the world can be solved in a garden.  Here is an amazing opportunity to prove that he is right.  It should also provide a great education for the nation, including the newsreader in the clip above who says “we have flowers along the side of it that I’m sure aren’t edible, nasturtiums, marigolds….” (both of which are, of course, edible flowers)… Eleanor Roosevelt’s Victory Garden led to millions across the country, producing 40% of the nation’s food, hopefully we are about to see something similar again.  Over to you now Gordon Brown.  Edible hanging baskets at Number 10?

Do you have any tips for the Obamas as they start life as gardeners?  What would you do with the space they have?  Clearly, Michelle Obama isn’t yet especially practical when it comes to gardening, so what would your advice be for a family starting from scratch?  Send us your tips.  The Obamas almost certainly read Transition Culture every morning, so your tips may well end up being implemented at the White House…. you never know.

P.S. Congratulations to those who ran the campaign to make this garden happen….. fantastic….

[…] A Friendly Permacultre Critique of the Obama Garden and I’m with Stupid From Transition Culture. […]

Sorry to be so tardy in following up on this, but I wonder if you have more information on solar panels on the White House? I am aware that the Park Service has installed both PV and solar hot water on several outbuildings on the grounds, but have not been able to confirm actual installation on the White House itself.

I know nothing you can’t find by Googling–which as you say, means the Bush solar panels are at the White House, not on the West Wing. 🙂 Give Bush credit for his geothermal heat pumps at his ranch and passive solar design (see Wikipedia http://en.wikipedia.org/wiki/Prairie_Chapel_Ranch)

To nitpick–the Park Service installed Carters solar panels just as it did Bush’s, it owns the place.

[…] One lady who has time on her hands with at least four years to grow lots of different varieties is Michelle Obama in the White House garden. […]

[…] Through it all, there’s been barely a weed to pull. Yep, I’m still preaching the gospel of permaculture. I found this article a while back and recommend it to those of you are ready to start your own gardens: A Friendly Permaculture Critique of the Obamas’ Vegetable Garden […]