« Transition Network conference 2009 Film and Writeups
Insights on Resilience from the Recent History of Totnes. 1: Back garden food production »

5 Amazing Things You Never Knew About Potatoes! *plus* Your Chance to Win a Potato! 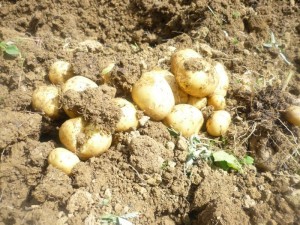 Just been digging up my new potatoes with my kids, very enjoyable.  I didn’t grow that many, and it wasn’t the most prolific year’s harvest I ever grew… all I can say is thank heavens we aren’t relying on this year’s crop to last us through until this time next year!  I don’t tend to grow many potatoes, as there are good local organic growers who grow them better, cheaper and have more space to do so than I have.  I do like to grow a few though, as there are few things nicer than digging up your own potatoes on a fine early July afternoon. 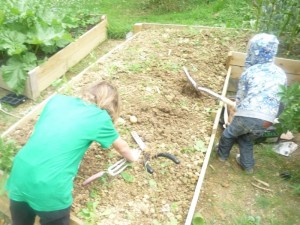 This year I grew them as a way of helping to break up a new bed I made over the winter, a raised bed with terrible clayey soil that I hoped would become more workable via the spuds (jury’s still out on the effectiveness of that one).  Amazing things potatoes.  So, in honour of my somewhat meagre but nevertheless terribly invigorating (and, it must be said, rather delicious) harvest, I though I would present you with five amazing facts about potatoes, one of which is entirely untrue, as we haven’t had a competition at Transition Culture for a while.  You’ll enjoy this, should get you brain working hard on a Monday morning (make a nice change from the usual drivel I post here then…)

So, one of the following facts is nonsense.  Which one?

The first correct answer pulled out of my hat on Friday will win…… one of my potatoes!  Can’t say fairer than that.  Don’t post answers as comments… send them by email only please to rob (at) transitionculture.org by 10am this Friday.  Possibly the most fiendishly difficult competition we have ever run at Transition Culture with almost certainly the least thrilling prize, but I’m sure you will rise to the challenge….

Rob, if you want to improve your soil, try Jersualem artichokes. They break up the soil, crowd out the weeds and the massive top growth is excellent on the compost heap. If you want to avoid blight, you could also try growing oca oxalis tuberosum.

However you will also be growing nothing but Jerusalem artichokes in that bed for the forseeable future! And they taste disgusting…

Jerusalem artichokes are quite invasive but if they taste disgusting is a question of the right way to prepare them! I agree that they ae great for producing loads of mulch material! Early potatoes usually have less problems with disease that late potatoes.

Kids love Jerusalem artichokes because they are the most potent fart-fodder known to man.

A staple for “le petomane” in France around the turn of the 19th century, they will test the stitching of all but industrial strength nether garments.

…also, Jerusalem artichokes don’t totally crowd out the weeds, at least not on the “terrible clayey soil” I have too. Lots of thistles raise their ugly heads in between. Potatoes fertilized with chicken manure and a thick mulch cover of straw worked fine for me, left the soil in that loamy condition you’re looking for.

BTW, it was not the Aztecs who measured time like this, they would have used a tomato or some jalapeno pepper…

5 Amazing Things You Never Knew About Potatoes! *plus* Your Chance … « Best Hair Salons
7 Jul 12:24am

[…] nobody@flickr.com (Moyen Format) wrote an interesting post today onHere’s a quick excerptMarie Antoinette thought they were pretty and tucked one into her hair; Bob Dylan’s song ‘Blowing in the Wind’ was initially about the disease potato blight, the spores of which are spread by the wind. Dylan was a keen urban gardener, … […]

the very best way to improve your soil with the least manual labor is simply the “lasagna gardening” method so simple!simply layer compost type material interspersed with cardboard,newspaperorganic fertilizer amendments such as greensand,cottonseed meal,fish bonemeal,worm castings,etc.cover with plastic in summer for quicker results.worms will proliferate and soon you will have crumbly dark dirt without the backbreaking digging.good luck!

Begging to differ … I think Jerusalem Artichokes are DELICIOUS raw, also mashed. Rumored to be wonderful for helping to stabilize blood sugar on account of their inulin content. My chickens LOVE pecking around under them, though I never have figured out what they find there that isn’t also elsewhere.