Insights on Resilience from the Recent History of Totnes. 2: The Market Gardens

Totnes featured 3 commercial market gardens within the town itself, Heaths, Gills and Phillips/Victoria Nursery. The largest, at least initially, was Heath’s, started in 1920 by George Heath senior (see left), and then run by his son, also called George, until its closure in 1981. Much of the south-facing area of the town has been dedicated to food production back through history, and the gardens serve as a powerful reminder of the potential of urban market gardening.

The expense of imported food, until the EU Common Agricultural Policy began to lead to cheap subsidised imports, meant that diets were much more seasonal and the lower population meant that these market gardens generated a high proportion of the town’s food. AL’s memory of Heath and Gills’ shops were that the produce was mainly seasonal, “brussel sprouts at one time of year, runner beans at another, and cabbages seemed to be all year round”.

Heath’s Nursery was in two sections, there was the open area, which grew mainly vegetables and had one small propagating house, now “Heath’s Nursery car park”, and the lower area, now also a car park known, just as “The Nursery”, which was covered in greenhouses. He grew a wide range of vegetables and salad crops in season. To support the florist side of the business he also specialised in chrysanthemums, dahlias and pot plants. Dahlias were more fashionable at the time and were lavished on the decorated van which was a big feature of Totnes Carnival in the summer. The greenhouses were heated and allowed the production of large quantities of tomatoes (a speciality), lettuces and chrysanthemums out of season. A large sack of congealed pigs blood suspended in the central water tank for watering the tomatoes gave a pink hue to the water and gave the tomatoes the edge in flavour over the competition.

For more exotic flowers on special occasions such as weddings, these were ordered over the phone direct from Covent Garden. These came down overnight on the train from Paddington and David Heath remembers regularly going in their van to pick up the boxes from the station and at the time seeing all the boxes of day-old chicks also awaiting collection. The garden’s fertility came mainly from manure brought up from Harris’ Bacon factory. The outlet for Heath’s produce was his shop on the Butterwalk (now Harlequin Bookshop), which was frequently beautifully decorated for special occasions, such as the 1977 Silver Jubilee.

Although Heath’s nursery was a large area situated almost in the middle of the town, there were those who lived in close proximity to it but who never ventured in. Given the town’s Elizabethan layout and narrow roads, which survived the war mostly intact, access to the gardens was very poor. VH, whose father grew a lot of the family’s food himself, recalls that she had little to do with the nurseries, “firstly because we rarely had any need of their produce, and secondly because it was all walled in and locked”. There were those who visited the gardens behind the walls though, MV remembers that when her own vegetable plot was no longer able to provide a particular vegetable, she’d go down to Heaths. “You could tell him what you wanted and he would go and pick a few of them for you”. IS remembers rarely seeing George Heath, as he was usually working in the gardens, apart from Friday afternoons and Saturdays, when he would come out and spend time in his shop.

AL recalls going to Heath’s shop on Saturday mornings with his father, Eric, who was a teacher at the Redworths Secondary Modern School. “My dad and he were both in the amateur operatic society and would be singing in the same Gilbert and Sullivan show, so they would sing little bits to each other, and then him saying “oh no, tomatoes, we got no tomatoes, but let’s go get some then”… and then we all went over. That’s what we did. We all went over to the greenhouses at the nursery and picked tomatoes, and they sang songs to each other wandering up and down and talked about this and that”.

DM, farming out at Staverton, remembers recalls George Heath’s business style. “He had a miserable manner. If you took anything to him to see (I used to take Bramley apples), he would plead poverty. “I can’t pay you what I paid you last week Mr. M, business is very bad”. I used to say “George, you’re talking rubbish!” He was a very good businessman and he did nobody any harm. He was very go-ahead and he worked hard”.

As has been mentioned above, access to Heath’s Nursery was difficult due to it being completely walled in. One could either access the garden by a small door in the wall in South Street or through a passageway in from Leechwell Street at the top end of the garden. A small van could get in through a small double door in Leechwell Lane after going round the tight right angled bend and making a very skilled manoeuver (even today it is quite a feat!).

A small road in from South Street was opened up in the early fifties and is now used for pedestrian access to the Heath’s Nursery car park. This allowed access for lorries to get in to deliver manure and general supplies, as well as bringing more customers in. Heath toyed with taking advantage of the new access. His son David told me “once the site was opened up, more people came in to get plants and so on. It could have been a garden centre, but by the time it was opened up he was nearing retirement, and didn’t want to”.

When it came time for George Heath to retire he did consider selling the site for building development but there was a sewage embargo on the town at the time and the access from South Street was not acceptable in any planning application. The land was sold to the South Hams Council and it was only after this that the Southern bypass road was opened up and the car parks put in as they are today. The closure of the nurseries took place in 1981 ending with the dismantling of the greenhouses. George Heath passed away in 1985.

Gills Nursery adjoined Heath’s, and was similar but smaller. Their shop (now Sacks Wholefoods) backed onto the nursery site which, when taken over by his grandmother in 1932, featured just one greenhouse. The shop was run by ‘Granny Gill’ and her daughter in law, selling produce grown by the family topped up with produce from local farmers. Ken Gill recalls “there was a farmer on the Paignton road who was a big sprout grower, he supplied us in the winter, and our cauliflowers came from a grower near Kingsbridge. We couldn’t grow sufficient variety to be self-sufficient”.

The nursery was run by Jack Gill until 1973, when his son Ken took over, who managed it until the nursery closed in 1981. Running a series of glasshouses which were kept warm all year round required a lot of energy. Initially they were heated using coke, which required 10 tons a year, but they later moved to the less labour intensive oil, necessitating the burning of 2000 gallons of oil a year in order to generate sufficient warmth.

The site behind the shop was not the only site Gills managed. They also had a site on Harpers’ Hill, where they grew potatoes and sprouts, and one on North Street, where, Ken recalls, “we grew raspberries, in spite of it being north-facing, somehow it was warm enough for raspberries”. Later they also acquired a 3½ acre site beside the bypass, which was used for field scale vegetable production. The main nursery was kept fertilised with manure from their own pigs topped up with manure from a local farmer. “We had no complaints with our fertility”, he told me, “one year we grew 20,000 lettuces”, an extraordinary output from a small piece of ground.

Although running a business like Gills was hard work, it was a good living. Unlike Heath’s, the closure of which was forced by retirement, Gill’s was driven to close by a less predictable challenge. “A Highways engineer from Devon County Council came into one of the greenhouses one day, and told me and my father “you won’t be picking many more tomatoes here, we’re going to build a road through the place”. 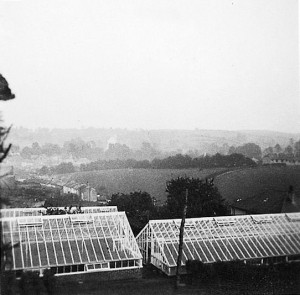 Although the proposed road linking South Street and the newly built Heath’s Way was never built (part of the road building phase which saw Heath’s Nursery opened up), it created enough uncertainty, hanging in the air as a possibility for at least 10 years, that when Jack Gill died, it fell to his son, Ken, to decide whether or not to invest in modernising and expanding the Nursery. Given the degree of uncertainty, he decided it would be unwise, and the nursery was slowly wound down.

The third garden, Victoria Nursery, run by the Philips family and about which less is known, supplied a shop at the bottom of Fore Street which is now Michelmore Hughes Estate Agents, and closed before the other two, and has since been developed for housing, as St. Catherine’s Mews. I have as yet been unable to find anyone who remembers much about this garden.

[…] here to read the rest: Insights on Resilience from the Recent History of Totnes. 2: The … Connect and […]