« Insights on Resilience from the Recent History of Totnes. 2: The Market Gardens
Coming Soon: ‘Local Food’, a Transition guide, and an interview with the author »

Insights on Resilience from the Recent History of Totnes. 3:Local Farmers and the Town’s Markets

The farmers who surrounded Totnes were much more directly engaged with the town than they are now, as the town provided the key markets for their produce. DM farmed 250 acres (which had grown to 300 by the time of his retirement in 1989). When he started work on the farm, it was still run by working horses. The farm had around 30 cows, 40 acres of cereals and about 50 breeding ewes, but by the time he had retired, it had been turned into a purely dairy farm, with nearly 80 cows.

In the 30s and 40s, Totnes was an important outlet for the farm’s produce. D’s wife’s grandmother and mother used to make butter by hand, which they made under contract, either to shops in Totnes or in Brixham. The trips to Totnes, initially in a horse and trap, to deliver the butter, were also an opportunity to shop.

He recalls the post-war push to increase productivity, driven, at least in part, by the Agricultural Committees of which he was a member. One of the other key drivers in agricultural innovation was Dartington, which started the first artificial insemination centre in 1944, one of the first in the country, and also hosted the Agricultural Discussion Society, which brought many leading agriculturalists to the area to give talks on new developments and innovations.

This led to many new developments, the move away from South Devon cattle towards Holstein Fresians, and from hand milking to milking parlours, among other things. His neighbour and friend, John Watson of Riverford Farm, recalls the enthusiasm with which he embraced mechanisation and chemical farming. He remembers the steady stream of agricultural chemical salesmen beating their way to the farm.

The town’s Cattle Market meant the driving of animals into the town from the surrounding countryside. MF, who in August 1950 moved into the house her husband built on Barracks Hill, recalls needing to put a gate across their driveway in order to keep out the cattle who were driven into town by what was, at that time (before the town’s bypass was built) the main way to bring them to Totnes from Dartington.

Her son, AF, recalls picking up lots of casual work on local farms from the age of 13 onwards. He told me that in the late 1960s there were “lots of small family farms all over the place. The average farm size would have been 30-40 acres, 120 acres would have been considered quite upper class sort of farming”. Many of the farms were short of labour during the summer, especially during hay making and straw baling times. His favourite was one at East Allington. “We were out there a lot. We used to go out there and the farm was pretty much run by the young people.

Andy Strutt was a classmate of mine. He had 6 sisters, which was part of the attraction. Suddenly I found myself in charge of a little tractor moving around the farm picking up haybales with all these young women about and these big lunches and suppers where you could eat as many roast potatoes as you could get in yourself, that was very lovely. We basically ran the place. The children from Andy, 16, down to the rest of us, would man the potato harvester. That’s what we did. We’d go out there for the weekend and harvest however many tons of potatoes needed picking, take them, riddle them, sort them into this size and that size, then get in the Land Rover and deliver them to the chip shop in Kingsbridge. It was great”. 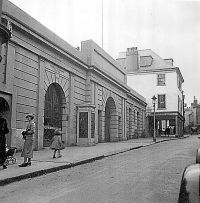 For most farmers, the two markets in the town were absolutely essential to their economic survival. Totnes had two markets, the Cattle Market, held initially at the Lamb every other Tuesday, before later transferring for a short period to Totnes Racecourse (now the Industrial Estate), and the Friday Pannier Market, held in what is now the Civic Square but which was, until it was destroyed by fire in the 1950s, a traditional covered market with stalls, the front of which came right out to the High Street (see left). DM recalls the Pannier Market as being “all covered, with old stalls with top and bottom doors, and a separate bit in the middle. Anyone could sell anything, rabbits (this was pre- days) and so on”. For VP, the weekly Pannier Market was as much about meeting friends as it was about shopping. “You’d meet your friends from out of town there”, she told me, “main things I remember buying there were sweets and butter”. 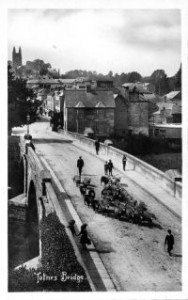 The Cattle Market was a key element of the local economy. Not everyone recalls it favourably. AL told me “on Tuesday, the town became what you would imagine the Somme to be. It was muddy, dirty, dungy, smelly, drunken, bloody and crowded”. On market days the pubs closest to the market, the Kingsbridge, the Bayhorse, the Plymouth and the Bull Inn were open all day. For AF, a young teenager at the time, market day was the day when, as an underage drinker, one could get served in the pubs.

KG recalls how the Cattle Market was what brought farmers and their wives into the town, while the husbands traded, haggled and drank, the wives would go shopping, providing a vital boost for the town’s economy. Although it created a certain degree of nuisance and put a huge strain on the town’s traffic infrastructure, the Cattle Market’s passing was, for some, a loss. KG told me “once you took away the Market it wasn’t the same”.

I am so very much enjoying reading these histories of Totnes. They bring back memories of my own childhood, a little later than this holding onto the pram, which was enormous, and walking to the market in Doncaster with my Mum and sister. Obviously things didn’t change very fast because just like VP above, the main things I remember buying were sweets and cheese! That and sitting in the cafe while Mum had a cup of tea with her mates. Then sometimes we would go onto the Co-op and did I get green shield stamps to stick in a book or am I getting confused? Someone a little older might have to help here…..

Insights on Resilience from the Recent History of Totnes. 3:Local ... | Museum And Art
10 Jul 5:55pm

[…] here: Insights on Resilience from the Recent History of Totnes. 3:Local … Connect and […]