« Coming Soon: ‘Local Food’, a Transition guide, and an interview with the author
The Potential Hazards of the Deregulation of Local Pig Swill »

Insights on Resilience from the Recent History of Totnes. 4: Shopping

Clearly the markets weren’t the only source of food. The High Street contained a far higher proportion of shops selling food than today. The way the shops were run was very different to today. ML describes a trip to the shops in the early 1950s;

“I used to go to the grocers and I could sit down, lovely. They’d go through your list and say, “yes, yes, we’ve some new whatever it is, would you like to taste some?” You’d have a little snippet of cheese or something, “great, yes, we’ll have that”. “Now we’ve got a tin of broken biscuits, but they’re not too bad (half price you see), would you like them?” As soon as you put a biscuit in your mouth it’s broken isn’t it! Then they’d say “now Mrs. L, you’re going to the butchers, yes, yes, and going to get some fish? Yes, yes, and paraffin? Yes, yes… and they used to say to me now bring any parcels in, we’ll put it in the box with your groceries and bring the lot up for you. And they did. They’d come and deliver and you’d go through it and say that’s fine and would you like a cup of tea….”

As well as the home deliveries offered by the shops, other traders, such as butchers, the creameries and local farmers, also offered home delivery services (not an idea new to Tescos!). MA recalls one of the traders who supplied her family’s bed and breakfast business. “I can remember when a lady used to come and sit at the table and say “and what would you like this week Mrs. Taylor? She would write down the order, Mum would check her cupboards and it would be delivered and paid for”. VH recalls deliveries of bread from Tarrings Bakery, and that Mrs Sollar’s grocery and Nott’s Dairy (run from the same shop) also did deliveries in the town.

For those living in settlements outside the town, such as MV who was living in South Brent, the home deliveries were vital. Her milk was delivered by a local farmer, cream was collected on Sundays on the way to church, and the local shop provided whatever else she couldn’t produce herself.

Reflecting on the changes seen in the local economy, KG is unsure change has necessarily been for the better. He told me;

“it has been progress of a sort, or has it? I’m not sure. We lost something we will never be able to regain. The loss of a lot of small shops has been hard, although we have replaced them with what we might call ‘slightly unusual shops’… We’ve lost the dairies, the independent grocers, although we have retained a good selection of butchers and some good cheese and fish shops. When you consider what we used to have….”

The supermarket age began at the end of the period we have been exploring here, on May 28th 1968, with the opening of Gateway, in what is now the chemist besides the Market Square. Nowadays the opening of a new supermarket in the town would be front page news, but AL, then a reporter for the Totnes Times, says that it “didn’t even register” for him, and was only reported in the Totnes Times on page 5.

Prior to the Gateway supermarket, the town had proto-supermarkets like Liptons and ‘Dickie’s Discount Store’, and at 58a. High Street there was International Stores, which had begun in the mid-30s as a standard grocers, but as the opening of Gateway approached, tried to make itself more supermarket-like. AL recalls it as “a shambles with one supermarket-type till near the door. I would not call this a dedicated supermarket though. More of a shop that was trying to move with the times”. There was also a very popular Co-operative Store, which VP remembers her mother loyally sticking with, in spite of the opening of the Gateway supermarket.

MV is dismissive of the idea that the arrival of the supermarket era was to the benefit of the town. When I asked her why she thought the supermarkets caught on, her reply identified another important social trend that was well underway by the early 1960s. “There were more women working by then, gradually almost every woman was working, except perhaps for some of the older ones. So it was more convenient. I hate the word ‘convenient’, but it was more convenient, to buy everything all wrapped up in plastic from one place”. 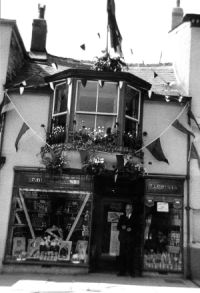 MA remembers the shops until the mid-60s as being very different from today. “Everyone seemed to buy everything in the town, they didn’t go anywhere to buy it”. The idea, which began to emerge in the late 1960s, that shopping meant driving to another town, would have been baffling in the 40s and 50s. It is interesting also to get a sense of the extent to which the town’s shops reflected its position at the heart of a rural community, much more than it does at the moment, and how it was more of a working rural town than at present. AV recalls the High Street of his childhood.

“All of the little back streets had some kinds of artisans or builders yards or something going on in them. You didn’t have to go very far out of the High Street before you were in light industrial premises. All of the top of town, like Harris’s ironmongers, they had their big ironmongery shop, but on the other side they had, where Greenfibres is now, an agricultural machinery shop. Can you believe it?! There was agricultural machinery sitting there which was for sale! They sold harrows and seed drills and things to go on the back of tractors! They had a little showroom of all that sort of stuff. Then they had the blacksmiths forge just round the back there”.

[…] here: Insights on Resilience from the Recent History of Totnes. 4 … Connect and […]

I know this is really revealing my age, but this excellent reflection on how things used to be in Totnes reminds me of my childhood in Kansas City, KS. Brings back lots of warm memories. Fresh milk with the cream on top was delivered to our front door every few days by the milkman in glass bottles with little round lids. He carried the milk to our door in a little metal basket, for lack of another word, and placed it on the doorstep. We’d put out the empty milk bottles for him to pick up with a little stick think inside that told him what we wanted next time.
The Manor man also came a few times a week (in his truck, though my grandmother remembered when he came in a horse-drawn carriage). He brought our order for bread, cheese, butter, cream, and such. (My grandmother always ordered salt rising bread. Yum.) Each time he came we’d give him an order form-like thing to tell him what we wanted for the next time.
Our produce, meats, and delicious, delicious fresh baked cookies (sand cookies and bears claws) was delivered by Wolferman’s grocery. Mother would call in her order each week.
Well, I hope you enjoyed this article as much as I. Our transition initiatve is in a rather remote area so I forwarded this to our list, noting that the services described here were considered especially important to outlying towns.
So, is it back to the future?
Sarah

A bit late, but for what it’s worth – I grew up in rural western Devon in the 60s/70s and remember the grocer delivering, and the fish van that used to deliver fresh fish to our inland village twice a week. Not to mention the churns that sat outside gates up & down the road for the milkman to collect; the milk in those was thick & golden & delicious, not like the blueish stuff that was delivered in bottles.

Where I live now, nearly a hundred miles away but only in the next county, there’s a model village showing how the town looked in the 1950s. The streets were packed with little shops; there was a huge range of food & clothing shops, all selling locally-produced goods, as well as ironmongers, stationers, newsagents & tobacconists, each one of them providing an income for a local family & jobs for local workers & producers. What do we have now? Mostly chain stores & a supermarket; one or two excellent one-off shops, but mostly the business rent & rates are so high that local people can only dream of starting up a new shop. The railway went, so we have to travel into the nearest city, or even further afield, for many things like art supplies. And high bus fares mean that if more than one member of the family is travelling, it’s cheaper to take the car…

Why do we continue to think we’ve “progressed” since then?!