« Needed: Volunteer Transcriber(s) for ‘In Transition’
Why We Don’t Need Formal Agreements for National Transition Hubs »

‘In Transition’ Premieres Around the World 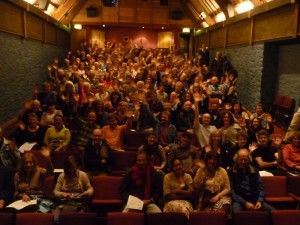 On Wednesday night, ‘In Transition: from oil dependency to local resilience’ was shown for the first time in communities around the world.  I was at the screening at the almost-full Barn Cinema in Dartington, where I introduced the film along with producer Emma Goude.  We asked the audience to wave for a photo (see left).  The film was also being shown in 8 cinemas in New Zealand, as was reported in the Timaru Herald.  There were at least another 20 places in the UK that we know of where the film was shown.  Were you at a screening, or did you organise one?  Do tell us your stories of your first screening.  Over September and October we are hoping to get as many public screenings of the film held as possible.  For details on organising one, see here.

Showed In Transition The Movie the other night, and it was great. Had a reasonable turnout considering it is a very hectic time for people getting back to school etc, a bad veiwing time, 6pm – 8pm so that we could avail of a free library, and not a great job on publicity as not in swing after summer.
But… had some new faces and It was really helpful, giving people a real over view of what Transition is all about, and the myriad ways in which it has been taken up by different communities.Someone said after that it really helped them join up all of the dots. Another thing that was especially helpful too was to see that there other people doing the same things all around the world, and it was fantasticfor them to realize that it wasn’t just something that me and Marella have been battering on about, and felt very good to be connected to the rest of the world and be part of this very positive and creative community !
Big Thank you to all those who made and contributed. Valerie Whitworth Omagh N I

We were delighted that our copy of the DVD arrived here in Guelph, Canada well in time for our screening Wednesday evening (thank you, Helen!). We had a full house — not a large venue, but it was standing room only and we scheduled a second viewing. Many of our members and also new folks came out, including several from other places in the region who are interested in bringing the Transition model to their communities. From the comments, people loved the film! They were inspired and enthusiastic about moving forward with actions this fall/winter season. We received several requests to show it for other local groups. Thank you so much to everyone who worked on the movie and helped inform and connect us all over the world.

We had a showing in Luton. In my excitement I forgot to count how many people were there, but we had to put extra seats in at the back, so there must have been over forty or so.

We were in a little underground lounge in an old Luton hat factory, and it felt like a very appropriate place to begin.

Reactions were very positive, and it created just the buzz we were hoping for from our first event.

Transition Horsham in West Sussex showed the film to an appreciative audience of around 50 people that included several other local groups with stalls around the room.