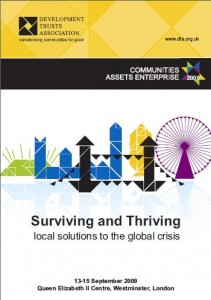 Was in London yesterday for the conference of the Development Trust Association (conference programme here), a fantastic event. I was speaking in the first plenary session, but due to overall time overrun, I had to give a 20 minute talk in 10 minutes! A bit hectic but seemed to go down alright. Highlight for me though was a workshop I attended following my talk. It was chosen from a mouth-watering smorgasbord of great workshops (community food production and distribution, community sector trading, community land trusts, community energy initiatives, setting up community development trusts.. imagine… I felt like a child in a sweetshop…), and was called “Community Bonds and Shares”. It was brilliant, very thought provoking.

I often say in talks that one of the most vital things we need to do is to put in place models by which people can invest into their communities, ESCOs being one such, but the question of how communities invest inwardly in order to enable relocalisation to happen is a key one. There are, within the DTA, people who have been doing this for years, and there is generally no point reinventing wheels. It was opportune therefore to be able to go to a workshop on this very topic. I wasn’t able to stay for the whole thing (one of the downsides of cheaper rail tickets is that their times are fixed), but here are some notes from what I did stay for. 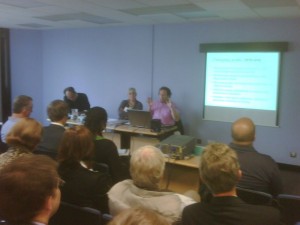 In the UK at the moment, only about 20% of people own any shares, and other than 4% of people who actively buy shares, most people only have them from the privatisations of the large nationalised industries. Most people are savers, not investors. This needs to change, Jim said. We are entering the time now where the Welfare State and pensions are over. Period. The last great upsurge of these kind of community investment models was in the late 19th century, when there was no welfare state. Most people are happy to donate to a good cause, but would think twice about investing in it. Why is this? Most people can actually afford to invest more than they can afford to donate. What we need is a shift from purely philanthropic giving to community investment models. Investors, rather than donors, make good customers, volunteers and active members of society.

However, it needs a big shift in public attitude. The model dates back to the 19th century. Recently they have started emerging with great vigour, because people no longer trust banks and they don’t trust Government. One example he cited was the Preston Industrial and Co-operative Society, from the time with no welfare state. At that time many people still suffered exploitation from employers who paid in their own currency that could only be spent in their shops… through the Co-ops, businesses were started, bakeries, shops, raising the equivalent, in todays money, of around £25 million. They peaked around 1900 and then declined as multiple retailers came to dominate the retail sector.

Is this move a good thing? I don’t know, Jim said, but this is a change that is happening, and we have to get to grips with equity and issues around community ownership, and develop appropriate models. He talked about research he had been involved with recently which found 84 cases of enterprises run in this way, with over £10,000 of community investment. Over the last 10 years, there have been 41 new ones set up, raising over £45 million, with around 63,400 members. Many of these are renewable energy schemes, such as Westmill, which raised over £4 million.

Most of these are set up as Industrial and Provident Societies, which, for Jim, is still the best model due to its unique features. It allows investments that can offer interest, although we need to be very careful and clear about how we offer investments. He distinguished between bonds (a promise to repay the capital at some point, i.e. a debt) and shares, which are ‘at risk’ and are capital that can be lost, but which is seen as equity. It allows a sense of ownership and risk sharing. 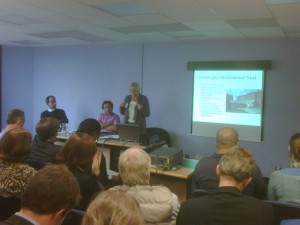 The second speaker was Helen Seymour, of the Headingly (in Leeds) Development Trust. Her talk looked at the case study of what has been done there. The area of Leeds has a large student population which has its own challenges, but it also has lots of good things going for it. The Headingly Development Trust (HDT) was set up in 2005, and now has over 820 members with a minimum shareholding of £5. Members have to give 6 months notice in order to take money out.

As well as the main Trust, they have also raised share capital for two distinct time-based campaigns. The first was for an enterprise and arts centre, which raised £105,000 to compliment an asset transfer of a Victorian building into community ownership. The building is now being developed as a training centre, cafe and is being retrofitted. The money was raised from 291 members and complimented by grants.

It should always be remembered that this is risk capital, and is not something to be cavalier about, and the benefits of such investments should always be stressed, the benefits that the building will bring and so on. Why, she mused, did it work? Firstly there is a good membership, who are communicated with regularly by email. This leads to it being seen as credible by others, which in turn leads to more activity and engagement. Also they have a very strong board of directors and of activists. It is vital also to have tangible objectives and a clear vision. A final key factor was lots of good publicity and also good exposure through a regular stall in the local Farmers Market.

The second specific project was a local wholefood shop, ‘Nature Food Store Ltd’, a going concern local business whose owners wanted to retire but who were fond of what they had set up. It had a £300k per year turnover. The Development Trust raised £110,000 from a share option from 220 members in just 4 months. Now 2 years on the store is very successful and is making a surplus for the Trust. The success factors for this were that the people who were selling the business were committed and reasonable, and in fact still work there on a part time basis! Membership has led to a sense of loyalty and a sense of community, and it is now a business with a future.

Now the trust has its eyes on a piece of land that is for sale with the thought to turn it into a community woodland/orchard. She summed up her talk with the term “enterprise breeds enterprise”.  And then I was off, through the Westminster rain, heading for Paddington station and the 1.06pm train to Devon.