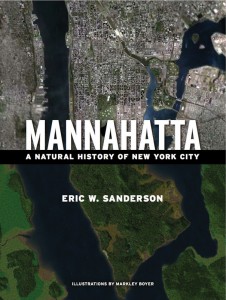 This is a truly remarkable book. The films of Woody Allen were sometimes referred to as being as much love poems to New York as they were love stories themselves. ‘Mannahatta’ and the project from which the book emerges, is a work which expresses such a deep love of place that I often found it quite deeply moving. It is an utterly extraordinary and beguiling work which, by looking both backwards and forwards, allows us to understand New York in a place that was previously impossible.

Its premise is simple. When Henry Hudson and a small crew of sailors rowed up the great estuary and passed a long, wild and wooded island, known to the local indigenous population as ‘Mannahatta’, what did he see? What, when he moored his boat and explored, would he have seen and heard? Who and what was there before him? Hudson wasn’t looking for such a place, he was actually trying to get to China, but on that day the process began that led to New York city being one of the great metropoli of the world. For the last 10 years, Sanderson’s ‘Mannahatta Project’ has embarked on an extraordinary piece of detective work, delving into the ecological history of the island, using state of the art computing and old maps to enable them to answer these questions.

We think today of New York as representing the archetypal diverse city, composed of different cultures, neighbourhoods and so on, but when Hudson first waded ashore, the island was home to one of the most diverse ecosystems in North America, with 55 different ecosystem types, and thousands of species. It was inhabited also by the Lenape, the native people, who cleared areas of the forest for food production, who hunted and fished and whose name for it was ‘Island of Many Hills’. The authors take the reader through the historical references that exist, the reports from early visitors about what they saw, and how the development of the island began, initially as a Dutch settlement (“New Amsterdam”) and subsequently New York. Sanderson and his team tried to overlay the historical unfolding of the city with information from old maps, but struggled, until they found a map from the 1770s by British Army engineers, prepared to help them defend the area during the Revolution.

The map proved an invaluable discovery, an incredibly high quality map which showed, in great precision, the island’s original hills, streams, shoreline and wetlands. Sanderson found that the map overlaid perfectly with present-day maps using GIS, allowing the building up of layers of information, such as soil types, where the rivers ran and springs emerged, and the rich and diverse mosaic of ecosystems that Hudson first observed. These are illustrated throughout the book with Markley Boyer’s amazing computer generated images of Mannahatta then and New York now, powerful reminders of the power of human beings to completely alter ecosystems. They are stunning images.

One of the most fascinating parts of the book for permaculturists is the chapter called ‘Muir Webs: connecting the parts’, which opens with the following quote from John Muir’s notebooks in 1896;

“when we try to pick out anything by itself we find that it is bound fast by a thousand invisible cords that cannot be broken, to everything in the universe”.

Muir was a naturalist (as opposed to a naturist, which is something completely different) who was a prominent conservationist and ecological thinker, held in the same regard as the great North American ecological thinkers like Thoreau and Leopold. Sanderson and his team began to look at how the huge list of species they had identified as being part of the Mannahattan ecology connected together, starting to build webs of relationships. Inspired by Muir, they called these Muir Webs, and they developed a computer programme to allow them to see these relationships. The resultant images are striking, offering a visual representation of resilience (a highly evolved version of the ‘Web of Resilience’ exercise described in ‘The Transition Handbook’). As a study of ecological resilience I have read very few other books that even come close to this one.

It is in the final section of the book that the authors take what has already been a breathtaking piece of work and step it up a gear, looking forward 400 years, to muse upon how the city might have developed if the insights and observations from the Mannahatta Project had been incorporated into the thinking behind the development of the city, alongside sustainability. Clearly the few hundred Lenape who inhabited the island at the time of Hudson’s arrival was a somewhat easier task than the millions who live there today, but, Sanderson argues, the revival of local food production would help hugely, and he remaps the city with some areas replaced by small intensive farms.  This part is, in some ways, the most absorbing part of the book, although it is frustratingly brief, offering a tantalising taste of how this work can help to map the future as much as the past.

The current issue of National Geographic magazine has a big article on Sanderson’s work, and I’ll post his TED talk when it goes up on the TED site, but if his work interests you, you will find this one of the most fascinating and absorbing books you ever get your hands on.  I can’t recommend it highly enough.

Hey Rob,
Not sure if you got round to posting or even seeing the Sanderson’s TED Talk.
http://www.earthdayny.org/ime/index.php?option=com_content&view=article&id=59&Itemid=59
Here it is. Really fascinating stuff. I am going to buy the book tomorrow.
In two weeks, I will be staying in Mannahatta.
Thanks for the inspiration and if you have any tips or links in NYC e mail me! I can also explain more what i plan to do there in order to ‘off set’ the carbon my flight will use and help appease some of my guilt.