A Recipe for the New Decade 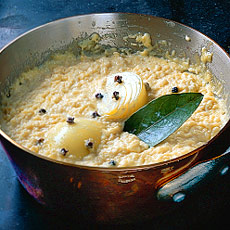 So, welcome to 2010.  This new decade of limits, of huge possibilities and possibilities, of coming home to where we are, of reskilling, reconnecting and relocalising. While Sharon Astyk has offered her cogent predictions for the new year, and Richard Heinberg has offered powerful analyses as to why tackling climate change is down to us rather than waiting for the Copenhagen re-run in Mexico to sort it out, I want to mark my first post here in 2010 with a recipe.  It somehow feels representative of the challenges of the new decade, embodying some of the qualities we need, as well as being highly delicious.  It is Traditional Bread Sauce, although we could call it Transitional Bread Sauce (as my fingers mistyped it when I initially typed it in). 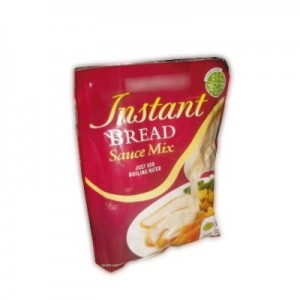 In my family, every Christmas day we make Bread Sauce, and it is always exquisite, and we always wonder why we don’t make it more often, and then never do.  Yet some of the qualities it embodies that we will need in the new decade include;

So here is the recipe, based on Delia Smith’s, but adapted slightly so I don’t get sued.

Halve the onion and stick the cloves into it.  Put your studded onion, with the bayleaf and peppercorns into a saucepan with the milk.  Add some salt and then bring the contents of the pan to the boil.  Take it off the heat, cover, and leave in a warm place for 2 hours.  Then, when you are ready to make the sauce, take out the onion, bayleaf and peppercorns and put them to one side.  Stir the breadcrumbs into the milks and add 10z of butter.  Keep the pan on a very low heat, stirring occasionally, for about 15 minutes, until the crumbs and swollen and you have a thick sauce.  Now put the onion back in and leave the pan in a warm place until you are ready to serve.  When you are ready to go, whip the onion out, reheat gently, beat the rest of the butter in, and check to taste.  It usually accompanies chicken or turkey, but makes a great side dish to lots of meals, especially those involving roast vegetables.

Tweets that mention A Recipe for the New Decade » Transition Culture -- Topsy.com
4 Jan 10:36am

I remember that we always made it too, to eat with the turkey etc. We had the benefit of unpasteurised milk and cream – which, when it sours, does not get that rancid taste that the pasteurised look-alike aquires.

There ends this brief ode to real bread sauce..

Our family always loved Bread Sauce and I still do. But … (many) years ago I bought my Mum “Coping with Christmas” by Fanny Craddock as an Xmas gift. I eagerly looked in the index and found the entry for Bread Sauce and it gave a page number. Turning to that page I saw the entry and underneath it said “This is so disgusting that I’m certainly not going to provide a recipe”!

This is excellent! I am participating in, and blogging about, a local foods cooking challenge, and one of the things I have had a lot of trouble with is finding local grains. I’ve got veggies, milk, meat, and eggs, but local organic grains are surprisingly hard to come by, at least where I am. However, I am going to try to find some all-local, all-organic bread and make this wonderful recipe for smothering some roasted root vegetables!

I’ve never heard of bread sauce in my life. Well, maybe I skimmed over it in a cookbook but I had no idea it was revered as so tasty. Thanks for the recipe!

A simple and elegant recipe indeed, much more interesting than (I quote) “add water, heat in microwave, suppress urge to throw up, pour over food”, and undoubtedly much better tasting.

Making it yourself is simple compared to whatever goes on in the Instant Bread Sauce Factory of Horrors.

(although, the bread sauce I had at the lovely Bloomfield House Eco Hotel in Bath was possibly even better!) 🙂

I’m an American, so I suppose it’s no great surprise that I’ve never heard of bread sauce. Though I am a foodie, and rather fond of the foods of the British Isles. This sounds good; sort of a British riff on a basic French cream sauce. (Sorry! Do I need to duck and run away now?) I’ll give it a try the next time we have bread going stale.

For us Yanks in the crowd, is Creamy Milk something like our Whole Milk?

And is Double Cream like what we get in a carton of Cream?

Caused in me a complete recall of a scene at our childhood table of dad serving bread PUDDING {made from all the stale bread in the house}, with milk bottle on the table instead of milk jug, and washing drying on lines criss-crossed above our heads…. Why? Because mum was not there; whisked away to have her very 1st hospital baby(boo), while dad was at home caring for us previous(5) offspring…. {fun}!

That’s very complicated! My Mum used to just simmer chopped up onions in milk for a while, add a bit of pepper and salt, and pour it onto the breadcrumbs. So that’s how I make it.

The best part of Christmas when I was little was cold chicken, baked beans and chips, with loads of bread sauce!

a recipe for the new decade??? that “…somehow feels representative of the challenges of the new decade, embodying some of the qualities we need”

it’s a nostalgia pie. a nod to the “1950’s hovis advert” vision of the future. nice! but does it make me want to fall in love with our future? if this represents some of the qualities, what are the others? alone, is this representing the “dull” future your PHD interviewee had envisioned? in your previous post “What if they held a Climate Summit, and nobody came?”

Using breadcrumbs as a thickener was a mainstay of traditional UK cuisine – can be used to thicken any sauce – loads healthier than a butter/flour roux. Don’t even need crumbs – just soak stale bread in appropriate liquid and then mash – delicious silky texture.

Bread crumbs also a principle ingredient of a ‘proper’ Christmas pud (bought one this year due to unforeseen change of plans – a terrible cakey affair – not right at all!)

There are loads of recipes for using stale cake crumbs for puddings too.

A warning – you do need proper bread – much factory bread goes mouldy rather than stale – allow to dry out – don’t store in plastic.

@Shane – I think Transition needs to do much more to emphasise high-tech energy descent. Am a complete convert to 3 layer clothing systems and was delighted to find that fleeces etc can be made from recycled plastic bottles. Does anyone know of a UK company doing this? Would love to see a community enterprise recycling bottles, supporting production of local merino wool and providing every child with a set of thermal underwear and school uniform. We don’t know how to dress any more – all those children on the news playing in the snow without even a hat!