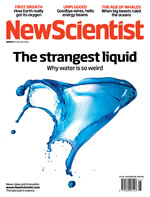 I am featured in the hallowed pages of New Scientist this week in its Opinion section, under the heading “Rob Hopkins: getting over oil, one town at a time”.  The only slight glitch with it is that the otherwise very attentive interviewer misheard my response when she asked when I thought we would see price volatility arising from peak oil.  I said “2013”, which she heard as “2030”, thereby placing me alongside Ed Miliband and Malcolm Wicks in terms of making absurd and profoundly optimistic predictions about peak oil.  Jeff Rubin would not agree with that…  Oh well.  Not sure it gives the best picture of what Transition is about, but here it is anyway….

The founder of the Transition Towns movement explains why he is optimistic that we can survive peak oil and minimise climate change.

Can you tell me more about the Transition Towns movement?

A Transition Town is formed when a group of individuals gets together to ask how their community can mitigate the effects of a potential reduction in oil and drastically reduce their carbon emissions to offset climate change. The scheme has become so successful we now have 250 official Transition Towns and Cities worldwide, with many more interested in becoming involved.

Transition Towns have set up bartering systems like local currencies and seed exchanges; what other initiatives are they taking?

In England, Totnes and Lewes are setting up the first energy companies owned and run by the community – Transition Stroud has written the local council’s food strategy. One group in Scotland has managed to get access to land for new allotments in their area and the first university scheme has just been set up at the University of Edinburgh.

You’re about to launch an Energy Descent Action Plan for Totnes. What is it?

It’s based on the idea that the way out of our current economic situation isn’t to carry on as normal. We have to look at the local economy and ask what a town could look like in the next 20 years if oil production has peaked – “peak oil” – and climate change is a reality. So the vision for food might be that people have a local food economy with more urban agriculture employing local people. We then work out how we might achieve this. For instance, we look at the land available, how it is used and to what degree the area could be self-reliant.

When do you think we’re going to run out of oil?

We’re probably not going to run out of oil in our lifetime. There won’t be a mythical moment when someone in Leicestershire pours out the last drop into their car and that’s it; what matters is the point at which we move from having more cheap oil available to having less cheap oil available each year. It’s the shift from a time when our economic success, our personal prowess and wealth is directly linked to how much fossil fuel we consume, to a time when our degree of oil dependency is a vulnerability. By 2030 we will be entering a time of increasing volatility in terms of price and availability. For an economy which is designed to function on a plentiful supply of cheap oil, that’s a historic transition.

Are there specific characteristics that make a Transition Town more likely to succeed?

We have a thing called the “cheerful disclaimer” – which means we have no idea if the idea is going to work or not. It’s an invitation to have a go.

If the majority of people in a Transition Town were on-board, are they more likely to survive peak oil or climate change?

There are no guarantees that your community will be immune to climate change. But I think human beings have an in-built survival mechanism.

My answer to the last question is “definitely yes”. It isn’t so much the particular energy saving steps they take as that the strong sense of community and mutual support that comes from Transition activities makes a town much more resilient than one in which people are less connected to each other.

Great talk. Jeff Rubin IS John Wayne, “Get off oil, get off your butt, and get outta that car”.

Here is the correction I sent to the editor of New Scientist today….

While honoured to appear in your “One Minute with” piece this week, there was one small error which I would like to correct. I was quoted as saying that I thought we would start seeing the very real impacts of peak oil by 2030, whereas in fact your researcher had misheard me saying “2013”. With the International Energy Agency warning of a ‘supply crunch’ by 2015,and a whistleblower reported in the Guardian recently arguing that the IEA’s figures were knowingly overstated, the CEO of Total stating world oil production will never exceed 89 million barrels a day, and the Peak Oil Task Force, comprising many leading UK businesses including Virgin and Stagecoach, putting the date of peak oil as 2013, the 2030 date attributed to me puts me way out on a limb inhabited only by extreme optimists, economists and, unfortunately, the British government.

The Transition movement argues that designing for a world of volatile oil prices and diminishing net energy requires creativity, compassion and community, and that its far reaching implications require a rethink of many of the ways in which modern society conducts its business, leading to a more localised economics, and a redefining of prosperity, as Tim Jackson of the Sustainable Development Commission recently argued in ‘Prosperity without Growth”.

With thanks
Rob Hopkins
Transition Network

[…] it is used and to what degree the area could be self-reliant. and Rob Hopkin's response to it Transition Makes the Hallowed Pages of New Scientist Transition Culture __________________ "But do 'climategate' revelations justify the sceptics’ claims that […]

Coul Rob or anyone else tell me which group in Scoland has secured land for new allotments? I’m doing some research in this area and it would be really helpful. Thanks.