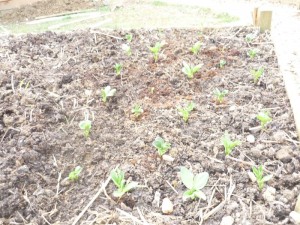 Broad beans emerging from the soil in the garden

When I lived in Ireland, I once met an elderly gentleman who told me that he grew up in an old cob house in Limerick which had a huge inglenook fireplace, designed, a la Newgrange, so that on one day in the year, the sunlight came down the chimney and lit up the whole hearth, alerting you to the fact that that was the day to plant your potatoes.  I have always taken that as an awe-inspiring example of how, often, ‘simple’ dwellings were often nothing of the sort, but on reflection, its not a very reliable approach, it might be cloudy, you might have the fire lit, or even just be out for the morning.  Anyway, I don’t need a precisely oriented chimney to let me know Spring has arrived, it’s all of a sudden underway whether I want it to be or not (and I very much do…). 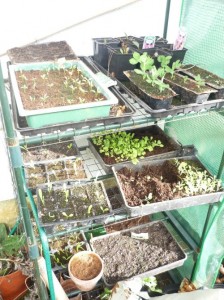 Seedlings underway in the greenhouse

This short post is really about nothing other than me getting excited about gardening, so if you are expecting anything more meaningful, switch off now.  Spent a couple of days of Easter in the garden, and there is that time when things that had just been dawdling along, growing a little bit now and then, all of a sudden accelerate and start growing like fury.  It usually coincides with the birds starting to sing that bit more loudly, the days being longer, and all of a sudden you feel that the housebound gloom of the winter is a thing of the past.  That ‘tipping point’, for me, was this weekend. 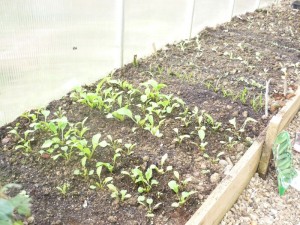 I planted out my broad beans and peas (potatoes went out a couple of weeks ago), sowed loads of seeds, and my greenhouse is now home to a range of salads engaged in an ‘eat me first’ competition (I think the rocket is going to win: see left).  Beetroot seeds have been sown and my onion sets are sending up green shoots.  I sowed peas and beans in the greenhouse in November, many of them didn’t make it, but those that did are now racing ahead, with the promise of early fruit.  I love the fact that now, as opposed to two weeks ago, each morning visit to the greenhouse reveals noticeable growth.

The longer days, the fact that for once, things are drying out, the sunshine, the emerging leaves on the trees, it’s wonderful and there are few pleasures more delightful than the early morning watering of a greenhouse full of salads.  Roll on the summer.

don’t tell anyone but I got over-excited with the seed catalogue the other day and bought some ‘squashkin’ seeds – half giant grey pumpkin, half butternut squash… we’ve been bringing seedlings up in the house and the first transplants (peas) are going onto the allotment this week…

Rob I share your excitement at those signs of spring in the garden…here in Northern Michigan the animals are active and birds are returning…the Sandhill Cranes, all kinds of ducks, geese, swans and the eagles nest near our house is holding a very determined looking mama! This time of year does bring lots of earthly gifts!!!

Yes – it was a bit like that for me this weekend too Rob. Not quite there with my raised beds yet and the greenhouse is still full of garage clutter after the house move, but the walk-in chicken run is on its way and the broad beans and raspberry canes are growing vigorously. Now waiting for buds on the walnut tree. Daffodils everywhere and spring has sprung.

ooooh – here on the other side of the world we are welcoming the shortening days since the equinox and look forward to a good rest that one can sense in the stillness of autumn and the quiet of the coming “winter”. The first good rains of the season (lets hope it continues) have settled the dust and there is a tinge of green everywhere as damp coolness calms this sunburnt country.
Wow, our first summer of Transition felt a big one, talk about energy out!
Thanks for this and everything.
Need to plant broadbeans – our winter crop 🙂

A Comma butterfly kept me company all morning, reminding me to allow a few nettle corners to develop again this year….

Ooooh, i share that sense of excitement…except no garden for me now, that’s the problem of living in a flat hey? I must get in a gardenshare, but after I move home, otherwise it’s a waste. i do remember my veg patch in Kent, it brought me enormous joy and satisfaction. But now I need your help…well, my parents need your help really! They have a badger and, much as I love badgies, they in turn love my parents’ veg patch. when i visited ma ‘n’ pa last weekend, I enquired on progress with planting seeds, and my ma replied she’s quite depressed by the thought that the badge may not leave them anything at all to eat this year. Badge took the parsnips and carrots last year, and returned at a later date for the beetroot…the whole lot of them all… It was a very sad sight, i was there to witness, just some turned over bare soil where badgey had been snuffling and scoffing ma n pa’s winter food store. and now they’ve heard that badges’ll also take yer peas and beans… At least they harvested a good crop of leeks last year… unlike poor Rob 🙁 So, of course, the question i beg of all you knowledgeable veg growers is…how do ma n pa stop the badgies? answers on a postcard please… no, prefer right here asap please please!