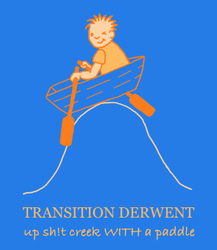 Here is July’s round up, August’s will be along shortly, we are still catching up after the break.  We’ll start this with a plea to all you Transition initiatives who have wonderful projects that you’re not telling us about! The plea is to add them to the Transition Network Projects Directory here so everyone else can see them too, and get new ideas for what they can do…   So, for July we start in New Zealand, where TT Kapiti is putting on a series of skills workshops to see you through the dark winter months and prepare you for the summer, so if you’re around that way, why not join in and learn a new skill. Here’s New Zealand’s James Samuel commenting on Tradable Energy Quotas (TEQs), with a couple of little movies to help explain why carbon trading isn’t an answer for reducing carbon emissions… if you’re interested in knowing more about TEQs, then have a look at Shaun Chamberlin’s talk and slides on the subject to help you make sense of it all. 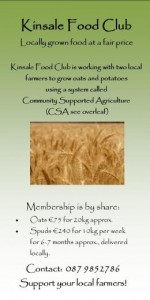 Transition in Australia continues to spread, with a new TT in Maitland and another in Derwent Valley, while T Kenmore District is holding its two-year anniversary celebration…congratulations to you all!  TT Maroondah’s Food Group is being very busy… look here to see what they’re up to and maybe get some new ideas. TT Sherbrooke is holding a monthly food swap, while TT Blackwood is preparing for a winter warmer cook up and sharing recipes so all the participants can prepare the lovely foods at home.  In Ireland, there’s some great news from TT Kinsale as its Food Club is now working with two local farmers to develop a Community Supported Agriculture scheme for potatoes and oats. They need more people to sign up, so if you live locally, why now join them and enjoy a share of the harvest?

TT Den Helder in the Netherlands has shared the short film below to show us what they’re up to, while the new group at Ibiza Transition Island has news of all its activities here.

Here is a talk from Poland (in Polish) by Kamil Pachalko from Southend in Transition at an event in Poland… beyond it being about Transition, your guess is as good as mine as to what is being discussed…. 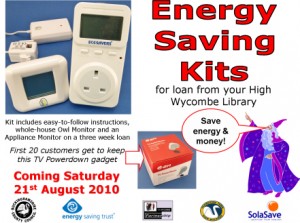 In the UK, congratulations go to TT High Wycombe for the imminent launch of its Energy Saving Kits-for-Loan project, funded by the Wycombe Strategic Partnership, and it has also donated Transition books to the library to promote this project.  Other TTs have received some funds too:  the Co-operative supermarket chain has been giving out grants of £100-£150 to help communities reduce their carbon footprints, and TT Nailsea will use their grant to fund its monthly market stall. Congratulations also to PEDAL Portobello TT for its award of £72,000 from the Scottish Government’s Communities and Renewable Energy Scotland to help cover the legal and planning costs of establishing a community owned wind turbine on the seafront.  Also on energy, T Shipston held a ‘Community Ownership of Renewable Energy’ conference where they decided to set up a community energy company, and one of their first ideas is to install solar panels on the roofs of Stratford and Warwick Hospitals.

TT Exmouth has a great newsletter here (where you can meet the Strandbeest, which you’ve just gotta see) and is celebrating its two-year anniversary, so congratulations to them too! TT Louth has some lovely pictures and happy memories of their food and musical gathering in their community garden. Wivenhoe TT has served up a lovely vegetable garden curry at none other than from the very fine tabletop eatery on Wivenhoe Railway station… wonderful and highly appreciated it was too.  Here’s an update on TT Tooting’s upcoming Harvest Foodival, and if you want to know more about the wider TT Tooting action, you can listen to a podcast interview with City Bumpkin talking on exactly that subject.  Heading out into the suburbs, here’s a short film about the Electric Vehicle exhibition that Transition Town Kingston just held… 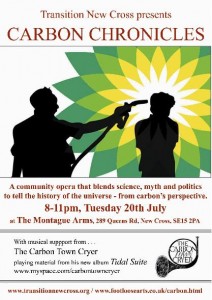 There are a couple more new groups to congratulate on their emergence:  T Greenwich and T Belfast, so do get in contact with them if you live locally and want to join in the fun.  TT Sturminster Newton enjoyed a lovely farm walk and saw a huge diversity of crops being grown, and some nice pictures to prove it. TT Newcastle is holding monthly open space meetings for anyone interested in helping to make Newcastle more resilient and sustainable, so why not join them if you live nearby. TT New Cross has been contributing to a collaborative community arts project, in the form of a participatory opera called ‘Carbon Chronicles’ that aims to inspire and provoke discussion through music and humour. Have a look at some great pictures that Naoki Tomasini, an Italian freelance photographer, took during his visits to TTs around the UK. 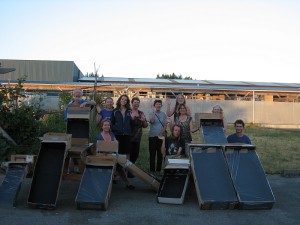 Workshop participants at Transition Powell River's solar food dryer workshops showing off the fruit of their labours at the end of a hard day's sticking and glueing....

In the US and Canada, TT Powell River held a ‘Build Your Own Solar Food Dryer’ workshop, and got some nice pics too. There are several new groups to congratulate: Bowen in Transition (and this page has some great diagrams and a sketched personal actions chart), TT Hadley, Transition (Upper) York Region, TT Venice, T Lake County, Clear Lake Transition Initiative, and then there’s a request for people to help start Sussex County TT, so if you’re local to any of these towns, islands, lakes or regions, go along and join the fun!

T Los Angeles is holding a mini-conference in September to share information about the Transition movement, so if you live close by, go and check it out. TT Ann Arbor and a local school are hosting the second annual Ann Arbor Reskilling Festival where you can learn skills from permaculture to knot tying to cooking with sun ovens to making toys from old clothes. There’s also a little film to watch. A very worthwhile event to attend! TT Ashland is preparing for a Local Food Treasure Hunt in September that begins with map-reading your way to find your food, and then… And for those interested in how Transition might work in cities, have a look at Transition in the Big City part I and part II, which tell of how Transition ideas are being applied in Los Angeles.  Heading south again, here is a short slideshow of pictures from the second Transition Training to be run in Chile…

And finally…. (as they say)…. he’s something rather odd which offers a fascinating take, from a young person’s pespective, on the Transition movement… (advance knowledge of who Spongebob Squarepants is would help greatly…) … .  See you next month!

With thanks as ever to Helen and to the wonder that is the worldwide web….

Tweets that mention A July Round-up of What’s Happening out in the World of Transition » Transition Culture -- Topsy.com
31 Aug 1:51pm

[…] This post was mentioned on Twitter by ndh, Rob Hopkins. Rob Hopkins said: Here's July's round up of what's been happening out there in Transition… films, links, pics, projects..amazing: http://tinyurl.com/399omwj […]

Actually, if you’re looking for an intro to TEQs, I wouldn’t particularly recommend the talks linked to above that David Fleming (inventor of TEQs) and I gave at the London School of Economics.

A far better intro would be David’s Energy and the Common Purpose, available free here:
http://www.theleaneconomyconnection.net/downloads.html#TEQs

Incidentally, there is also an All Party Parliamentary Group on Peak Oil report into TEQs, which is now complete and will be launched in the coming months.