« The Hale Local Food Market: a short film
… This Just In From Transition Laguna Beach… » 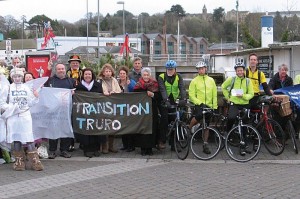 In terms of practical activities, awareness raising is where you start.  Your success, or otherwise, in doing it well will be a key factor in how successful your initiative is going forward.  It will be a key part in your BUILDING STRATEGIC PARTNERSHIPS (2.12) and in sustaining MOMENTUM (3.6).

Awareness and understanding of climate change and peak oil, and of the scale of the Transition facing society, are very low.  People are bombarded with conflicting information; climate change is a huge crisis/climate change isn’t a problem/we are about to run out of oil/we will never run out of oil.  For many people the larger picture is so bewildering and confusing that most people switch off.

The ‘sustainability communications agency’ Futerra put the key principle of awareness raising beautifully: “sell the sizzle, not the sausage”, meaning that in order to create engagement or behaviour change, we need to communicate the possibilities, tell new stories, communicate an idea through feelings and sensations as much as through the logic and inherent common sense of the idea.  Awareness raising is a vital aspect of Transition, so it is key to do it well.

Here’s how NOT to do awareness raising.  Put up a few unexciting posters only in the places that the people who are likely to already agree with you anyway would see them (the health food shop and the hand-made shoes shop) for an event where a rather depressing film about peak oil or climate change will be shown.  People arrive and after a short, rather shy and bashful introduction, the film is shown, after which everyone goes home.  We can do a lot better than that.

Try to design awareness raising events so that they are energising and memorable.  Ensure that any film or talk also factors in time for people to meet each other and discuss the issues raised.  Ensure that the branding for the posters for your events, and for other materials related to your initiative, is consistent and accessible.  Make sure that speakers keep to time so as to not affect the timing of the whole event.  Collect people’s emails so they can be kept informed about future events.  Be playful.  An early event run by Transition Stroud featured a screening of the film ‘The Power of Community’, (which tells the story of Cuba’s response to its oil shortages of the early 1990s), accompanied by food and followed by salsa dancing.

Try to offer talks in places where such events might not usually happen.  Offer talks in schools, to church groups, to the local Chamber of Commerce, in mosques and temples.  Transition Town Tooting has taken a fascinating approach to awareness raising from early in their existence, with their Trashcatchers Carnival, their annual Foodival, and their Earth Talk Walk, which visited all the centres of worship in the community to explore each faith’s take on care for the Earth, all taking their awareness raising work beyond the ‘usual suspects’.  Don’t show films just the once… films that create a buzz are worth repeating, people will tell their friends about really good friends.

Awareness raising events can also be a good opportunity to start engaging with local councillors and politicians.  You might, for example, hold an event exploring how the area might respond to sharp rises in oil prices, and invite local politicians to be part of a panel to debate the issues raised.  This approach is particularly useful in the run-up to an election.  Before the 2010 General Election, many Transition initiatives, such as Transition Luton held hustings events[1], inviting their local candidates to discuss issues relevant to Transition.  Transition Belsize in London developed the idea of inviting local politicians to sit in armchairs at the front during film screenings, and then inviting them to give their thoughts afterwards.

Awareness raising need not be restricted only to events.  One of the early parts of awareness raising in Totnes was the ‘Skilling up for Powerdown’ evening class, which ran over 10 weeks and gave an in depth immersion in Transition thinking and practice.  Awareness raising can also take the form of practical workshops, such as Transition Town Inishowen’s do-it-yourself solar panel workshops.

Transition Lancaster’s awareness raising took the form of a newspaper, the ‘Transition Times’ which was to be distributed to 20,000 homes in the area in advance of their Unleashing.  Unfortunately, the company taken on to distribute them failed to do so, and most of the beautifully designed papers failing to reach their destinations.  Other groups have also produced similar publications, such as Transition Town Worthing’s Post-Carbon Gazette.  Transition Town Haselmere have a monthly column in the local Herald newspaper.

Another good awareness raising strategy is to raise funds in order to donate books and DVDs to the local library.  Transition Town Horncastle did this recently, following in the footsteps of other initiatives that have done likewise.

Producing a regular email bulletin for those who have subscribed to your email list is also a key way of communicating with people.  Some good examples are those produced in Totnes, Lewes, and Exmouth.  However you raise awareness, what needs to come through is the ‘sizzle’, the sense of the wider process, the invitation to be a part of making history, the invitation for people to bring their creativity, their ideas, to the process.

Organise an ongoing programme of awareness-raising, which strives to avoid creating despondency , which avoids bamboozling people with too much detail, too many graphs and too much jargon.  Make its core function the building of a positive vision of the future.  Distil the essence from the available information.  Ensure that awareness raising events are fun, engaging, allow people to get a sense of something historic being underway, and allow them to meet each other.  Make sure they start and finish on time.  Make your evenings and events memorable and thought provoking, and use imaginative ways to capture the thoughts of those attending.

Raising awareness about peak oil and climate change brings with it an obligation to do so with an awareness of the risks of POST PETROLEUM STRESS DISORDER (1.1).  Designing into your events some form of EMOTIONAL SUPPORT (3.5) can make for much more nourishing events.  Events also offer the opportunity for STANDING UP TO SPEAK (1.8), giving some of the emergent voices in your initiative an opportunity to gain valuable experience of public speaking.  When choosing speakers or topics, keeping in mind an awareness of CRITICAL THINKING (1.2) will also be very helpful in terms of sustaining a good reputation for the project.  Try to ensure that you maintain an element of VISIONING (2.6) in every event, and share news about PRACTICAL MANIFESTATIONS (3.9) that are underway and in need of support.  Beyond events, you might find that TRANSITION TOGETHER/TRANSITION CIRCLES (4.1) can be a great way of raising awareness among those less likely to attend actual events, as is running a TRANSITION TRAINING (2.3) in the community too.