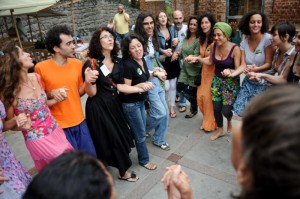 Here's what happens at a Brazilian Unleashing ..they do the hokey-cokey and they turn around... (sorry, this joke probably only means anything to English readers....)

We start this month’s update of Transition inspiration, activity and celebration with wonderful news from Rio de Janeiro and the launch of Transition Santa Teresa, which was attended by 200 people from the neighbourhood association, the local chamber of commerce, local NGOs and residents from Santa Teresa and the neighbouring slum. So we send huge congratulations to T Santa Teresa! Here is a film about some Transition goings-on in Brazil, including a Transition rap in Portugese… fantastic…

It’s also been very exciting this month to see Transition South Lantau pop up in the google alerts, with good news of what’s happening in their part of Hong Kong (and a most beautiful picture to admire).

In the US, Transition Town Houston has lots of interesting activities coming up including solar tours, permablitzes and film screenings, while Transition Lyons (Colorado) has given us an update on all the activities they’ve been getting up to. Transition groups in Los Angeles held a seed and herb swap with all sorts of side events, and there are loads of useful resources and information on the webpage too, so have a look and grab some ideas! Transition Northfield organised a community workday to bring to community together and they prepared fresh apple cider, planted a tree and built a chicken coup. Transition Town Ashland has been reviewing and discussing their town’s updated transport plans and preparing people to given written or verbal input into the process to encourage a low carbon/low energy future. If you’re around that way then why not get involved so you can add to the pressure for a sustainable transport system.

Congratulations to two new Transition Towns – Viroqua Transition Town Initiative and Transition Coastside – so we welcome you both! And then congratulations to Transition Reno on their Great Unleashing and becoming the 50th official TT in the US! Two stories for you to enjoy here and here. Transition US held a Regional Summit in Cascadia, with lots of US Transitioners describing and discussing various Transition activities going on in the US. Transition Staunton Augusta has a new online magazine – Transition Voice – so take your time and read all about it. Transition Sarasota is hoping to harvest 30,000 pounds of fresh produce for their local food banks and they need volunteers to help out. They’re also holding a local food open space and a local currency debate, great activities to get involved with if you’re round that way. And finally for the US, here’s Sandpoint Transition Initiative’s fantastic Folkschool, which teaches the arts and crafts of sustainable living, and there’s a lovely story for you to enjoy too.

In Canada, Transition Town Orillia informed the local community of a resource called ‘Vote Smart 2010’ which allows voters to access information about where their candidates stand on issues like environmental protection, the green energy economy and food security. Also we welcome Transition Salmon Arm as a new initiative, and send encouragement to Quesnel which is thinking of becoming a Transition Town, so if you’re around either of these towns then get along and join in the fun!  Transition Toronto’s Andrew Know recently gave a talk at a Climate Change conference in the city: here is a film of his talk… 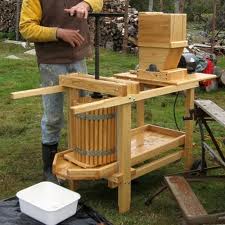 It’s that time of year for making all things appley…Transition Town ManorHamilton, County Leitrim Ireland, organised for an apple press to be available at the farmers’ market and in the market yard so people can make apple juice to take home, and there’s a nice picture of the press in action (see right). 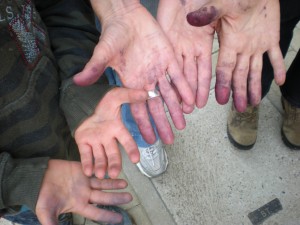 Transition Town Wivenhoe has been out for some blackberrying adventures and there are loads of fabby pictures! They also have a Chicken 100 project – do take a look, it’s great! Transition Town Portobello – PEDAL – held an Unplugging and Reconnecting Sunday and it sounds very wonderful…and they’ve just held an apple day and Halloween party with a chance to share favourite appley recipes. Taunton Transition Town has a report on the Abundant Taunton event, and introduces the online foodmapper resource for mapping Somerset’s community gardens and allotments. Have a look, then maybe you can organise a food map for your county / state / local area. Transition Town Fareham is visiting local junior schools to talk to the children about the benefits of growing and eating their own food, and they’ll also be planting apple trees in the school gardens. 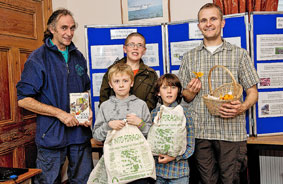 Transition Town Kingston has done really well and raised some funds for their first paid post: an Operations and Volunteer Support Coordinator… wonderful news! Marsden and Slaithwaite Transition Towns (MASTT) also held an apple squishing day with lots of other appley activities, while Alness Transition Town received such huge support for their free food forage that they’re having to re-run the event for those who couldn’t fit into the venue the first time round! A Zero Carbon Concert is being organised by Transition Town Deal towards the end of November, simultaneously with lots of other towns across the world, in the run up to the UN Climate Summit, so why not go and enjoy it if you’re around that way. Transition Town Alnwick held a very successful Energy Advice Day…what a great idea! Transition K&C (Kensington and Chelsea) have made a short promo film about what they are doing… here it is…

Transition Town Shrewsbury got together with Self Help Africa to organise a World Food Day with loads of activities and awareness raising.  More food news as Transition Town High Wycombe launches its ‘Food on your doorstep’ project, and Transition Town West Kirby has risen to meet popular local demand by helping to organise the first local food market for Hoylake…great for the local people, and we wish you every success. Transition Town Worthing is holding some re-skilling workshops, and here’s some footage of the tool sharpening session. Here’s a great Transition University film from People and Planet to help universities become resilient, low-carbon, community-led institutions. Finally for the UK, we’d like to welcome Transition Town Epping Forest, Transition Town Wanstead, and Holbrooke in Transition, a parish within Transition Horsham, and congratulations to Stamford Transition Town, which has just held its official launch and celebration.

In New Zealand, Transition Town group the ‘Whangarei Youth Forum’ wants their community leaders to listen to their collective voice as they call for alternative fun activities for the youth in the area to help reduce boredom and keep them away from alcohol, drugs and gang culture. Rebecca from Transition Kaitkaia has been interviewed about community currencies and time banking on ‘Voices from the North’, and you can read and hear that here. In Australia, Transition Kenmore District held a forum to address the use of e-bikes as a sustainable form of transport. In Nambour, a parcel of land purchased by the local Council has been made available to Transition Town Nambour and the local community to create a community garden to help them become more resilient and self-sufficient. Transition Town Newcastle has got together with local permaculture groups to organise the Fair Share Festival, which focussed on economic and social justice issues, as well as sharing and caring for the earth.

In Europe, Transition in Geneva is off to a fantastic start with a meeting attended by 150 people, and Lyon also held a Transition meeting attended by 120 people where they introduced Transition ideas, showed parts of the In Transition 1.0 movie, and gathered many e-mail addresses of people interested in being part of the group and the steering group. Great news! Transition Town Gottingen in Germany held their first event, ‘Apfelfest’, and even with my very poor German I know what that means… if anyone is still struggling, here is a short film of what they got up to…

We’ve also heard that the mayor of Sallies de Bearn, France, is providing the Transition initiative with land in the middle of the town to create ‘Un Jardin examplaire’ where old local varieties of nut and fruit trees will be planted. Fantastic news! There’s also a new website for Transition in France, which is very exciting and should help a lot with spreading awareness about Transition in France and keeping people updated with what’s happening. There’s an interview with Rob in the European, and in Italy, we’re excited to know that the ‘In Transition 1.0’ movie has been selected for screening at the Tutti nello stesso piatto Festival Internazionale di Cinema Cibo & VideoDiversità.

As always it is great to hear & see what’s happening around the world with Transition.

Here’s a video from Japan.

From a recent All-Japan Transition meeting
and Transition Summer Festival (held in
Tsuru City in the Yamanashi countryside
about 2 hours by train from Tokyo)
please see this link for some qualiy video
(it is all in Japanese but the visual
content is fairly easy to understand).