Unleashing of the First Transition Favela with Rap and Samba

Welcome back to Transition Culture…  You’re looking well, I hope you had a good break.  We start with a warm sunny story to bring a smile on these chilly winter days, kindly penned by May East about the Unleashing, just before Christmas, of the first Transition Favela, in Brazil.

It was a sizzling Saturday morning in December when members of the low low-income Brasilândia community of 247.000 people in São Paulo, gathered with great expectancy for the official unleashing of ‘Transixion’ Brasilândia. Led by the initiating group created earlier in May by members of the Stickel Foundation, with representatives from the arts community, environmental groups, health workers, educators, local authority the first part of the morning was dedicated to celebrate a remarkable chain of achievements. 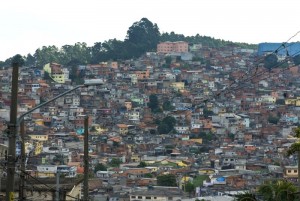 In only 8 months, 85 community members have gone through the Transition Training with many of them studying the Portuguese Primer.  This combined with their inherited resourcefulness, the ‘mutirão*’ spirit and emerging social entrepreneurial skills have generated 7 working groups and many actions on the ground: 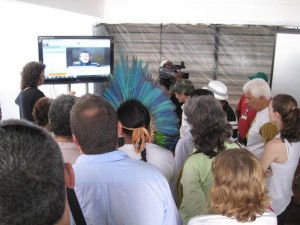 In the second movement of the morning members of the working groups shared their common vision for the next 20 years, result of a recent back-casting exercise. This was witnessed by a wider circle of community members, reps from the local municipality, health services, Transition USA, Transition Granja Viana. João Leitão from Transition Pombal connected via Skype and shared ideas on how Brazil and Portugal could further exchange experiences and collaboration and later on Rob Hopkins came on line.  With an eager audience and faulty equipment we could hear and see Rob but Rob could only see us! 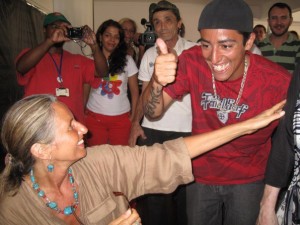 One of the highlights was when Japa one of the young Brasilândia movers sang to Rob the Transition Rap, which you can hear here.  Rob positioned himself in the flow and unable to listen, danced in sync in the other side of the screen.  The crowd was amazed and amused!

Other traditional acts came to animate the party.  A local samba composer and poet, son of one of the pioneers of Brasilandia, and the young indigenous leader Sia Kaxinaua from the Upper Juruá and Purus Rivers in Western Amazon shared their songs and visions for a resilient and healthy Brasilandia. 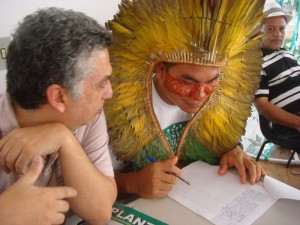 The unleashing ended in high spirits with all signing the formal document to be sent to Totnes.  For all the records this was memorable morning of an enriched community, infected by the transition virus, being translated into a joyful, empowered and unique opportunity of regeneration of their loved Brasilândia- land of Brazil.

How absolutely fantastic, inspirational and really moving. We have much to learn about community engagement from you guys, and doing the work most relevant and useful to each place rather than what WE might think is needed – cracking!

Florestania! Just what we have and want more of in the Forest of Dean where we are fighting to stop the sell-off of Forestry Commission land. Big thank you to Brazil for the inspiration.

A rich fabric in color and sound. Wow!

Thank you for more good news….let’s keep it flowing.

Interesting post – and then Brazil, one of the future “Energy Super Powers”- mexico was in a similar situation some 30 years ago…
Brings new insights regarding the adaption of the transision concept (still very much focused on solutions for the afluent world) in contexts of lee abundance…
saludos

Interesting post – and then Brazil, one of the future “Energy Super Powers”- mexico was in a similar situation some 30 years ago…
Brings new insights regarding the adaption of the transision concept (still very much focused on solutions for the afluent world) in contexts of less abundance…
saludos