« Might peak oil and climate change outlive their usefulness as framings for Transition?
What Worthing are (is?) up to… »

Postcards from the Future 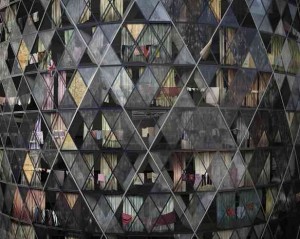 As we have fun here working on some of the photoshopped images from the future for ‘The Transition Companion’, my attention was drawn to an exhibition on at the National Theatre until May 31st (in the Olivier Theatre Exhibition Area on Level 1).﻿﻿﻿  It is called ‘Postcards from the Future’ and it uses large, backlit photoshopped images of London in a future world suffering the impacts of climate change.  As the artists put it, “even we were surprised by the way the story unfolded as the scene was created. Each picture has become a mini soap-opera, alive with colour, drama, triumph and adversity as our city is transformed and Londoners adapt to meet this change.”  Some very Parliament Square rice paddies and the Buckingham Palace shanty are especially eye catching I think.  Well worth checking out if you are in London.

I prefer the positive images of change, ones that give hope, like those in the Totnes EDAP. These images are very cleverly done but encourage the majority to put their heads in the sand and hope it will never happen. Like the upside down H curve, we need to think and visualise in positive ways. Sell the Sizzle of the Future not the Frazzle ! The queen digging her own allotment plot in Buck Palace gardens might have been better !.

Boring… not clever (loads of this has already been done) and not inspiring.

I confess that I find the idea that “positive” marketing of the future in a world where the only reasonable scientifically based expectation is that the majority of the species Homo will die from its failure to adapt is somehow more desirable than the unvarnished truth a bit disingenuous. Marketing has been busy pitching the moronic economic viewpoint that infinite growth is viable in a finite planet for far too many years. That, my friends, is why we’re in the untenable position of contemporary culture. Transition is an attempt to provide the adaptability necessary in a changing environment. Most species die out eventually, because they cannot adapt to a change in environment; Humans have become too inflexible socially to adapt to the changing requirements of the environment we are causing. We haven’t even got the sense to change the pressures we are bringing against ourselves.

Listen up!
Our President can’t do it,
They got him tied up in the White House
Those legacy providers-
Got him shackled at the ankles.
So come on people,
We gotta do it.

Now, here’s the problem as I see it,
We got peak-oil loomin,
That means half of its gone,
We got global warming coming on,
We gotta frozen economy,
Politicians can’t tell you and me
So come on people,
We gotta do it.

Our President can’t do it,
They got him tied up in the White House
Those legacy providers-
Got him shackled at the ankles.
So come on people,
We gotta do it.

See, there ain’t nothing to recover
All the jobs is gone to China
Only a massive swing to green
Could help us to recover.
Now, that ain’t gonna happen,
Cause, that’s too radical,
Old system won’t allow it,
It’s gotta be the people’s move –

Come on people
Get in sync with nature
Push our vision to the future,
It was us that built this nation
So let’s be the change we wanna see.

Hello all, just a quick inquiry.

I thought peak oil means that the amount remaining in the ground requires more energy to extract than the energy being extracted… vs. peak oil meaning that we are halfway through the worlds supply. is this not the case?

I’m not a fan. Tend to agree with George Marshall: http://www.guardian.co.uk/environment/cif-green/2010/oct/27/london-futures-climate-change-exhibition