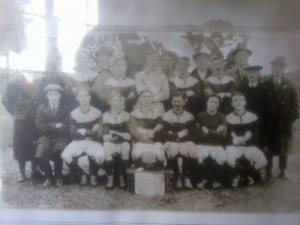 The Fox pub's football team, circa 1911. Apologies for the quality of the photo, Peter Cross took it on his phone!

My thanks to Peter Cross for sending this in.  Here is a fascinating taste of how football worked before the age of cheap oil. Football today is hard to imagine without its huge carbon footprint and its dependence on dazzlingly sophisticated communications technology.  Man Utd’s climate change-aware defender Rio Ferdinand, recently said “we travel week in week out. We’re in France one week, Spain the next. How do you get around that? I’m yet to be told – unless you can enlighten me?”  Well here’s a story that could contribute to that conversation.

This is a picture of the football team of the Fox public house in Felpham near Bognor Regis, in West Sussex in 1911.  In front of the team is a football on top of a box.  The box was used to transport a pigeon to away matches.  According to Peter, at the end of the game the result was written on a small piece of paper and sent by pigeon to the Bognor Regis Observer.  A strategy that Rio might like to adopt as he attempts to interest Man Utd in reducing their carbon footprint?

I think this was meant to be light hearted but i’m addressing the serious sub text;

As a carbon accountant I’m aware of the footprint of our ICT infrastructure but i’d strongly argue that we should localise most things but access to and the sharing of knowledge through ICT must be better globalised.

There is no response to the critique that Transition-ers are selling a regressionary story if our images and stories about the future don’t have a healthy balance between past, present and future technologies. Apologies Rob, but I’d argue (having read most posts) that this balance isn’t struck at transitionculture.

As the pendulum swings back from globalization, large scale events, large scale consumption, high tech this and that etc towards more localised economies, appropriate tech, appropriate scale, appropriate consumption, I really hope we remember that globalisation and high tech aren’t inherently wrong or bad. the problem is is our lack of collective ability to understand when these things are good for us and appropriate, it is our inability to properly define the boundaries. The TV and Car are messmerisingly good technologies if only we knew how and when to use them. My fear is that we will fail in the same way as the pendulum swings back.

On another note, i’d like to talk about events. You say “Football today is hard to imagine without its huge carbon footprint”

The Transition Conference only has a smaller footprint than a national football match because less people go. i.e. on CO2e per person watching / attending basis TC is likely to be more carbon intensive. Scale is all-important here, again. Irrespective of the low carbon materials and services that go into the TC 90% to 95% of the carbon burden is travel.

But travel to these events is amazingly important as part of our deep seated need for social interaction with like minded people, which is essential as much for Transition fans as it is for football fans (me not being one of them).

So in a serious response to reducing emissions from football Rio might want to increase the value of more regionalised leagues for fans to travel to in smaller more appropriate quantities and experience matches, with less fixtures per season, incentives for people-powered travel, perhaps annual carbon travel budgets for individuals, more collective travel to said events, more and better ICT coverage (no pigeons) of regional, national and international matches so fans don’t need to travel, more collective viewing down the pub etc etc…

You are right it was light hearted. Pretty ingenious though eh?

There was a time, not that long ago, when it used to take six weeks or more on a ship to get the English cricket team to Australia for the test series. News reports were wired back for the national papers taking days to reach their audience. Now we watch the action as it happens and a replacement player can be summoned and sent in a few days. What’s the carbon footprint of that?

We even consider building air conditioned football stadiums in countries far too hot for World Cup football competitions a good thing, or at least the majority of FIFA do. Nothing like using up our precious fossil fuels as quick as we can.