« Back to the Old House: meetings with remarkable walls
A whistle-stop tour of Belgium and the Netherlands »

A Tale of Two Paints 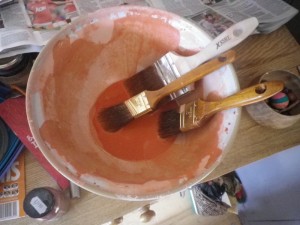 I loved Ed Mitchell’s post over on the Transition Network site as part of the ‘fantastic ‘social reporters’ project.  There are 12 ‘social reporters’ around the UK who will be blogging in a rota, producing one blog post every day, on a subject set by a guest editor at the beginning of the week.  Ed’s was called “A liminal song of thanks”, and in it he wrote:

“That’s why we’re staying up late, working on personal time, finding friends who don’t want to support this future, even though it seems unavoidable, and jamming with them, making it up as we go, sharing our personal stories, openly, our successes, our failures, our hopes, our dreams, our loves. Our vegetables. Wrestling with content management systems that aren’t as perfect as our hopes”.

Beautiful.  No mention of making your own paint out of cheese though.  So I thought I’d better put that right this morning.

In my kitchen is a big wall in need of painting.  One of those walls in need of painting that was actually in need of painting from the day you moved into the house but you get so used to its ‘in need of painting’ look that you never actually get round to painting it.  I’m sure you have one of those.  So anyway, amazingly, I was, one day recently, seized with the reckless notion that perhaps it might be time to actually paint it (I know… wild, impetuous creature that I am).  When I lived in Ireland, at The Hollies Centre for Practical Sustainability, the wonderful Ulrike Riedmuller was a great maker of her own paints, blends of pigments, chalk, lime, and all kinds of weird and wonderful things.  I have used all manner of shop-bought natural paints, but this time I wanted to do something a bit more experimental.

I rang Ulrike, she said just mix fromage frais (yes, the stuff you just buy in the shops which is like a low fat creme fraiche, the stuff sold as ‘quark’ is pretty much the same thing) with pigment.  Slap it on the wall.  End of.  That did sound just a little too experimental to me (although those super-expensive ‘traditional casein paints’ are basically just that).  I also did a bit of looking around and found this short film on YouTube.  Just in case you had been wondering why Cher has been so low profile recently, it’ll probably be because she would appear to have started her own DIY natural paints business.  Check this out: https://youtu.be/nb2pE6Ge-0Q. 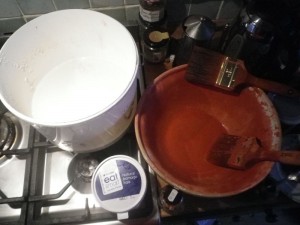 So we thought we’d give that a go.  I had some lime putty in the garage, and some pigments left over from something else, and managed to find some fromage frais in Totnes.  Mixed a text batch, painted it on the wall, next morning when it was dry, it was amazing… no dusting, rub it, nothing comes off.  Hey, I like this, I thought.  So this weekend we mixed two coats and put them on.  I have to say, I’m converted.

If you are thinking Dulux matt emusion, you would, it is fair to say, be a bit disappointed.  Like the cheese shop owner in Monty Python’s famous ‘Cheese Shop Sketch’ would have said, “it’s a little runny sir”.  It’s more cream than cheese, if you like.  It’s not an opaque thick paint, rather something that needs to build up in a few layers. 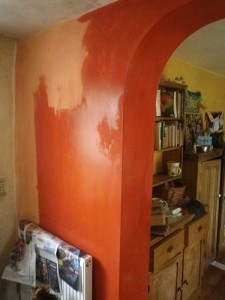 However, that building up in layers is something that gives more of a depth, a sheen, than a single thick coat.  I think also it needs to go on a base of lighter colours, you couldn’t paint one coat onto a dark blue wall and expect to cover the blue.  Anyway, I think it’s great.

Yesterday I gave a talk at the Interrogate Festival at Dartington Hall, and had been asked to do a 12-minute ‘provocation’ on the theme of social justice.  Mine was on the idea that the relocalisation of economies was a key pathway to a more equitable world.  With “here’s one I did earlier” flash of brilliance that would not have been possible in the days when you had to take photos on slide film and then wait 10 days for them to be mailed back from the processing lab only to find most of the pictures you took were crap, I was able to show them pictures of my still-drying kitchen walls.

“Think”, I told the surprisingly-perky-for-10.30am-on-a-Sunday-morning audience, “of two kinds of paints as allegories for two kinds of economy.  A tin of, say, Dulux, is the product of the petrochemical industry, a complex chemical cocktail you allow into your home to make you feel queasy while using it and then allow to offgas for weeks after application.  It is designed for centralised supply chains, contains high “paint miles” which can be traced back to distant oil fields, and creates big problems in terms of disposal.  It embodies the kind of economy that the end of the age of cheap oil will consign to the great dustbin of history, and the kind to which we desperately need to build an alternative”.

“Then there’s my homemade paint.  The fromage frais could easily be made locally (mine, I’m ashamed to say came from the supermarket, but I could have made it myself if I were really keen).  So could the lime and the pigments.  Or the pigments could have been made locally by a pigment nerd who sought out the best different colours the subsoils of the region had to offer, and dried them and ground them and sold them.  Therein is an economy that shares ideas with others, but which, where possible,  seeks to create local livelihoods and business opportunities where possible.  These kinds of paints work best on natural finishes, clay plasters, lime plasters, cob walls, rather than plasterboard and concrete block.  They are therefore key to the buildings of the future where once again we build using what we have to hand, creating healthy, breathable, highly energy efficient, vernacular homes.   They therefore combine the best of the old with the best of the new beautifully.  They are a paint for the future”.

Well actually I didn’t say all that, but I wish I had.  I did show them the slide, and make that point in brief, but I wish I had let myself get this bit more carried away.  I should have rallied the throng with these words: “Reclaim the paint on your walls!  Rediscover the joy of mixing your own!  Don’t just storm the barricades, paint them a nice shade of red ochre as you go past!  You have nothing to lose but that horrible taste in your mouth that keep repeating on your for a couple of days after you’ve painted with an industrial paint!”.

I never realised there was so much power in paint.  I’m all a-quiver.  The kitchen looks nice too.

Wow, you can send paint by text now (paragraph 6 above). Whatever next?
Mike.

This is great and wonderful! I do love the idea of reclaiming such small and basic things as paint back for ourselves. Thank you so much for sharing. It’s inspiring.

…and… are there resources for making a paint that will work for those of us who do live in homes with drywall or concrete, with late-and-industrial paint over said walls? I’m of the large number (majority?) of people who don’t have the privilege or resources to buy land and build a cob house or buy and retrofit a crumbling victorian with plaster-on-lath walls.