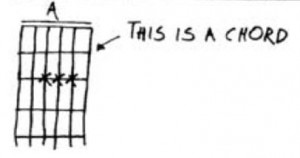 I seem to have done rather a lot of talks in schools recently.  I did one last week which included showing clips from the film ‘In Transition 2.0’ and talking about all kinds of stories from Transition initiatives around the world.  It was also the first one I have done yet where no-one was texting at the back of the room, which was a nice change (might one assured way to raise educational standards in schools be to make sure none of them have a mobile phone signal?  Bit radical.)  One of the questions I was asked was about how Transition got started, a question I am asked with alarming regularity still).  It got me thinking about the whole question of getting things started.

Speaking to students afterwards, I got the sense that there is a lot of nervousness about just starting things.  They might fail, and leave you looking ridiculous.  Or rather, that there is a sense that you have to know something will work before you start it.  Transition is living evidence that that isn’t the case.

Thinking about it on my way home on a packed train to Reading, I thought that the initiating of Transition, back in 2005/6, required, in hindsight, a particular recipe, of which I, and those others involved at that stage, were largely unconscious at the time:

As I stood there answering the students’ questions, I was reminded of one of the finest examples of all this, especially the punk ‘do it yourself’ bit, which I first saw aged 14 and which partly shaped my attitude to life ever since.

It comes from one of the earliest, and most classic, punk fanzines, called ‘Sniffin’ Glue’.  Fanzines, for any of you too young to remember such things, were the blogs of 30 years ago, where boys (mostly) would pour out appallingly self-indulgent stuff about the bands they liked, haircuts, politics, their favourite films and so on, on crap typewriters, cut it up with pictures and stuff, photocopy it, and then sell them out of sweaty hands, largely at gigs.  “Wanna buy a fanzine?” became a phrase one would hear many times during an evening at a gig, from a bespectacled youth with a laden satchel over his shoulder. 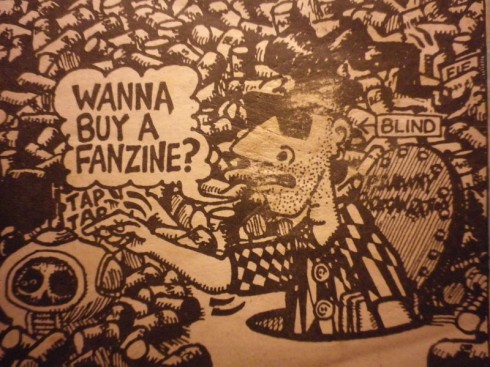 I loved them.  Indeed I still have quite a few of them.  Titles such as ‘Vague’, ‘Communication Blur’, ‘Hungry Beat’, ‘Attack on Bzag’, and one of my favourites, “Are you scared to get happy?”  They were raw, passionate, and disposable.  They also, on occasion, contained some of the best writing I have read, still to this day.  Anyway, back to ‘Sniffin’ Glue’.  I was a bit young for it really, as I was only 9 when it was published, but this particular page became so celebrated that it was often reprinted in others.  Here it is. 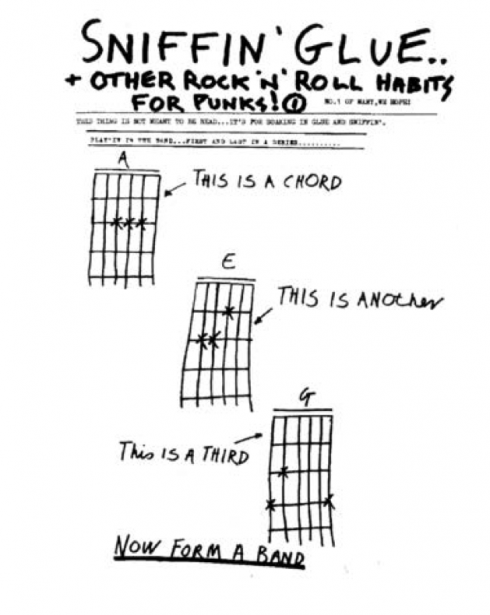 What I love about it is that it captures the spirit that for me shone through punk.  Whilst many may remember it for silly hair dos, crap records and people spitting at each other, for me it was always about ‘do it yourself’.  Don’t like the music press?  Start a fanzine. Don’t like the records you’re hearing?  Start your own label.  Don’t like the clothes on sale?  Make your own.

In relation to my checklist above, this page from Sniffin’ Glue captures that.  Have a go.  Three chords are enough to get you started, you’ll pick up some more once you get underway.  Your passion, your love of music, your energy, is far more important than your technical prowess.  I saw bands where there were rarely more than 3 chords on show, but somehow it all just held together, there was such a focused determination, such a LOVE for what they were doing.  I love all that, me.

For me, Transition at the beginning was 3 chords, a fine tune in our hearts, and a desire to try and see if we could play it.  It’s a useful metaphor for the students I was talking to when they asked me how they might start Transition where they live.  In terms of Transition, we could say, perhaps, “here are 3 Transition ingredients, now form a group”.  Perhaps those 3 ingredients, the key ones to get you started, are Coming together as groups, Forming an initiating group and Running effective meetings (ok yes, well I know that is actually two ingredients and one tool, if you want to be pedantic about it).  They’re a pretty potent initial few to get you started.

They are enough to get you moving, laying foundations, up and doing something instead of wishing someone else would do something.  They have you starting something, building some solid foundations, and starting to create a sense that something is happening that will bring in others, and that will spur you to start drawing in more ingredients to what you are doing.  You will draw in new ingredients when you feel you need them, you will have created something that has the energy of self-organisation about it.  This is why the Transition:Launch training focuses on the first few ingredients, rather than the entire journey.  Start at the beginning and grow out from there.

Of course in reality it is a bit more complex than that, but for me what matters is a sense of what is possible.  The idea that you need to become a virtuoso musician before you can form a band is likely to put 99% of people off the idea that they can create music at all.  The idea that you just need to master 3 chords and then you can get started is so much more empowering and enriching.  In the same way, the idea that you would need to study facilitation, permaculture, Transition, change management, planning, and so on, to some dazzlingly competent level before you can start a Transition initiative, would mean only about 3 people would get going with it.   So, instead, here are three ingredients, now form a Transition initiative.  Feels like the best advice I can come up with for a room full of enthused teenagers.

Brilliant!
What a splendid insight; I love it

I’ll take this + a couple of other things and I reckon it’s about spot on. 🙂

“Begin at the beginning,” the King said gravely, “and go on till you come to the end: then stop.”

Great post, really enjoyed reading that. It is so sad that today everything has to succeed or someone has to pay dearly for it. Experimentation is important if we are to change things, and being allowed to fail is part and parcel of that.

Hate to be a pedant Rob, but the old ‘This is a chord’ drawing was originally from ‘Sideburns’ fanzine in Jan 77, from whence Sniffin Glue lifted it shortly afterwards…

But then plagiarism (or is that ‘going viral’ in this post-post-post-modern era???) and idea sharing was always an important part of the old ‘DIY Not EMI’ punk sensibility which I personally found much more inspiring and life-defining than the daft haircuts and leather jacket stereotypes…

Another rallying cry of the era was ‘It was easy, it was cheap, go and do it!’ from the self-financed first single by The Desperate Bicycles which laid bare and demystified the process of making your own record, complete with a breakdown of recording, production and distribution costs of the record published as the record sleeve cover art. Indeed a mini ‘ingredients’ manifesto published way back in 1977!!!

My right brain and non-linear orientation is inspired by this post. Thanks Rob for your story…for being genuinely organic!

Well spotted Graham. A deliberate mistake of course to see if any of the original punks among those reading it would spot it (ahem). ‘Sideburns’ was a crap name for a fanzine anyway.

How about an ‘initiative classes’ (like a junior version of business school without the corporate overtone)?! In dire economic times kids need hope and empowerment, confidence to try and courage to fail.
The sooner failure is seen as learning and not shameful the sooner more people will dare to dream, as you have done.

A great analogy, or is it metaphor? Of course blues and rock and roll revolved around 3 chords too, but punk did generally stick more truly to the simple trinity. Looking at the vast spread of creative outcomes we’ve created throughout society from using just binary patterns what might 3 inputs produce!

Another thought: these kids at your talks that seem to be texting, maybe they are tweeting your words as they hear them to the world….?

That’s a beautiful thought Andrew. One I will try to hold in mind at future events with schools. I will try to imagine that they are sending Transition wisdom out excitedly through their huge social networks, inspiring a new generation with exhilarating possibilities. The thought they might be texting “Hvng to listen 2 sum bigeared looser talking bollocks. Lol” won’t enter my mind even once.

Always good to think positive Rob, I remember about 12 years ago leaving a bag containing about £100 quids worth of Sale or Return Permaculture books and magazines on an underground train in south London. I’ve always managed to convince myself that they were found by somebody who found them life-changing rather than by a cleaner who chucked them all in the bin…