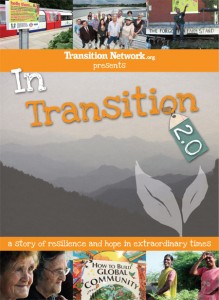 Here is a great review of ‘In Transition 2.o’.  You can now order the DVD here, orders start shipping at the end of this week!

Having been involved in script writing and producing the trailer for In Transition 2.0, you could say this review will be biased. You’d be right. And my bias comes from the belief that this film is a powerful call to arms for a rapid evolution in the way we live and work together as it shows how collectively, we can effect extraordinary change.

In Transition 2.0 takes the viewer through an emotional journey that effectively charts the evolution of the movement from its humble origins in Kinsale, Ireland, to an international movement that now attracts the attention of politicians and world leaders.  There has been a remarkable evolution in the Transition movement over the last four years, since the first film, In Transition 1.0, was released. In Transition 2.0 has a much deeper emotional thread running through and on several occasions I was moved to tears.

[You can read the review in full here].