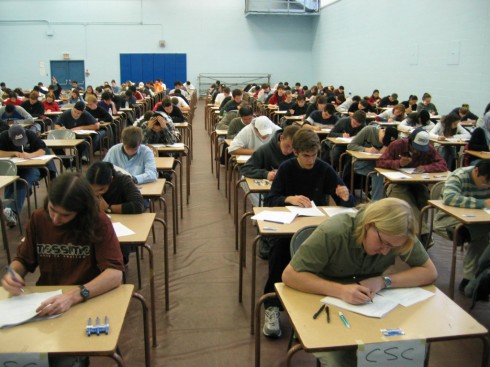 Here is a great story that appeared in the most recent ‘Round-up of what’s happening in Transition’ which you may have missed, and so deserves a retelling. Transition Network’s Ben Brangwyn begins the story:

“About 3 years ago, Transition Network was contacted by one of the UK examination boards requesting our permission for an exam question about Transition to appear in the national examinations for “Global Citizenship”. We were sworn to secrecy and had to sign several official-looking documents. We were a bit surprised with this development but, knowing the complexities of the UK curriculums for schools and how slowly that area works, we didn’t think we’d hear any more about it. However, two years later a small number of schools got in contact with us to arrange visits to Totnes and ask some pointed questions about the whole Transition thing. And then, last month, we heard from someone involved in the murky world of examination boards….”

So over now to that person, Kevin Walker, a Citizenship Teacher living in Devon, who sent Transition Network the following:

“This summer’s A-level exam papers in England, Wales & Northern Ireland included questions on the Transition Movement. The Global Citizenship unit of the A-level in Citizenship Studies included two questions, the first focused on the applicability of the Transition model to the student’s own community and the second asked the student to consider the relative global impact of community based initiatives in contrast to governmental action.

Students were informed in advance of the topic area but not the specific questions so they had a chance to research and discuss the topic beforehand. Their answers demonstrated a genuine concern regarding the impact of climate change and some knowledge of the concept of peak oil but most knew little about the Transition movement until they undertook their research. This often revealed local initiatives of which they were generally unaware and in a few cases it led onto their own involvement. In all cases these 17-18 year olds engaged critically with the issues and reflected deeply on the role of the active global citizens which they are becoming.

Each year different topics of contemporary relevance are featured and increasing numbers of students are opting to take this qualification. Sadly although the current government pays lip service to the importance of preparing students to be responsible citizens by putting renewed emphasis on traditional subjects they have in effect downgraded the importance of Citizenship as a distinct subject in the curriculum. Hopefully more schools will continue to respond to the concerns of their students who will have to face the consequences of the inaction and lack of vision of their elders”.

The question arises of course whether, in the same way that studying certain poets at A-level can extinguish any enthusiasm for them in later life, this may have just put a generation off Transition!  Hopefully not…  And so finally to those questions.  Students sitting the paper were asked the following:

We hosted a field trip from Shelfield Community Academy in Walsall early in the summer. They were researching for their Citizenship Alevel. They had to pay for much of it themselves and the teachers took the time unpaid. The seemed to really like it. The experience moved me a lot. They had identified a ‘Transition desert’ in the Midlands, hence they came here (Totnes) to study it. Another thing they identified was how everybody they met was so proud to be from Totnes whereas whenever they said where they came from they seemed to be embarrassed or apologetic. The day almost turned into a coaching session on how to be proud of where you come from. In their case a place with great heritage as the leather workshop of Britain. I hope they all got straight As!

Citizenship seems like an obvious place to get Transition into the mainstream education. So does economics, as we are seeing relocalisation beginning to feature in some economics courses. Sustainability and Geography have always been the obvious subjects to look at but maybe we are seeing potential for deeper interest and application in citizenship and economics.

Thanks so much for sharing this.
I have a daughter in year 13 at college in Blackburn, studying Geography A Level, and to me, this curriculum link provides the perfect answer to bring home the virtues of The Transition Initiative and vital relevance to a key generation, through their Education, whereas otherwise they may have lacked connection with the Transition model.
Thanks.

Very good stuff indeed!
I teach A Level Geography and I always get Transition and peak oil into my lessons. We look at Transition Towns via several topics including ‘technological fix?’ (not my ‘?’), ‘energy security’, and ‘bridging the development gap’.
For most of these students, this is the first they’ve heard about Transition or even peak oil. In fact I’m running a class tomorrow with a blog post task called ‘The Trouble with Oil’ http://blographyvarndeancollege.wordpress.com/2012/09/10/the-trouble-with-oil-and-other-fossil-fuels/
This is making me think I should be teaching Citizenship as well . . .