« Might Costa’s withdrawal from Totnes signal the beginning of the end for our collective love affair with brands?
An October Round-up of What’s Happening out in the World of Transition »

Ode to a fallen oak 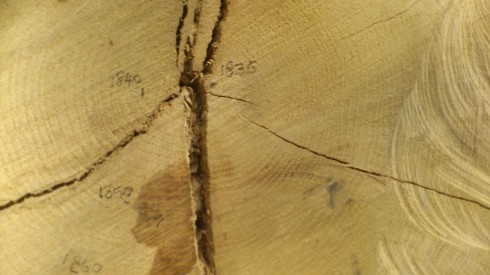 I was out for a bike ride with my 10 year old last weekend, and on the cycle path, a large oak tree had come down in a recent storm, blocking the whole path.  The middle section had been removed so the path could be used, but the rest of the tree was still in place on both sides of the path.  On one side, the big cut trunk was at head height, and was an arresting site as you cycled past it.  What was particularly arresting was that it had become the inspiration for some delightful creativity, a real celebration of the life of this huge and beautiful tree.

Someone had written a poem ‘Ode to an Oak’, and fixed it onto the cut surface.  Here it is, if you click on the photo it will enlarge: 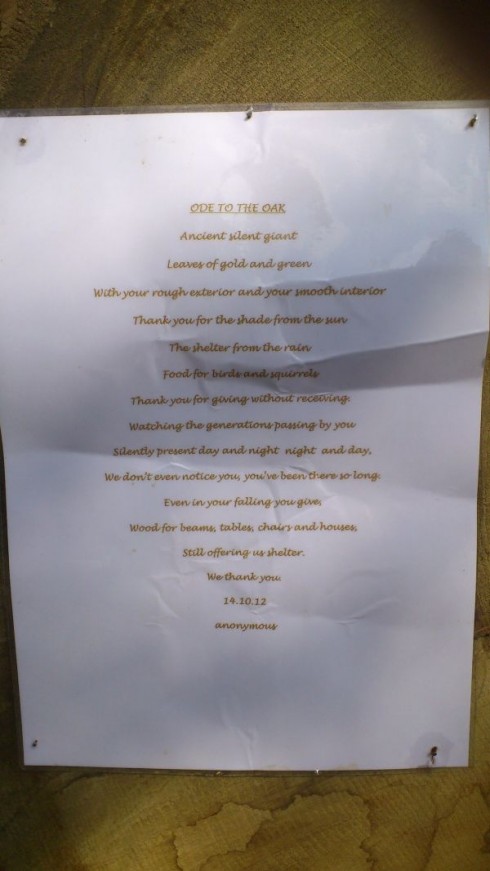 The other thing, which at first glance was hard to see, was that someone had patiently stood and counted back through the rings, writing key dates as it made its way back through the tree’s life, all the way back to 1835 when it first emerged as a young sapling. 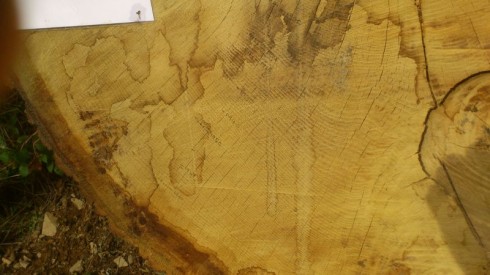 It led to some great conversations with my son about “you were born here”, “I was born here”, “your grandma was born here”, “this is when the First World War was” and so on.  It was like the tree’s autobiography laid bare, an intimate glimpse into the history of that small corner of the world.  It was such a simple thing to do, but it felt like a real honouring of the tree.  We spent quite a while by the tree, looking at how it had grown at different speeds at different times, why that might be, why the wood was less dense at the edges, how big the tree must have been at different times. 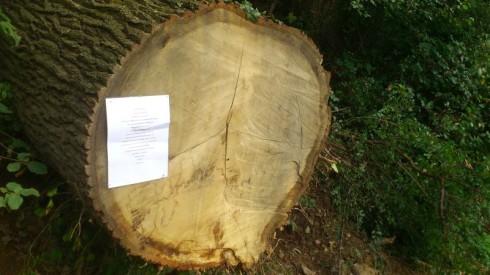 For that short time, we were gathered in celebration of the life of a quiet, graceful sentinel of local life, a distinguished local resident who had done so much to add to the quality of life of the local community.  We were able to celebrate her beginnings, the strong sapling she became, and the sturdy pillar of the local ecosystem that she became, supporting many hundreds of local species, and building soil and locking up carbon to benefit future generations.  It was a passing that was appreciated and honoured, just as it should be.

Thank you Rob. A great story. It is so sad when they fall but here we have a celebration. I remember the devastation after the storm in l987 in the south east where I lived then.

In a week when trees will fall in great storms and we learn of the danger to the Ash this is wonderful reminder of how important and special trees are to all of us. It is also a lovely example of ‘found art’. Thank you for sharing it.

As Western Australia continues to use laws to plunder the ancient forests for paultry gain,
but most significant loss of habitat including origins of endangered species, both identified, and those that may be extinct before they have been identified.
ROB, your tree has the dignity of falling as a way to complete her life cycle.
Our ancients are not treated with that same respect..
There might once have been one singular cloud of mist around the globe,
but condensed it to one location – like the USA
and you have one massive storm..
I feel that the placement or loss of placement of trees has a lot of influence in such matters..

I wonder whether we will honour the ash trees as they too fall… in number!

Thank you Rob. What better way to start the week?
Here in italian: http://transitionitalia.wordpress.com/2012/10/29/ode-a-una-quercia-caduta/
Cheers.
Max

Titled ‘Good Oak’ it’s about sawing through an oak tree that’s dead after being struck by lightning, and is now being cut for firewood. It’s an incredible bit of writing, one of the finest I’ve ever read. Can’t recommend it highly enough (and the whole book…).

Thank you for this lovely “Ode to a fallen oak” and the reference from your reader Jonathan Smith to “Aldo Leopold’s ‘Sand County Almanac”
Nice linkage.

Trees have specific identity and are individuals to respect and celebrate. They are the means to acquire a new level of consciousness, a new paradigm. They Bind us to the past and will be present in the future. Thanks for sharing this beautiful story Rob!

So touching, beautiful and thoughtful. Thanks Rob.

It reminds me of the time I was at the still (just) growing ancient Fortingall Yew near Pitlochry in Scotland in 2005 and for the millennium they had made a path which stretched out and marked the events that had happened during its life. It was sobering and jaw dropping to read back along the path and reaching the building of the pyramids!