« Fiona Ward introduces the REconomy Project
What happens when local authorities ask “what if the economic situation doesn’t get better?” » 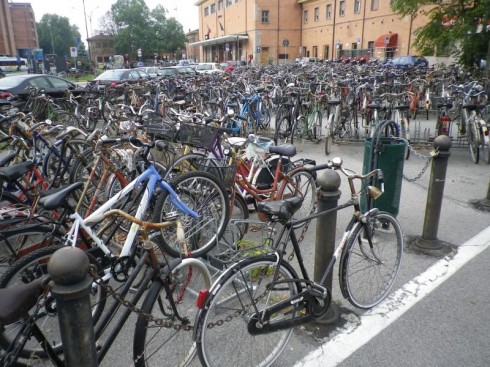 2011 was the first year for over 40 years that more new bicycles were sold than cars in Italy.

Someone once said that things are “getting better and better, and worse and worse, faster and faster, all at the same time” or something like that.  For this new book I’m doing I have a short section that lists some of the trends in which we can start to see the seeds of a Transition future already emerging around us.  I have gathered some, I wonder if you can think of any more that you’ve come across that I can add to this list?  Any you’ve spotted?  Any ideas or suggestions very welcome.  Thanks.  Here are mine:

The rising cost of fuel has meant that sales at out of town stores fell by 12% compared to comparable stores in town (ref) • 2011 was the first year when, in Italy, sales of new bicycles outstripped sales of new cars for over 40 years (ref) • The Scottish government is considering introducing legislation to presume in favour of the use of land owned by public bodies and private landowners for people to grow food • number of bicycles in the UK has increased 18% since 2007, compared with a slight decline for cars/taxis and at 20% fall for motorcycles (ref) • the internet and social media enable the spreading of ideas and information almost instantaneously, with a profound impact on how social change and movements can happen  • 40 million more journeys were made by bicycle in the UK in 2012 than in 2010  • A 2011 survey found that a third of UK adults planned to grow the majority of their food that summer (ref)

Any more?  You could tweet them too, using the hashtag #transitiontrends.

Don’t forget this: Siemens, the largest engineering conglomerate in Europe, announced in 2011 that following the German government’s decision to phase out nuclear power by 2022, it would stop building nuclear power plants anywhere in the world.
Although undoubedly there will be an increasingly amount of good news as these, there is other aspect of the transition that does not seem healthy, I mean a need for denial of everything bad and dramatic news, issues and facts forced by the fact of having less and less energy and raw materials in general. There are also a lot of statistics in the other hand, including the growing number of ecological disasters, social conflicts, urban protests clashes and resource wars that are taking place worldwide right now. If we do not want to lose track of reality we must look at the phenomenon completely, from a holistic view. The transition has many positive aspects, but also is not a fairytale for millions of people

Genetically modified foods are now on the radar of the mainstream population: 46% of the public wants to label them in California (the state where nearly half of U.S. fruits & vegetables are grown, and nearly 100% of some crops)

California is now implementing one of the U.S.’s first-ever greenhouse gas laws.

The U.S. White House has an organic vegetable garden on its grounds.

Los Angeles-based Backward Beekeepers is hugely popular and now forming branches in other cities. (“Backwards” because they rely on observation and natural practices to keep bees thriving rather than pesticides, chemicals, or treatments of any kind)

The number of miles driven in the US is decreasing.
http://www.advisorperspectives.com/dshort/updates/DOT-Miles-Driven.php

I think some of the vocabulary you’ve come up with, the word Resilience in particular is popping up everywhere and even re-skilling and others will have a big influence in framing the debate.

Sorry that this is anecdotal, but there is a clearly visible decrease in car density in Tokyo. The roads are steadily emptying of cars. This has been apparent for a while, and the disinterest in car ownership among young people is something discussed in the news. There was a particularly dramatic upswing in bicycle usage following the March 11, 2011 earthquake, when millions of people were stranded by the paralyzed transportation system and had to walk hours to get home. I have been trying to find actual numbers about these shifts, but have found good, up-to-date studies/documentation yet. Will post if I can find…

How many sociology departments are doing studies of community based projects for energy, local growing and marketing projects etc? Apart from your own, Rob?

This is an interesting study which may point you in the direction of some trends such as crowdsourcing http://www.bmwguggenheimlab.org/press/current-press-release

I’m loving your project and will definitely be following it!

As for a trend to watch: Urban/suburban chicken keeping and backyard farming are on the rise as people try to reconnect with their food. In 2011, our approximately 9000 sq./ft. suburban lot was able to produce the retail equivalent of over $650 in pesticide/chemical fertilizer-free vegetables for our family. This was all accomplished using zero fossil fuels in the production, harvest, packaging, and distribution of that food, plus saving us an estimate 20% a month on our food budget. Cool, huh?

The widespread pessimism caused by psychologistic biodefaitism is a serious problem for the transition movement. It is important to spread information about science proving that pessimism wrong. For instance, although there are cases where identical twins raised separately behave very similarily, there is also cases where the identical twins behave very differently. This discrepancy falsifies any claims of a generalizable “nature/nurture ratio” or fixed “learning windows”. As shown in metastudies by Kurt Fischer and Christina Hinton in “Mind, Brain and Education”, the key to miraculous recoveries after brain damage is a tolerant environment. Why it is? Consider the fact that intolerance causes social pressure to blame on others and justify one’s own actions. Blaming on others leads to paralyzed action both by waiting for others to do something and by generalization to one’s own behavior in the form of blaming on “instincts” or things like that. Justification of course paralyzes self-correction by removing any insight that something has to be corrected. So anything that causes social pressure to blame and justify is adverse to transition. And since decisions top-down are practiced through threat of punishment (which obviously creates social pressure to blame and justify), the opposite way (bottom-up) is the real solution. But for it to be feasible, information about science debunking psychologistic biodefaitism must be widely spread.

This article ( http://www.bizjournals.com/bizjournals/blog/seat2B/2012/10/government-offers-air-travel-report.html?page=all ) refers to a US report featuring lots of evidence about the contraction of US domestic flights.

The report itself is here: http://www.oig.dot.gov/sites/dot/files/Aviation%20Industry%20Performance%5E9-24-12.pdf.

All attributed to increasing energy costs.

What is ‘biodefaitism’? According to a Google search, you are the only person in the world to have used this word.

I don’t want to speak for Martin, but from the context, I think defeatism is meant. I’ll let Martin respond if this is correct or not, but I would like to comment on his point. There are voices that basically say it is too late, not only are the trajectories of climate change, etc., too firmly entrenched to be altered, but the logic of markets (the “impossibility” of leaving all those carbon based fuels in the ground unsold) means that humans must fail take effective action.

My objection to this line of argument is that it seems to ignore the very thing that is at the heart of ecological modes of thinking — respect for systems complexity. The complexity of living systems, the multiplicity of feedback loops, means that we cannot make detailed predictions, but only outline ranges of future scenarios. And when one of the key elements of the system is human consciousness and will, which we know are highly variable, it seems methodologically very dicey to try to come up with definitive predictions — with happy or unhappy outcomes — for global biosystems. Such predictions are best understood as expressions of personal or cultural despair which, and here I very much agree with Martin, undermine action and increase the probability of the very negative outcomes they lament.

We need to analyze and act, act and analyze, in effect feeling our way forward. There is no grand blueprint for us to follow, which is why efforts to pool data and evidence like this one are so important.

I too, thought it was a typo, but exactly the same word appears here, from the same author:

On closer examination, it appears that the whole post has been cut & pasted, along with the typo, if is one.

Just my insecurity, really, thinking that there was a whole new concept/movement/breakthrough (biodefaitism) that I was unaware of.

My own view is that the current price mechanism, which will inevitably reflect the underlying decrease in net energy available, will naturally force behaviour changes in most of the world population, with a lot of moaning and grumbling until the penny drops. Clear examples are cited in the list above – e.g. fewer miles flown in the US. My hope is that the squeeze occurs slowly enough to allow adaptation, and my fear is that it will be a ‘cliff’ over which we will tumble into chaos.

With “biodefaitism” I mean claims based on evolutionary psychology/computational theory of mind claiming that people cannot change to rational behavior. Yes, I use the term pejoratively since I do not believe in evolutionary psychology/computational theory of mind. The concept that it is too late because of ecological feedback loops is what I (admittedly somewhat imprecisely) call ecotoolateism. Imprecisely, since it will “only” cause massive ecological change anyway (as opposed to rendering Earth as inhospitable as Venus or Mars, which it will not). I recommend the following pages on Pure science Wiki: “Brain”, “Self-organization”, “Inheritance of acquired characteristics”, “Moderating the Gaia/Medea debate” and “How to avoid hoaxes in science”.

Thanks for sorting that out.

If you are interested in reading it on Pure science Wiki, the link is http://purescience.wikia.com