Ice sheets and glaciers are the canaries in the coal mine of climate change.  They are one of the first places where you can see the impacts of the planet’s rising temperatures.  The collapse of the Arctic ice over the last 10 years or so has been widely reported, accelerating way beyond even the worst predictions.  Although we may read about it, and see the odd photograph, it is hard to get a sense of the scale of what is happening. Balog’s work here is vital.  ‘Chasing Ice’ is described on the film’s official website like this:

“Chasing Ice is the story of one man’s mission to change the tide of history by gathering undeniable evidence of climate change. Using time-lapse cameras, his videos compress years into seconds and capture ancient mountains of ice in motion as they disappear at a breathtaking rate”.

In 2005 Balog visited the Arctic to take photos for National Geographic which somehow communicated and captured climate change.  He later said of the trip “I never imagined that you could see glaciers this big disappearing in such a short time”.  He was so moved by the experience, and so convinced that one-off photographs failed to capture what was actually happening, that he set up the Extreme Ice Survey.  He and a team of young scientists and adventurers set up, in Alaska, Greenland and elsewhere, time-lapse cameras focusing on glaciers and ice sheets, and documented them over long periods of time.  The results are extraordinary.  If you generally think of a glacier as a static, fixed object, which would be our experience if we went to visit one, what Balog’s work does is bring them to life. 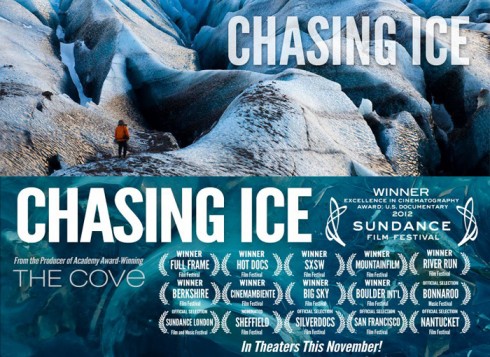 Viewed over a long time period, each ice sheet becomes almost a living, breathing thing.  Swelling and contracting with the seasons as though it were breathing.  We see glaciers deflating like balloons.  We see them crumble and vanish.  We see ice retreating so rapidly that in one case, an ice sheet contracts more in a 10 year period than it had in the previous 100 years.  We see chunks of ice the size of Manhattan, built up over huge spans of history, crumble into the sea over a couple of hours.  It is this that kept me awake most of the night in that hotel room in Oxford (if you look very carefully during the clip of him speaking at TED you can actually see me in a couple of shots which is rather exciting).

This is also Balog’s own story.  He is a man driven to carry out what for him, is the work that most needs to be done at this time in history.  Something history-changing is happening and it needs to be documented.  He puts himself (and his team) through great hardship, including the ongoing saga of his knees which require repeated operations in order to keep him going.  At the end of the film he says “When my daughters look at me 25 to 30 years from now and say “what were you doing when global warming was happening and you guys knew what was coming down the road” I want to be able to say I was doing everything I knew how to do”.  That integrity and commitment shines through this film. 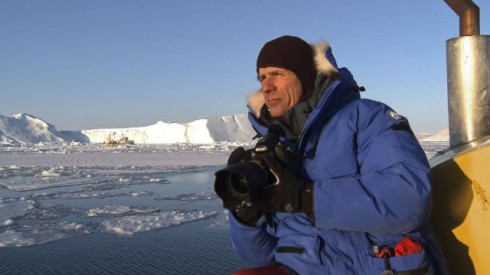 I hope I haven’t made this sound like a depressing film.  I actually found it deeply motivating.  The conversations I was part of after seeing it mostly revolved around whether it is too late to do anything about it.  Balog mentions in a couple of his talks shown here that he believes there is still time to avoid catastrophe, but the question is largely left open, and in many ways it is the defining question of our times.  Alongside this, ‘Chasing Ice’ is perhaps the most beautiful film I have ever seen.  The colours and the sculptural forms he captures in his photos are breathtaking.  One shot, near the end of the film, showing a large lump of ice, illuminated against the background of the night sky, is the most exquisite thing you will see.  It is the film’s juxtapositioning of this breathtaking beauty and the visceral sense of its collapse and fragility is where its power lies.

After a couple of years, post-Copenhagen, of the denigration of climate science and scientists, the fightback appears to be well underway.  Hurricane Sandy, the dreadful situation in Australia and a year of outrageous extreme weather the world over would appear to be making sure of it.  This film will hopefully be a central part of that.  At one point in the film, one interviewee talks about how Balog’s work led to him stopping working for Shell and dedicating his time to fighting climate change.  If this film can be part of a tipping point of helping more people to such realisations that would be fantastic.  Here is a taste of the impact ‘Chasing Ice’ is already having on people:

I can’t recommend it enough.  Part of its skill lies in not pushing an explicit plan of action or way forward from here.  There is no ‘An Inconvenient Truth’-style “what you can do” list at the end, no reference to politics, treaties, policy changes.  It leaves you to start those discussions, both your own internal conversations and with your friends and family.  There’s no pushing the issue away as something that doesn’t concern us.  To see something so beautiful, that we had always assumed to be a permanent feature on this planet, melting before our very eyes, is both traumatic and galvanising.  This is essential viewing, a gem, something really something quite extraordinary.

A special offer for Transition groups

The film’s UK distributor Dogwoof have told us that they have already had a lot of interest from Transition initiatives, and have set up a special offer for a licence to show ‘Chasing Ice’ at a community screening which means it will be half-price (£100).  If you would like to show it, click here and you’ll be able to access a discounted screening fee.

Wow, that 1m43 Youtube clip “Chasing Ice, changing lives” near the end of this piece is powerful enough on its own…

I saw this film at our local theatre two days ago, and it is utterly wonderful. The sheer beauty of the ice fields and glaciers is breathtaking, and just left me in awe at how amazing our planetary system is. The film’s photograhpy is stunning. It is also the best and most compelling visual evidence I have ever seen of the “canary in the cage” effect of climate change. When you watch a lump of ice twice the height and the same area as Manhattan “calve” into the sea, there isn’t much left to say.

I think this needs to become one of the top 10 films to see in Transition Land. Cannot recommend enough.

Sadly the theatre programmes its films quite last miinute so I hadn’t picked up on it to get people there, but believe me, Transition friends, it is one to show our movers, shakers and decision makers.

Ok, just nipped out to see it!

Definitely a powerful film, and one I’d recommend, but for me personally not quite up there with the likes of the Age of Stupid, which affected me more deeply. I’m sure for some people this will be the one though.

It feels a real privilege to be able to just sit and watch such footage, when you consider what went into capturing it.

Chasing Ice is stunningly beautiful, and although I had seen some of Balog’s footage before through my work, one section in particular left me literally open-mouthed in awe, as well as close to tears.

A wonderful, inspired piece of work that may well reach people with its stark, undeniable visual impact in a way that statistics rarely will (and yes, I can confirm that Rob can be spotted therein!)

I agree – an incredible film

Transition Crouch End are screening ‘Chasing Ice’ on February 27th – pay what you can, hope to see you there 🙂

Seats are limited so please let us know you are coming and we’ll reserve you a place.