What’s it like doing a week’s work experience at Transition Network? 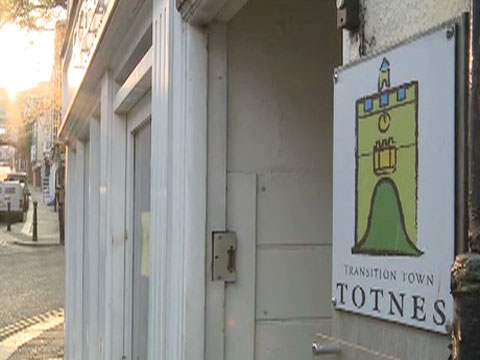 Before Christmas, Transition Network had our first student doing work experience with us.  Oscar Thynne (15), who recently moved from Bradford-on-Avon to Lancaster, was with us for the week and did various things, including helping with the creation of that month’s ‘Round-up of What’s Happening in Transition’.  He just started his own blog, and his first post was a report about his time with us.  Here, in his own words, is how he found the experience, and his reflections on being a part of the team, even just for a few days.

I was lucky enough to witness first hand how the Transition Town Totnes office works during my work experience in 2012. In this post I talk about everything I experienced, from being in an office with two of the co-founders – to working in one of the community gardens and meeting all different types of people. My time there was truly memorable and I hope this post encourages you to look more into a Transition Initiative near you (Transition Network official website: Find an initiative near you). 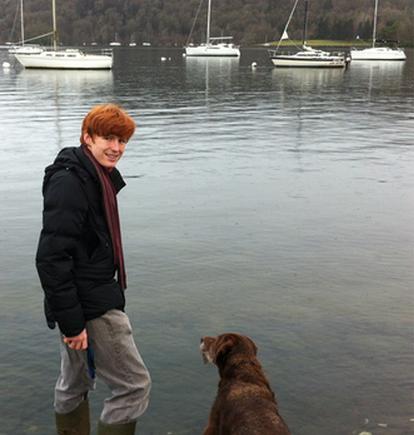 During the week begining the 22nd October 2012, I did my work experience at the Transition Town Totnes Headquarters. I experienced and researched many of their amazing projects that aim to help communities come together, as well as meet and work next to the co-founder Rob Hopkins (desk position terms that is).  I even saw him talk at the ‘Communicate Conference 2012’ and on the same day, to Bristol University students.

If you don’t know much about the Transition movement, it’s website calls itself a “social experiment on a massive scale”. It helps communities that register to take a lead and create local projects ranging from education, food, arts to the environment… everything you could ever imagine.

Being an ‘initiative’ is about being an active community – one that brings neighbours together to work as a team. On the official network website, it states people that have been part of a transition initiative project in some way have said, “as a result of being involved in their local “transition initiative”, they’re happier, their community feels more robust and they have made a lot of new friends.”

My week began as anyone’s work experience would begin; a mixture of nerves and excitement. I knew I would really enjoy my time there, but I was really hoping I wouldn’t ‘muck up’ any of the work. Luckily, I had met my supervisor (the Office manager) a few months prior – back at the planning stages of work experience. She introduced me to the team, who over the course of the week I would work closely. Some people say you know when an organisation is successful when all the staff are all really kind and hard working.

Well, if this is the case (which I believe it to be) I can confirm that Transition Town Totnes is an extremely successful organisation. I couldn’t believe how at home everyone made me feel!  I borrowed a desk and was set my first few tasks. I ended up working closely with Rob’s PA, the Funding Manager and Rob Hopkins himself. However, if I thought it was just going to be work at a desk, I was very wrong.

I was invited by Rob’s PA to attend an ‘Incredible Edible’ session on the Tuesday, which she runs. Please note: Information about these sessions can be found here!  As the day drew to a close, I had met lots of nice people and started work on some pretty fun tasks.On the second day, I went with Rob’s PA to the ‘Incredible Edible’ session.. We left before lunch and the rain had managed to hold off.  As we walked to our destination she explained to me a bit about the project. 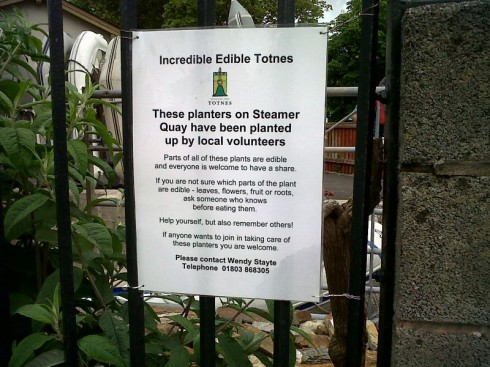 Image from www.transitionculture.org – copyright belongs to them.
‘Incredible Edible’ is a project many Transition initiatives take on and it basically brings a community together to grow plants, mainly vegetables and fruits. Once grown anybody passing by can feel free to take a taste of any fruit or veg that is there for free!

I think it is an amazing idea to not only introduce people to new fruit and vegetables but to the whole idea of bringing people together to work on growing these – truly inspirational. When I went along, I met a student from Switzerland who had read about ‘Incredible Edible’ on the ‘Whats on’ section on the Transition Totnes website. This proves that it is not only local people that come along to these sort of sessions.   This initiative allows you to meet new people you might never have met otherwise.

Monday was my first day, Tuesday I did a practical task, Wednesday a full day of work, Thursday I was out all day with Rob Hopkins and Friday was my last day and it came all too soon.  As well as getting lots of work done, I met a man who was wanting to buy some ‘Totnes Pounds’.  Now this currency is something I had heard of but never seen.  Being able to talk to the person who exchanged the Totnes Pounds was really exciting. The easiest way to explain is by quoting the official Totnes Pound website; ‘A local economy is like a leaky bucket – wealth comes in and as soon as it is spent at a shop or business that has more connections outside Totnes than inside Totnes, that money disappears. That’s the nature of sterling.’< I had never thought about it before but having a Transnational Coorporation (TNC i.e. multi national company like Asda) in your town means the money spent under these terms will be less likely to be fuelled back into the local economy.  After all, any produce bought or any product made is usually from a different country, therefore, they are not using local people/farms as much.  The Totnes Pound was founded in 2007 and now has over 75 stores in the area accepting it. As well as this, many cities and local communities such as; Bristol, Brixton, Cardiff, Lewes and Stroud have decided to introduce this concept.

On the Thursday of my work experience, I attended the Communicate Conference 2012 with Rob Hopkins. The conference was held in Bristol and meant I had a train journey up to Bristol from Totnes with Rob. The first thing I must say is ‘thank you Rob’.  On the train journey we had some great discussions and I recieved lots of good advice from him.  I really didn’t think he would talk to me for as long as he did – he is a busy man after all. Throughout the conference I saw some amazing presentations from many different organisations.  Hopefully, I will be able to touch on some of them in more detail throughout this next year as they really do great work.  Thanks to the Communicate Conference for recording this following video:

After the Conference we had to rush off as Rob was talking at Bristol University.  When we arrived, we had some time to spare so ended up going into a university cafe, having a hot chocolate and a game of pool.  I can’t remember who won but I will always remember that game. One of those experiences you never had planned but was glad happened –  I got to spend some more quality time talking to him and finding out more about what he does.

We moved on to the students, I sat down and listened to a very different speech from the one given earlier.  Mainly because the first had focussed on the future of Transition and the second was more about what Transition does now. The students looked like they gained lots out of it – I certainly did.  Next moment, we were in a taxi and off to the train station, on the train and back in Totnes before you knew it. The day ended and I was exhausted but what an amazing day it had been.

The last day of the work experience was obviously the saddest.  I wished farewell to my new friends in the office (I bought them some truffles as a thank you – from an independent store, of course). I managed to complete two out of the three tasks given for the week.  The October Roundup which I contributed can be seen here.The week and my time with Transition Town Totnes  was over, yet the seed of Transition had only just been planted.  After all, it was being there that inspired me to do this blog.I would like to say ‘thank you’ to everyone from the Transition Office and I hope I will see you all again one day.  I also hope that those who read this post realise how inspiring the Transition Network really is and how being part of the network can positively affect your life..