« “To me it’s almost like magic”: The NE Seattle Tool Library opens for business
A February Round-up of What’s Happening out in the World of Transition » 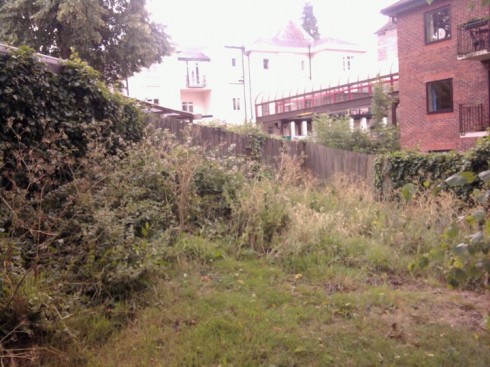 The site before the garden started, a riot of brambles …

Her first task was to find somewhere to grow her ingredients.  She went to a meeting of the “Friends of Westow Park”, her local park, and suggested the idea, which co-incided with cuts to the local Council’s funding and a new openness to ideas, including her idea of a community garden.  Around that time she heard whispers of an emerging Crystal Palace Transition Town and attended their first meeting, which was a screening of ‘The Power of Community’.  This led to a lot of enthusiasm, to new people getting involved, to the ‘Food and Growing’ group of CPTT being formed, then to the project being given permission, getting funding from Capital Growth, and then getting underway.

2012 was the garden’s first year, and even with the dreadful weather that characterised the summer, the garden flourished and was very productive.  They grew a lot of food, salads, herbs, sweet corn and much else besides.  The garden states its aims as being: 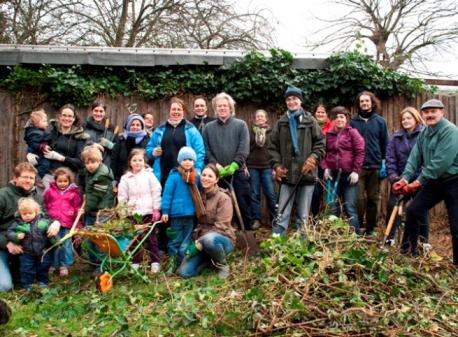 The bramble-clearing-Transition-machine swings into action …

As well as the garden itself, the project has taken on an educational role too, which has included:

Winning the Grow for Gold prize has made a big difference, Rachel told me.  It does take energy every week to mobilise people and keep the momentum up, so that kind of recognition is a huge boost.  It has also served to attract new people to the project.  The garden has grown to become a real hub for Crystal Palace Transition Town, which has acted as a catalyst to inspire other projects which have formed subsequently, all within a 10 minute walk:

This has in turn led to the emergence of a number of social enterprises in the area.  These include:

But perhaps the most important question is … how was Rachel’s Christmas dinner?  I’ll leave her to tell you about that herself:

Finally, here, from Lost in London magazine, is a great piece Rachel wrote about the project, which adds a bit more detail, and includes her tips for anyone else wanting to start a project like this:

Not long ago, my typical weekend would start on a train to get as far out of London as I could get. I now realise that it wasn’t London that I was escaping.

It all started with Christmas dinner. I’d just finished writing a book and was itching to sink my teeth into a new project. My husband came back from the pub with news that our nook, Crystal Palace, was set to become A Transition Town.

We were familiar with Transition Towns as one of our ultimate urban escape plan was to move to Lewes in Sussex. We both love Lewes because when you go there, you’re hit with an instant feeling of community. Everyone’s really friendly. There are loads of independent shops. In most of the cafes and pubs we visited, the food was sourced with care: much of it local, with a story or name attached and seasonal. When we first went there, we didn’t know it was a Transition Town but in hindsight, all the things that made it one were the ingredients that made us want to stay.

The idea of Crystal Palace becoming a Transition Town, of course, had a great appeal and it instantly inspired my next project. There are many aims behind Transition Towns. One of them is for areas to achieve some sort of self-sufficiency. So, I thought I’d do a little experiment to see if I could produce an entire meal myself, in London. Why not go for the biggest meal of the year? Christmas dinner it was.

The fact that I don’t have a garden (or even a balcony), or much gardening experience, made the challenge even juicier. My first move forward was to attend a film screening hosted by the mulling Transition Towners in the area to see if I could get some support for my idea. ‘Mulling’ is a term used by the Transition Town to describe communities who are thinking about becoming full fledged Transition Towns.

I went along to this see a film called Power of Community, which is story about how Cuba survived the Soviet Union collapse in 1990. The dissolution sent Cuba’s economy into a tailspin. The island’s disconnection from oil supply is what hurt it most. Imports of oil were cut by more than half – and food by 80 percent. People were desperate.

In the film, Cubans share how they transitioned from a highly mechanized, industrial agricultural system to one using organic methods of farming and local, urban gardens. Things also become more localised in the Cuba because there was no oil to transport people all over the place. Happiness increased because people weren’t spending all their time travelling on crowded busses or in congested traffic from A to B. Instead, a healthy stroll would get you to your destination. They were also connecting more with nature by growing their own food.

Budding Transition Towns tend to screen this film as it shows what could happen to us here in the UK and elsewhere in the Western world as oil is becoming harder to find and more difficult to extract because the places they are finding oil are tricky to access.

The film was set to be screened in a local recording studio. It was a chilly night and I was in a room full of strangers, who also happened to be my neighbours. There was a hiccup with the film, alas. It didn’t actually turn up. Knowing what the film was about, a conversation ensued about how we’d like to see our neighbourhood transformed. It was then that I announced my crazy plan to grow my own Christmas dinner and by the end of the night, I had a garden.

A lovely woman named Kalina, now a good friend, offered me use of her neglected garden. I still grow food there and my Christmas dinner experiment was a delicious success. It’s incredible what you can grow in London, and I’m completely amazed by the sheer amount of free growing space there is around. Rarely a week goes by without someone offering me a patch of land to grow food on.

Rob Hopkins, the Devonshire man who established the Transition Town movement, has discovered that “Food is where a lot of transitions groups get started first because you don’t have to wait for anything to get started. You can start a garden share, you can start growing food, you can start window boxes, start that really, really quickly with very little resources.”

This certainly rings true. My Christmas dinner garden share was Crystal Palace Transition Town’s first food project and it has rapidly turned into many more things.

We’ve created an Edible Garden in a local park (Westow Park – in case you live nearby!). In it, we’re growing rosemary for a local Sardinian restaurant as they use the herb on their delicious flat bread, pane carasau. Our local pub has kindly let us fill our water cans while we establish a more sustainable watering system (we’re in the process of building a shed to attach water butts to). To thank them, we’ve planted in lots of tarragon, which they said they’d love to put on the menu. Just the other weekend, we had two chefs from Blanched & Shocked visit the garden with interest in us supplying them. The aim of this space is to grow food for local businesses, as well as to provide a space for locals to learn about growing food.

Another project, which I’m terribly excited about, is a Drinkable Garden in another local pub, The Grape & Grain. They have a small concrete covered space beside the pub and we’re going to completely transform it by growing hops using spent casks from the cellar as planters. There’s a wooden fence along the back wall which we’ll espalier apple trees along and there’ll be an arch of grapes with a big communal table beneath it. We’re teaming up with a local brewer to get the hop plants (and growing expertise). The plan is to do the same for the grapes and apples. Come harvest time, we’ll get these suppliers in to show the drinkers how their favourite tipples are made.

This is just a morsel of what we’re doing and there are so many other exciting things happening all over the city. There are currently 37 Transition Town initiatives in London, from Belsize to Hackney to Wimbledon.

If you go to these areas you might start to see the seeds of their work starting to fruit. In Kilburn, you can get a taster as soon as you step off the Underground as they’ve created a veg patch running the length of the platform. Brixton City Farm is another of my favourite Transition Town food projects. I met some of the farmers at a Slow Food Festival recently. I asked the obvious: ‘Where is the farm?’ The answer: ‘in everyone’s garden’. The idea is for Brixton to become one collective farm with everyone taking part, rather than a tucked away space where a few run the show. Everyone’s a farmer. It is this sort of spirit that really endears me.

Transition Towns are not just about becoming more self-sufficient. They’re about uniting communities and connecting people to nature.

My longing to leave London was spurred by a desire to live in village where you knew your neighbours and where you could escape your computer for a stroll through rambling countryside. London may not have the latter but every Saturday I now retreat to the Edible Garden and when I’m there, I spend the day with up to 30 of my neighbours who all come to the space for the same reason.

HOW TO SET UP A COMMUNITY GARDEN

To find out more about the garden see here, or pop along between 11 and 1 every Saturday.

Sorry to be a sceptic, but so many comm gardens fail in the U.S. Your number 4 should be number 1. If you don’t have a long-term committed group, within 2-3 years it’s all weeds.
What we’re trying now is a Permaculture principle: your food garden should be in zone 1, that is no further far from your back door than you’re prepared to walk in your pajamas! Therefore we’re trying to create gardeners, not gardens. Check out this great article from the New York Times, it’s very insightful:
http://www.nytimes.com/2012/11/01/garden/urban-gardens-grow-everything-except-gardeners.html?hpw&_r=0

Hi, Can someone contact me – I’d like to know more about your garden projects and maybe feature it on our video series. Thank you.