« ‘The Transition movement and the potential of local building materials’: a presentation to the EBUK conference
Garden as catalyst: the story of Crystal Palace Transition Town’s prize-winning garden »

The library was featured in the local paper, the Seattle Times, accompanied by some gorgeous drawings by Gabriel Campanario (‘The Seattle Sketcher’) which are really worth checking out. 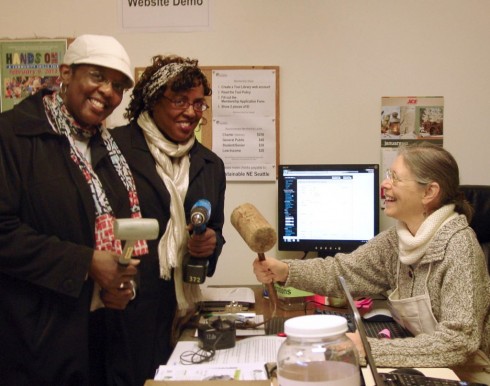 The Library’s first tools being lent out.

I asked Susan how the project had been since it had started.  She told me:

“To me it’s almost like magic.  It’s like things just started happening and people just showed up and it seemed really easy.  Mostly I’ve just felt as though it’s happening of its own accord almost.  It’s been, like I say, magic almost, like I can’t believe this is really here, we’re here, it’s happening…”

Here’s her longer response to that question:

The Tool Library describes itself thus:

“The NE Seattle Tool Library is a community-led project to provide pay-what-you-can community access to a wide range of tools, training, and advice. The Tool Library aims to inspire its community to participate in community projects such as park restorations, and pursue sustainability through fun projects like backyard gardens, home energy improvements, and water harvesting”.

I then asked Susan and Leo what their sense is of where it can all go, what can be enabled by having a Tool Library that is up and running:

One of the stories from the Seattle Times piece that was most touching was the story of how John Redfield’s tools ended up in the Library:

“Tool library member Morgan Redfield has donated some of the most expensive equipment, including this drill press and a table saw that patrons will be able to use on site. The equipment belonged to his dad, John Redfield, who passed away a year ago. Morgan, a Ph.D. student in electrical engineering at the University of Washington, has many fond memories of using the equipment with his mechanical-engineer father and still keeps a treasure chest they built together. When a friend told him about the library, he knew it would be the perfect place for the tools. Morgan, 25, said his dad “would  be really happy if he knew his tools are being used by other people.” 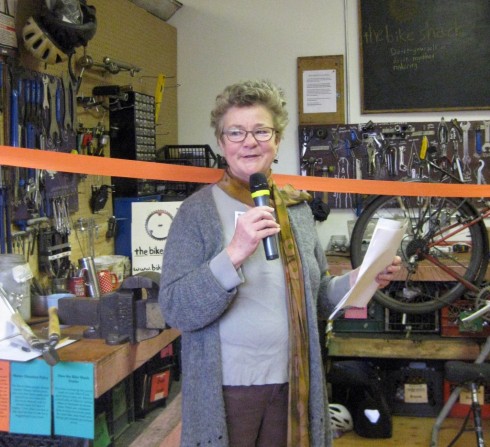 Susan Gregory at the opening of the NE Seattle Tool Library/

I asked Susan if she had any other similar stories since the Library got up and running.  Here’s the very moving story she told me:

Finally I wondered what advice they would have for anyone else who is thinking of setting up something like this.  What would their tips be?  Leo mentioned two online resources that they had found hugely useful, the first being ShareStarter, and the second a very good online webinar called ‘How to start a tool library in your community’.  Here are their other thoughts for would-be tool librarians:

You can read more about the Tool Library here.  My thanks to Susan and Leo for their time, and to Leo Brodie and Kevin Kelly for the photos.