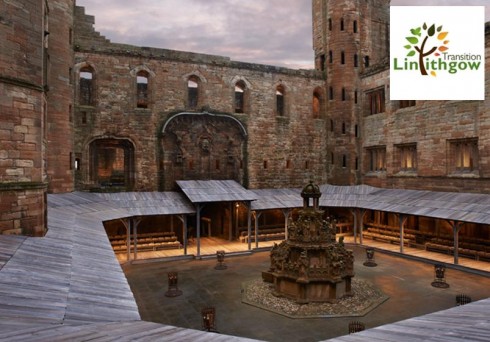 Apologies for the title, I couldn’t help myself.  Here’s a story from Linlithgow in Scotland, one which includes a request for your ideas.  So, last November Chanel held the rather swanky and illustrious ‘Chanel Metiers d’Art’ fashion show at Linlithgow Palace, famous for being where Mary Queen of Scots first came into the world.  The Palace’s courtyard was used for the show, and was suitably glammed up, with the addition of a large see-through tent on the grounds outside and the creation of a covered platform/stage thing running round the inside of the Palace.

Here’s a newspiece about it, complete with Karl Lagerfeld:

Once the show was over, and the great, the good and the gorgeous had headed home, the plan was (as is so often the case with such events) to landfill the lot.  Fortunately however, an enterprising soul at Scottish Heritage, responsible for making sure the show wrapped up without impacting on the listed structure, called Transition Linlithgow to see if they might like the timber. 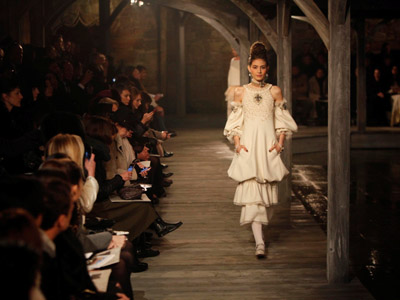 Once disassembled and stored away from the site, it totalled around 40 pallets of timber in 2-3 metre lengths and some large sections of box steel.  All the timber has been treated with a fire retardant and has been sandblasted to give it that olden days rustic look, but is otherwise all in perfectly good condition. 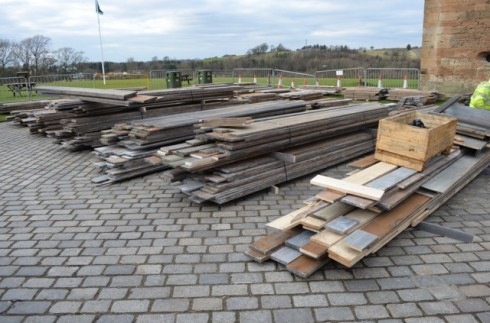 So what happens to it now?  It’s a nice problem to have!  About a third of it has already been carried off triumphantly by local allotment owners and householders for use building compost heaps and raised beds.  Transition Linlithgow are planning to sell the box steel to raise funds for other community projects.  Galgael, a fantastic project in Glasgow, are interested in taking some of the timber.  Transition Linlithgow are talking to housing associations and to local old people’s homes to see if they might use it for garden structures or whatever.

Could the group use it themselves?  Thus far most of their projects have revolved around food, energy and travel.  They have created a display in the centre of town with raised beds which has been very successful in raising the group’s profile.  They recently held their first Potato Day, and distributed over 260kg of potatoes to local gardeners in a day.  Their solar PV project resulted in over 200 local homes being fitted with solar PV as well as 2 larger 50kW arrays on the local agricultural college.  Now, were you to pass through Linlithgow by car or by train, it would be hard to miss the very visible proliferation of solar PV on the town’s roofs.  But not many of these projects call for a fresh injection of rustic timber. 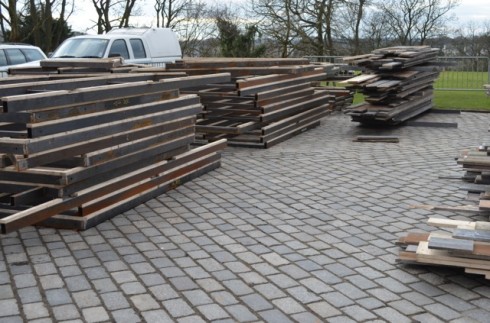 It’s a one-off injection of timber, so there’s not really scope to set up a social enterprise around it.  The group are also looking at a 3 acre site in the town, as to whether it might be used to create a permaculture demonstration site, but that’s a while off.  I asked Alan Brown from the group what would be his dream use for the timber?

Although you might think the fire retardant, Diammonium phosphate, would be so toxic that it would rule the timber out for edging vegetable beds, but Alan is confident that the principal ingredient in the retardant is also found in agricultural fertilizers, and so is not too worried about it (but would like to hear from anyone who might know better).  At the moment, the group are talking to many others through their local networks but would love to hear your ideas.  What would you do with it?

Di-ammonium phosphate — just a rough chemistry thought, that sounds like “two ammonium molecules, and a phosphorus-oxygen molecule”. Concentrated, like most substances, it would likely be toxic. What the wood contains, and what might leach off, though, sounds like common fertilizer stuff. Ammonia breaks down into water and nitrogen, the phosphates are important plant foods, too. The stuff is likely water soluble, and won’t have much presence after the first wetting or three.

As for wood, there are always fences, mailbox and planter posts, and signs that need structural elements. Pole-barns (sheds, maybe), anyone? What about hay drying racks, or livestock shelters and fencing? Then there is always charcoal. I doubt the fire retardant is any more toxic than natural wood resins. Charcoal can be used by smiths and for cooking.

Treated wood is feared because treating is usually for pests and fungus — thus toxic to most anything that comes into contact with it. It sounds like this wood would be pretty benign. I might wear a dust mask while cutting or otherwise creating dust.

You could use the wood to make waist-high planters for older people or people in wheel chairs to garden in. 12 inches (300 mm) from the top put in a bottom so that you just have a foot of soil.

Thanks for all the ideas. Much appreciated folks.