« Urban versus Rural Sustainability
Up the Hill and Down the Slope »

This isn’t really a book review, more a brief slating of a book I just ordered thinking it would be useful but actually somehow sums up a particular school of thought I strongly take issue with. **’Wake Up! Survive and Prosper in the Coming Economic Turmoil’** by Jim Mellon and Al Chalabi. 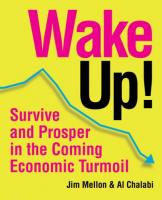 Starts off promisingly enough, funky cover, identifies problems like peak oil, growth of the Chinese economy, resource scarcity and so on quite well, and then looks at the fragile state of the world economy. All well and good. But what do we do about it?

What response should we offer to our billions of fellow inhabitants of this planet? Should we work to develop community strategies for moving beyond oil? Should we see this as a positive opportunity to build a more localised economy and to roll out microrenewables? No they say. We should work out how to invest our own money in such a way as to be more stable while the world collapses around us. They tell you which currencies to invest in, and that gold, silver and diamonds are always a safe bet in uncertain times. They refer to those of us promoting a more localised approach as “Dark Age Economists”, and seem not to notice the inconsistency between arguing that oil peak is imminent, and saying “Why do we in the Rich World continue to subsidise rich farmers when farming is one of the few areas in which the developing world has a comparative advantage?”. So, one of the best ways apparently to prepare for what they predict as “a full-scale recession, even depression” is to out source all our agriculture to the developing world. Good move.

Having painted grim scenarios of 1930s style depressions and economic turmoil, they conclude the book with the following paragraph, the opening of which I have to say, after what I had read to that point, had me laughing out loud;
>”as readers will know by now, we are not alarmist and advocating a back woodsman style of life – but we do think that as part of financial survival you should start accumulating essential commodities now, in advance of what might happen in certain circumstances”,

and proceed to recommend stockpiling toothbrushes and scissors (among other things). They also recommend that you keep six months worth of cash in the house “or in another safe place” and that you should keep some gold coins (where would you even get gold coins?) in order to secure a seat on the last bus/train/plane out of town when cash, for some reason, just won’t be enough. Doesn’t say when things have got that bad where you might actually want to go that would be any better…

This book is about the selfish response to peak oil. Me, me, me. Not a word about helping your neighbours or lifting a finger to do anything to reduce the possibility of crisis. Not a word about how out current lifestyles created the problem in the first place. I think this approach is odious. Good luck to them I say, barricaded in their houses with their gold coins and bank notes, working their way through their 4 years supply of baked beans, I want no part of that vision of the future, this is not a challenge where selfishness is an option. You could always buy 1000 copies of this book and keep it as emergency toilet roll for when you are barricaded in your house with your spaghetti loops….

Rob….having some gold and silver on hand isn’t a bad idea, and is part of the planning and preparation for Peak Oil. This doesn’t mean you are being “selfish” but that you have planned for the inevitable decline of the fiat currency that presently runs the world. Not everyone will accept your skills in return for food, etc. Having a bit of the oldest currency in the world will help prepare for the future, along with building networks, skills, etc.

Hi Rob
I’m with you….
All this talk of obscene investment growth whilst the planet is being screwed…even by those who profess to be peak oil aware???
And what’s one of the worst types of mining the earth? It’s hard rock mining, the main way to find precious metals!

Invest in the organic base of your land! Do it now while you can do it cheaply! Invest in the sustainability of your local eco-system!

Nothing else is going to matter to future generations, except whether they can braeth the air, drink clean water and have a sustainable food source.

Rob you are either a teenager or a very naive adult

Everyone has to ebe selfish to a certain extent – so that you can help yourself and your families. After yiou have done that then by all means help others.

Iif you dont look after yourself you will just be a burden on others – come on Wake Up!